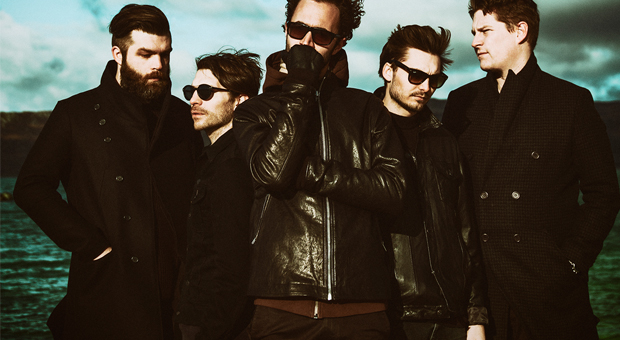 'It’s a much calmer and more exciting environment to be in': Editors chat about their new line-up and their latest album

Mercury Prize-nominated indie-rockers Editors haven’t exactly followed a straight trajectory since their ambitious debut album The Back Room back in 2005.

Over four studio albums, two of which went platinum, the band progressed further their dark, Joy Division inflected melodics before having a change of heart: in 2012, guitarist Chris Urbanowicz left in what has been since described as a 'difficult exit'.

The move paid off, and the band have now resurfaced with album number five In Dream - a towering synth-led monolith of a set, which boasts Slowdive's Rachel Goswell on vocals.

How are you doing? You must be busy…
Yes we are! We’ve been doing loads of rehearsing lately.

Can you tell us more about the making of your new album In Dream?
This is the second record with the Editors Part 2. Elliot and Justin are now fully in the band so we wanted it to be a really big collaboration between all of us. Before, on previous records – the first three – it was mainly Tom’s ideas with Chris’ stern direction. And now it’s just a lot more open. Ideas can come from anywhere. Ed would come up with ideas for riffs – it was a good working environment, and really relaxed.

Where did it come together?
We went up to Scotland to record it in the west Lowlands. We had absolutely stunning views from our studio, which was a converted barn. We were opposite the Isle of Jura and we could see the ocean too.

Did you set out with a concept or was its development more organic?
It was the first time someone’s come with chord structures for Tom to write to. That’s what Justin did. We went up to Scotland to sketch out the ideas and rehearse really. We wanted to concentrate on that process. It was very organic and there was nothing to do there, so it was either write or twiddle our thumbs!

You mentioned ‘Editors Part 2’ earlier – what was the evolution process like?
The last album was a very guitar driven, organic sounding record. We needed to do that because we had two new guys and a lot of the songs we’d worked on for almost three years – which is really too long. You don’t need to work on stuff for that long. We needed to do that and put it out, for that to be the end of it. When we started afresh with this one, everything just seemed to be right. We all get on, we’ve all got creative ideas. It’s a much calmer and more exciting environment to be in.

How did you come to work with Rachel Goswell?
She sings on a few songs on the album. We’ve wanted to work with a female vocalist and have a duet on a record for a little while and when Slowdive reformed our management were helping them with that. We’ve been fans of the band for a long time and used to listen to them in the van when we were driving around.

I went to see them play Primavera last year and met Rachel. I could just tell that we were going to get on so we invited her up to Scotland. She came into the room and just got on with everybody. We had a great time. I think her vocals really suit our band as well. I’m excited for people to hear the tracks she’s on.

How have your music tastes changed over the years?
When we came out in 2005, the landscape of bands was very different. There’s not so many about now and the ones that are around aren’t so much in the mainstream. We grew up with bands like Radiohead, Spiritualized and Elbow. We still like all of those bands but we listen to loads of different stuff – we’re surrounded by it. We go to Phonica in London and buy some weird techno music and everyone really loves the Erased Tapes label. Nils Frahm and Jon Hopkins are usually on the stereo. We’re open to everything really. I usually have my afternoon reggae session when we’re on tour, just to pep up the dressing room. Everyone likes reggae!

We’ve seen the number of tour dates in the UK and Europe you’ve got coming up. Frightening! How are you preparing yourselves?
It does get a little tricky because three of the members have got kids now. But we do enjoy it and we’ve got some big shows coming up. We’re doing some arenas in Europe. We’ve never just tried to be UK-centric, even though a lot of the home shows are sold out. I think it’s great, especially as we’re not the hot new thing anymore.

We’re excited but we’re also rehearsing hard. Sometimes when you’ve got a new record it takes a bit of time to bed in and we want to come out playing it like we’re been playing it for a year.

What’s in your tour survival kit?
Well, we’ve all be exercising a lot! Our metabolisms have changed! We tour in reasonable comfort and have our own bus for the band, which is much more relaxed than the crew bus. We try to look after ourselves, although we do have some big nights after some good shows.

You’ve been in the business for over a decade now, how do you think it’s changed?
It’s constantly changing and we just do our thing. At least people are still listening to music. It seems more popular than ever. The business has changed loads but that’s not why we get into it. Obviously we want to get paid for our work – and for everything to be fair. But we just try to make good records and be excited about what we do. I think we’ve got better as performers. We’re not the shy 20 year olds we were when we first came out. You get used to playing to people and becoming an entertainer.