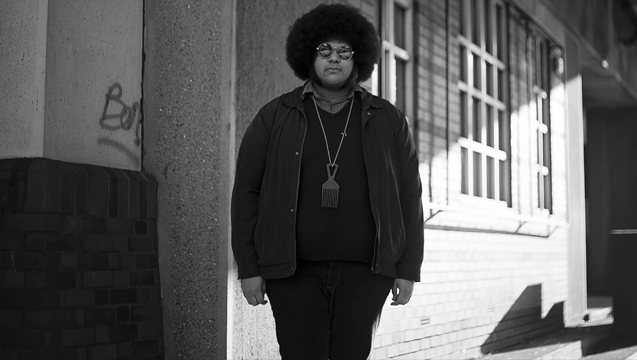 We catch up with the Teesside trip-hop wonderkid who hurls genres at one another and turns the resulting musical gloop into thunderous, glitchy rap tunes.

Dylan Cartlidge is an artist who doesn’t really just combine genres and influences, but instead hurls them at one another with abandon and turns the resulting musical gloop into thunderous, uninhibited rap tunes.

The 22-year-old Teesside trip-hop wonderkid has a knack for conjuring up musical weirdness that exudes coolness and exhibits his multi-instrumentalist talents to the ninth degree – pay special attention to Dylan’s angular, glitchy and blown-out bass playing that forms the foundation of much of his music.

Since his opening offering, a wild double A-side entitled Love Spoons/Strawberry Blonde’s Snip, Dylan has made it perfectly clear that he is in his own lane here and doesn’t really care too much about sitting within preconceived notions of genre boundaries.

Matt Wilkinson of Beats 1 Radio and BBC Intro’s Huw Stephens are among the names who count themselves as fans and Dylan has bagged himself some serious airtime over the summer from both stations.

Having just played some massive shows at Reading & Leeds Festival and inked a deal with Glassnote Records, an indie who sport a glamorous roster of pop royalty featuring Chvrches, Mumford & Sons and Childish Gambino to name a few, Dylan seems to have out-grown the tag of ‘up and coming’ in no time at all.

In October he heads out on tour with fellow purveyor of audio madness Darwin Deez and electro indie-funk hybrid outfit Bad Sounds. We caught up with Dylan ahead of his hefty October tours to get the story so far.

I wrote a rap with a friend when I was in primary school and the teachers liked it so much they made us go around to all the other classes reading it out. But seriously, when I wasn’t feeling so great in my early teens.

You seem to pull from an eclectic mix of genres - where do you think your main musical influences lie?

How would you describe your sound in three words for people who have never heard of you before?

I saw you recently proposed to your girlfriend (now fiancé) on stage during a show, how terrifying was that?

Astonishingly! I had very little time to prepare it as I’d always told Holly I’d ask her to marry me once I’d got a record deal, but anybody who knows anything about the music industry will tell you it’s swings, roundabouts and a lot of talk.

In the end I had about two weeks’ notice to pull it together and to keep it a surprise. Still today, I have no idea how it managed to come together the way it did on the day.

What was it like growing up in Redcar, do you think the place had an influence on your music?

The place has had a profoundly positive effect on me, from how friendly everybody is, to the Teesside companionship and community that flows through the people and streets of the place. It holds such a special place in my heart.

Can you tell us about your songwriting process – how do you take a song from an initial idea through to the finished article?

It’s almost always a build-up of feelings and emotions about topics and observations in everyday life that I’ve been stewing over.

What’s the story behind the tracks on the new EP?

Each has its own story but there’s an overarching theme embedded in a darker, more raw and uncut side of myself - past, present and future.

I’m loving Gus Dapperton’s jams at the moment! The guy’s crazily artistically authentic, which is always refreshing to see. I’m enjoying Magic Potion by The Black Keys, which I hadn’t heard before.

Can you tell us about the best gig you’ve ever played?

So far, the proposal show and Reading and Leeds are up there.

And the weirdest one?

I played a gig for a 21st birthday party that somebody’s uncle had arranged for them - little did I know that the guy whose birthday it was hates live music and there was some weird family dispute happening. The 11 people there from the family were split like Bloods & Crips.

The domestic awkwardness made its way over to the sound guy, who was also the uncle, and a random lass started saying how the birthday boy hates the music, she doesn’t know why he’s arranged this, then proceeded to stop me mid song and ask if we can play Christmas songs... it was surreal as fuck! Awkward, but really funny.

Things seem to be taking off right now, you’re getting a lot of attention from the likes of Beats1 and the BBC – how does it feel?

Feels the same as it ever did, which is strange. I’m still making the same noises and I’m the same person I was before, yet the perception of my music and me from the outside has changed, so it’s a little weird in that sense.

In October you head out on tour with Darwin Deez, how are you feeling about the tour?

Man, so excited, Darwin is the coolest brother and I’m honoured to have been asked to go on the tour.

Follow Dylan on Twitter and grab yourself some tickets to his upcoming tours - Darwin Deez / Bad Sounds.
Features