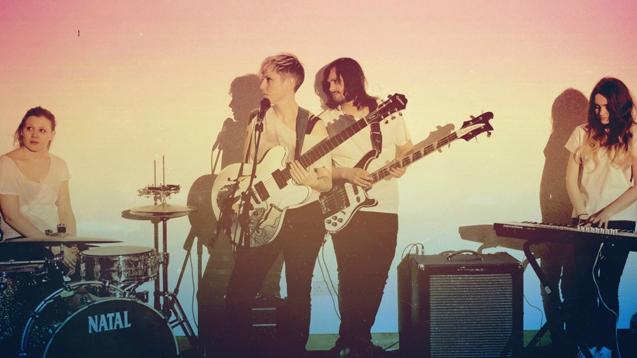 Liverpool’s She Drew The Gun have released one of the best new debut albums of the year in Memories of the Future - we meet chief songwriter Louisa Roach, one of the new queens of scouse psychedelia…

Born out of Liverpool’s open mic and acoustic nights, singer songwriter Louisa Roach and her outfit She Drew The Gun have been sending ripples up and down the country with her 21st century take on classic psychedelia.

She’s come a long way from those early days, in part thanks to attracting the support of the BBC’s Steve Lamacq and BBC Introducing. Ever since, she’s been on the up and up recording and releasing her warmly received debut album Memories of the Future with the Coral’s James Skelly earlier this year.

Louisa’s hazy blend of Portishead beats and PJ Harvey tales have also seen her win this year’s Glastonbury Festival’s Emerging Talent competition. Ahead of the weekend, we quizzed her on She Drew The Gun, the health of Liverpool’s music scene and those formative songwriting roots…

I first listened to music when I was a kid and I was always singing songs with my nan, probably old country songs, people like Patsy Klein. Then, when I got a bit older I was mad into Brit pop, acts like Radiohead and Oasis.

I actually started a degree in psychology and half way through it I started writing songs. At the end of uni I decided to give music a go. Sometimes people come out of the womb almost like a musical genius. But I wasn’t really like that. It was a slow learning curve but I eventually got to the point of being able to write confidently.

What bands were you first listening to?

Well I like and still like really good songwriters, like John Lennon, Bob Dylan; I like really good songs no matter what form they come in. So I’m into loads of different styles of music, but I need some interesting lyrics to hook me in; words are really important to me.

Your debut album Memories of the Future came out in April. What was the thinking behind the songs?

Everything has been bit by bit. You get a decent reaction to some songs, that feeds into your self belief and you start to think, ‘I could do a bit more’. I remember saying to myself, ‘I just want to make a good album that I can put out in the world’. Everything you do pushes you on.

There are so many people in Liverpool doing music as well, there’s a lot going on. I used to always ask myself whether I should be carrying on. Is this what I should be doing? And you’ve always got something compelling you to keep going. Each positive thing helps you.

It’s all about confidence I guess to a certain extent?

Yes, definitely. I just kind of put myself out there and called myself She Drew the Gun, just to see what would happen and the response that I got. And then from that, it’s built up to a band and this album.

How was working with James Skelly on the record?

It was really amazing because I was a Coral fan, then I got an email introducing me to James. He asked me round to play some tunes. He liked them, then he invited me to the Coral practice rooms and we started recording. We were going to do an EP, but we just carried on and did the album. He is really knowledgeable about music; loads of ideas, with great taste - that is what being a producer is about. And if you’ve got that then it’s perfect to work with someone like that on your tunes. You feel like you’re in safe hands.

Was there an overarching theme to the record?

What are your thoughts on Liverpool’s music scene at the moment?

There is a really good strong feeling in Liverpool, a lot of people doing music, a lot of talent around and a strong community. If you look at say Compton, it produces amazing rappers doesn’t it? It’s something about the environment that creates amazing rappers. And there’s something about the environment in Liverpool that creates great pop song writers.

There’s also a good psychedelic culture in Liverpool too. If you mix all that together, it creates a strong current of music coming from the city, all feeding off each other.

Do you think there are more opportunities now for new bands to play?

Yes, LIMF is really good, and then all those festivals like Sound City and the Liverpool Psyche Festival. There are lots of opportunities for people to just get out and start gigging. Sometimes it takes quite a long time I think to just get out. I started three years ago on my own doing gigs around town, and then started to grow the band one person at a time.

But obviously we need to keep our good venues. When the Kazimier shut, everyone was pretty gutted about that closing because I think that was one of the best venues in the country.

The Liverpool music scene is one of the best things about the city, so I think the council need to kind of respect that and promote that and look at that as an important part of what the city has got, and our culture.

For new bands or new artists, have you got any advice, any words of wisdom?

I’d say just try to take in the good things and don’t get too hung up, like just enjoy the good parts. Just keep going and don’t forget to just keep writing more stuff and I feel like I shouldn’t really be giving people advice because I still feel like I’m only starting out myself really. But just have faith and don’t stop writing.

Memories of the Future is out now on Skeleton Key records.