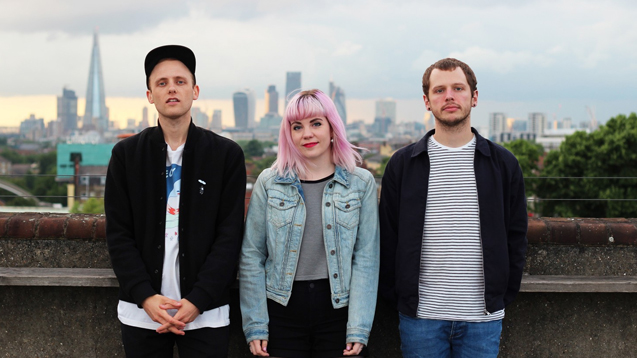 Indie trio Doe use their love of horror films and hatred of sport to power their music - we get to know them and new LP, Some Things Last Longer Than You…

Since their formation in early 2013, Doe have been punching out emotive, harmony-laden, punk-tinged indie rock to as many people as they can bend their ears to.


The group formed after members Nicola Leel (guitar, vocals) and Jake Popyura (drums, vocals) met via a classified ad, then bonded over a mutual love of horror films and hatred of sport.

Influenced by the likes of The Breeders and Sleater Kinney, the outfit have gone through a number of EPs, singles before completing their ace debut album, Some Things last Longer Than You.

Produced by Matthew Johnson (Hookworms/Suburban Home) and featuring new guitarist Dean, the LP was released n September and is the perfect encapsulation of their sound to-date. We get to know them in our new interview…

Nicola (N): I did a lot of singing when I was wee and started learning violin in school, that progressed into the realisation that what I actually wanted to do was play guitar and be in a band (sorry mum). As a nerdy teenager, the prospect of being in a band just seemed so cool, this unattainable thing that became my mission.

Dean (D): There are so many important albums/releases that totally changed my life, but the best discovery I ever made was Drugs to the Dear Youth by Tera Melos at 17. It’s still my all-time fav release and I’m 27 now so yeah, it stands the test of time. There are so many weird and beautiful sounds within each song that I can relate to without really knowing why. Their raw, untapped approach to music is always something I’ve tried to embody (and hopefully do).

Jake (J): My mum and dad were responsible for getting me started and without their encouragement I may never have bothered. They've always been really passionate about music and my dad used to write and record his own stuff as a hobby when I was little. There were always instruments in the house that I could experiment with and when I was about nine or 10 my dad showed me how to use his Portastudio four-track recorder so I could start multi-tracking my own stuff. They also introduced me to punk when I was super young and really nurtured my interest in it. This is all their fault really.

What or who made you want to start writing your own songs?

N: Writing original songs always felt like the only thing worth doing. Growing up I was in a band that did mainly covers cos that’s all people wanted to hear at remote country pub gigs. To be able to write and play our own songs to people who know and care about them is a gift.

J: Lots of people and things, but hearing Weezer's first album was a real turning point.

How did Doe form? What drew the band together?

J: Nicola and I met via a classified ad that I posted when I wanted to start something new outside my usual circle of musician friends who were still playing mostly hardcore. We met and bonded immediately over lots of things including Weezer, Riot Grrrl and horror movies. We started writing right away but didn’t form Doe until about half a year later when we met our original guitarist Alex.

Could you explain a little about the creative process behind the album - how was working with Hookworms' Matthew Johnson?

N: It was great, Matt advised that we'd need about 10 days but we only had the time and money for five, so we headed up to Leeds having never met him before, to record in a place he wasn't familiar with, and just immediately threw ourselves into this intense period together. He's a very funny person and has been so supportive of us, it feels very right that we did the album with him.

What themes unite the songs on the album?

N: It’s kind of about power balance, both in human relationships and internally. The tracklisting ended up coming together in a way where the first half of the album is very confrontational, then as the songs progress themes of self-doubt start to creep in.

Were there any artists you looked to for inspiration while making the record?

D: We made a list of releases we liked and sent those over to Matt as sort of production references. I contributed The Hot Rock, LVL UP’s Hoodwink’d, some Mitski. I think we were all aiming for a similar thing, but it was cool to see everyone’s choices and how they might inform the record’s sound.

J: I think my main reference points were Pinkerton and the first Presidents Of The United States Of America record.

How important was the addition of Dean to the line up?

J: Very. Obviously we were a band for quite a while without him and our previous guitarists Alex and Matt were excellent, but all of them have very different approaches to playing and songwriting. The way Dean approaches all that stuff is just the best fit for us. It's hard to explain concisely and I feel there's a lot to it, but in summary, this line up just makes the most sense.

Have you a favourite venue to play?

N: In London I always love playing The Lexington, but further afield Wharf Chambers in Leeds is ace. It's nice to play venues that have great sound and equipment, but DIY venues often have a lot more charm and atmosphere to them.

J: DIY Space for London is great too and always has such a nice vibe.

Have you got any advice for new and emerging songwriters?

D: Always endeavour to do something different, and put as much of yourself into the work as you can. There’s nothing worse than three bands at a show that sound exactly the same. The world needs new stuff, otherwise we’re just existing for the sake of it.

N: I think songwriting is most interesting when it’s honest and without influence from external forces, it’s when you start thinking about what a song ‘should’ sound like that you end up losing your own identity.

Some Things Last Longer than You is out now. Watch the video to Last Ditch below...