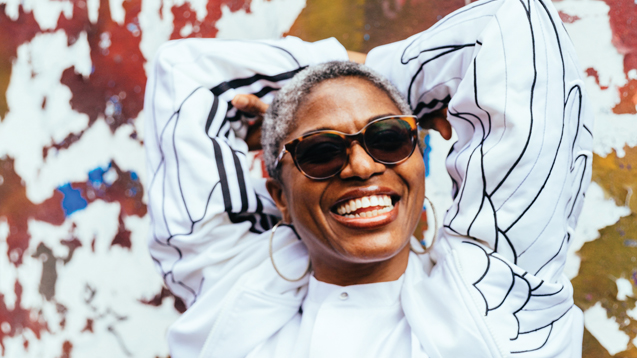 'I’ve been here since ground zero in terms of female DJs – I’m one of the original gangstas!' legendary Hacienda selector DJ Paulette on her life in music...

Dance music veteran DJ Paulette cut her teeth at the Hacienda’s legendary Flesh club night in the very early nineties, forging a path for female turntablists the world over.

From growing up as a second generation black, bi-sexual in Manchester to travelling the world as a pioneering tastemaker, she’s spent her life collecting the records that speak uniquely to her.

After falling into DJing by chance over quarter of a century ago, she's developed a knack for delivering party-starting sets that dig deep in the crates of rare groove, funk, disco, house and techno.

Now all over community stations MCR, Reform and Gaydio, Paulette is busy spreading hyperlocal good vibes around the Manchester area, while the Edit.03: Homebird exhibition at the Lowry Gallery opened last week and runs until 14 October.

Here, she tells us more about her life in music…

How did you find your way into DJing?

Well, I’ve been here since ground zero in terms of female DJs – I’m one of the original gangstas! Me, Smokin Joe, Princess Julia, Mrs Woods, Rachel Auburn. When I started out, there was Angel as well, and Jo Mills, and that was pretty much it. There was no more than 15 of us.

I was a singer to start with, I’d been in a few bands and sung backing vocals and all sorts. When I started my degree, I was clubbing and a friend passed me onto another pal who was starting a club night but had run out of money to pay a proper DJ.

Our mutual friend told her I had loads of records, because I’d been collecting them since I was seven years old. She asked me to DJ; I’d never done it before but thought, ‘Yeh, why not?’ She offered me 30 quid to play from 9pm to 2am – at the time in 1991 that was quite a lot of money! Then I went out and spent 150 quid on records (laughs).

It went really well, and I loved it! The promoters of the night – Flesh – were moving their night from the Academy to the Hacienda, and they asked me to DJ in the second room, the Pussy Parlour. That’s how my career started. I was with them for four-and-a-half-years. From there, the promoters from Garage at Heaven – James Horrocks and Thomas Foley – saw me and booked me to play their night. Wayne Kurz from the Zap in Brighton employed me as a Saturday resident too, so I did that for two-and-a-half years.

It was very much a community which looked after its own, so I got a lot of work through Flesh, and after that I was taken on by Concord Artists and my career went a bit stupid.

Did you find it easy to get into music then?

If I hadn’t started DJing on the gay scene, I don’t think I’d have been able to get into it. On the straight scene, you didn’t see female DJs at all. They encouraged women more on the gay scene. But much later, with Jo Mills, and Lottie coming through Bugged Out, it filtered through and women were being used at the straight parties as well.

How did you get into DJing on MCR?

MCR came to me because I had been working with Reform Radio since 2016. I built up a show on their station first of all. Also, I work on Gaydio, which is online and terrestrial, so they heard me on there too.

How important are those stations and communities?

They’re massively important. They do a lot of community outreach at Reform, and they do a certain amount at Gaydio too. At Reform, we’d run seminars on DJing, mental health, life skills, business and enterprise, production – all sorts of things.

These stations also offer a chance to work in radio with people who are willing to teach you everything they know on state-of-the-art equipment. They’re a feeder for the wider music industry. They walk the walk and talk the talk – they train people and then employ them.

What about opportunities for artists and bands?

Well, there’s also the live music element. Reform and MCR have live bands in the studio and they really encourage Manchester talent to play at their various showcases, events and parties. Whether you’re a singer, rapper, MC, band, or whatever, there’s space for you. There’s more freedom and space for music-makers on these stations – they give artists a platform, a stage, they say, ‘go ahead, do a show, or come and do a session’.

Do you have any tips for artists who want to get heard on community radio?

First of all, you need to be up and running on your socials. You need to be able to send links to tracks and mixes. Find out who the contacts are at the station, send them a link to listen to you, but keep it short and sweet. Start off contacting the smaller stations and work your way up. For mixes, use Mixcloud not Soundcloud.

My exhibition opened on 22 September at the Lowry Art Gallery and runs until 14 October. It’s called Edit. 03: Home Bird and it’s called a ‘gallery interruption’, where they get someone who’s not a traditional artist to create an art exhibition of sorts. I was given free rein and Home Bird is a retrospective of my career really. I’ve been DJing since 1992 and I’ve been all around the world and seen many ups and downs!

Also, my family are first generation Black British. My mum is a post-Windrush arrival and half of my family were born in British hospitals. So, the exhibition looks at gender, sexuality, identity and immigration, plus things I’ve been involved in, such as fashion, radio, LGBTQ+ and more.

We interviewed DJ Paulette for our Tune In, Turn On feature in the current issue of M magazine.