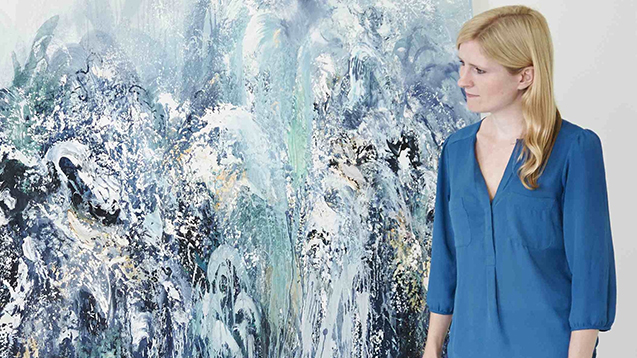 The British Composer Award winner on how synaesthesia impacts her work and her advice to composers wanting to develop their visuals...

Deborah Pritchard is an award-winning composer with synaesthesia – a fascinating condition that allows her to 'see' music.

'Ever since I was a small child, I've been aware that some harmonies seemed warm whilst others appeared cold,' she tells M.

A British Composer Award winner and NMC Recordings artist, Deborah writes music in response to artworks and also produces retrospective visualisations of both her own, and other composers' works. Her violin concerto Wall of Water is based around a series of Maggi Hambling paintings, and was performed at the National Gallery in 2015.

It's a multi-dimensional approach that helps to illustrate what it means to be a contemporary classical innovator; combining traditional and digital methods to build an immersive soundscape. Deborah also believes it provides an entry point for new listeners to the genre. ‘I've generally found that an audience which isn’t used to contemporary classical music can understand my narrative more clearly when it's accompanied by some kind of image,’ she says.

Enthralled by her unique approach to art and composing, we caught up with Deborah to find out how synaesthesia impacts her work and her advice to composers wanting to encorporate a visual element to their music...

Do you think there is an emphasis on artwork and visuals in the classical world?

There are many examples throughout history where artwork and visuals have inspired classical music. For example, Rachmaninov's symphonic poem Isle of the Dead (1908), written after a black and white reproduction of a painting by Arnold Böcklin, Couleurs de la Cité Céleste (1963) by Oliver Messiaen, where he claims that the form of the work depends entirely on colour, and the use of the graphic score, such as Treatise (1963-67) by Cornelius Cardew. The same can be said about the influence of music on art, demonstrated by Wassily Kandinsky and his synaesthetic inner need to evoke sound through sight.

Any sense of a renewed emphasis on artwork and visuals in classical music now in 2018 might be because this sound-art relationship has emerged naturally, throughout time, and has reached a point of heightened exploration. Though juxtaposed to this, there is an equal output of purely autonomous music, without programmatic stimulus or a visual starting point.

Visually led platforms are becoming more and more useful to composers who have an image-based creative process. At the moment, I mainly share my work through YouTube, Twitter and Facebook but I'm keen to add a blog and Instagram to these online platforms, particularly regarding my visual guides. There's the potential to build up a large gallery of work, as if creating your own online exhibition, demonstrating how your work develops over time and communicating your vision more fully.

Do you think more can be done by composers to communicate their works, visually?

For those composers that possess a sound-image approach, there are a vast amount of imaginative ways to create visuals, and since technology and online platforms are developing so quickly, I imagine there's always more that can be done to communicate this.

In my own experience, I've generally found that an audience who aren't used to contemporary classical music can understand my narrative more clearly when it's accompanied by some kind of image: this might be paintings projected behind the orchestra, or a visual guide that's shared on social media. I've also been developing music maps with the London Sinfonietta, produced as part of their programme notes as guides to more complex contemporary music with a timeline.

That's not to say every piece has an accompanying painting: I'm becoming increasingly inspired by the imagery in words and the visual impact of contemporary dance. I generally find I'm more frequently drawn to a visual way of working because of my synaesthesia. 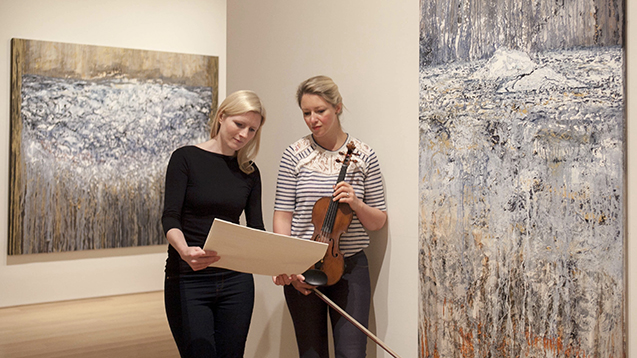 When did you first discover your synaesthesia and how do you respond, musically, to artworks?

Ever since I was a small child, I've been aware that some harmonies seemed warm whilst others appeared cold. The relationship between colours and intervals seemed so natural to me that I didn't question it, but once I began higher education – firstly the Guildhall School of Music Drama and then the Royal Academy of Music – I began to realise that not everybody experienced the same thing. I decided to investigate the role of synaesthesia within my musical language as part of my D.Phil at the University of Oxford.

I've written numerous pieces in response to artworks, including my violin concerto Wall of Water and double concerto for violin and harp Edge – both after the paintings by the contemporary artist Maggi Hambling. Wall of Water responds to the power, movement and colours of Maggi Hambling’s series of oil paintings Walls of Water. It was premiered by violin soloist Harriet Mackenzie and the English String Orchestra, conducted by Kenneth Woods in 2014 as part of Frieze London, and was subsequently performed at the National Gallery in 2015.

Harriet and I were privileged to spend time with Maggi and the paintings at her studio in Suffolk during the creative process. Rather than try to represent each painting separately, I decided to respond freely and create my own through composed musical wave, following Maggi's palette synaesthetically. Wall of Water is not only a response to the paintings by Maggi Hambling, but is also the story of a solo human voice, resonating with the powerful symbolism of the sea in human culture throughout history.

How would you describe your aesthetic?

When I engage with colour, light and darkness in my work, I become aware of a broader emotional content and hope to illuminate some kind of beauty to the listener. The process of composition connects me with not only my sense of humanity, but also with what lies beyond myself. For me, colour illuminates a sense of spirituality: a sensibility which resonates with Kandinsky who said, 'colour is a power that directly influences the soul.'

My solo violin work Inside Colour is one of my most recent explorations of colour. Even though it's inspired by the beautiful colours of the aurora, as seen from the International Space Station, many of the colours I interpreted were also internal ones, in my mind's eye.


Do you have any tips for composers wanting to create a visual identity?

If you are naturally pulled towards a image-based identity, then you might want to consider writing music that responds to artworks or imagery in literature, create graphic scores, use moving images and film, work digitally with computer technology or create visual impact through contemporary dance.

You can also make visual guides of your work retrospectively that can be created entirely digitally. Collaborations are also really exciting ways of finding a visual identity; perhaps with an artist, musician or filmmaker who shares your vision. I've recently been been involved in a project with the London Sinfonietta and Central Saint Martins where film students are given recordings of solo pieces and then make films to the music, rather than the other way round.

In terms of the retrospective visualisation you do, how does the process work?

If I'm responding to another artist's work, such as Maggi Hambling, I don't tend to work in this way. I have a very good technical understanding of paints and my visualisations are developing to the extent that I'm beginning to see them as a second form of expression, in addition to my music.

For my visual guide to my solo violin piece Inside Colour, I painted almost every musical gesture in a continuous visual narrative, with a timeline below. There are elegiac green forms at the beginning of the work and more solid, blazing red gestures in the middle of the piece. The images and music are linked so closely that I can also paint live to this piece, showing in real time how colour links to sound.

What can composers do to stand out, visually? Are there any innovative platforms or events?

Every composer will have a slightly different way of working and if they give themselves the time and space to explore that in an honest way, they will find something very special and unique to them, that will help them to stand out naturally.

There are many events, festivals and venues who are interested in this kind of interdisciplinary approach, particularly as it draws in a demographic who might not be your average contemporary music listener. I definitely found this when Wall of Water was performed at the National Gallery in 2015, and at the Aldeburgh Festival in 2017 with my new double concerto Edge.