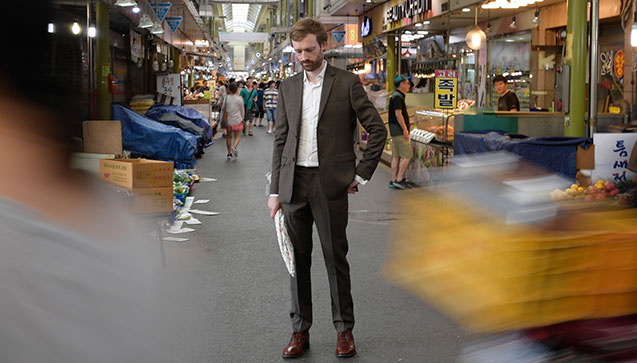 The lucid avant-folk troubadour on how he's bringing his ace LP Crippling Lack to life this week with a UK tour featuring James Yorkston, Gareth Bonello and more...

Lucid avant-folk troubadour David Thomas Broughton has picked up everything he knows from listening hard and experiencing widely.

It’s a hands-on approach that sees him reject the accepted pathways in search for a purer form of self-expression – and his results are achingly humble.

Having navigated his own acoustic route for the best part of a decade, his last three-part album, Crippling Lack, saw him hook up with the likes of Beth Orton, Aidan Moffatt and Sam Amidon.

Recorded piecemeal while he was based in North and South Korea, David would visit artists in their home, or collaborate over email, with the songs gradually percolating over the ether.

The British leg, which kicks off tomorrow (15 November) in Brighton, includes another slew of ace collaborators, such as Neil Pennycook, Gareth Bonello, RM Hubbard and James Yorkston, who promise to bring another new slant to the songs.

What was your original thinking behind the Crippling Lack album?

The project started as a simple collection of songs. In that respect, it was no different to the origins of the rest of my recorded output. The full scope of the album began to become apparent over time. The thread through the songs, however, are various states of awkward, conflict, disappointment, inadequacy, and reflect upon universal themes inherent to relationships. This tends to be where my music stands - a kind of truth or confessional.

Inspiration is always from the world and people encountered through life - some thinly disguised observations or memories or existential pondering.

How has the project grown and evolved since it started?

I stayed a few days with Raphäelle Duquesnoy, a sound designer/audio engineer based in France, and we spent the time in her studio recording the basic songs, just me playing them through, voice, guitar and loop. With the occasional sound texture, but pretty much 'as live'. The only fun additions we're to use some of the things she happened to have around the studio, like a great vintage Farfisa, and someone’s toy piano.

The process grew along with the scope of the project. It was propelled by a degree of necessity. I was living on the other side of the world, so the tracks developed by a process of email exchange and file transfer. It became apparent that it stands as both a testament to the links you make as a touring musician, the other musician friends you make on the way. I had long had people in mind to make an appearance on certain tracks - capturing their contribution was varied - some were able to email home recorded components, others I was able to capture 'in the field' as I visited them at home. As such, it also stands as representative of the internet age where friends and projects can be made via your laptop or smartphone.

There was thought to pick a selection to make a concise album - perhaps more commercially digestible, but everything had a place as a step on a journey. I'm reluctant to polish and trim things as I have a self-imposed ethic to bare it all, to reinforce the honesty and sincerity of creative output. The idea is to let it be seen as truly human (exposing the limitations of my technical skill, errors and bum notes remain).

Why did you want to release the record simultaneously in three countries?

The size of the recording spread across three LPs perfectly, and where the splits dropped produced three different stages of the 'journey'. I had been working with the label in Scotland and the label in the US previously and really liked the idea of a kind of treasure hunt for collectors to complete the puzzle of the record by seeking out each volume separately. (Of course, logistically, we had to compromise, so purchase of the three volumes together was possible). But the three labels on three territories is symbolic of this idea but also of the way the record was put together in the first place, with disparate contributions from across the globe.

How did you find the experience?

The process was very drawn out - but I guess not much more than a lot of well worked on albums - around two or three years of back-and-forth was slow at times but ultimately an intriguing way to work. I did enjoy the process. The excitement of seeing what new nugget of addition or edit would drop into the inbox. The compromise on the release concept at the end was understandable, and heavy vinyl does nothing positive to the bank balance, so we had to remain very limited, which I think is a nice idea too.

You’ve collaborated widely for the tour – how did you pick the people to work with and what do they bring?

The starting point for the tour collaborations was the idea of musical friends I've made over the 10 plus years as a touring musician - which also links to some of the thinking about the record. The people had to be local to each show and have had some link to me in some way. As time has gone on there a few more tenuous links but rewarding to know people who are keen to join through nostalgia or the fact they feel influenced by my work or performances in some way. They are bringing a range of new textures and some bring an enthusiasm for the theatricality of live performance too - it is often echoing or enhancing elements of what I do in ways I am unable to do through my technical limitations.

What have you learned along the way?

There is a lot more positivity if you let yourself be open to it. Do not dwell on the negative reviews you may have encountered because it is just someone who doesn't feel part of your world, when there are more people than you might expect who are. I also learned to trust my own art and be more confident in it.

How has your time in Korea influenced things?

There was a great feeling of constraint being in Korea where music, in general, is performed by people with training. It really ratcheted up my lack of confidence in myself as an untrained musician. And it has also made me realise that 10 years of building an audience in the UK and Europe means a great deal - I was overwhelmed by the fact I was almost starting from scratch. It has taken a bit of time but I'm comfortable now knowing a little more about the fruitful and experimental underground scene. I think that the full influence of the Koreas will become apparent over a long time.

More recording and collaboration - I can't say what will bear fruit, but Korea, Japan, China and back in Europe. Feeling excited about the next chapter!