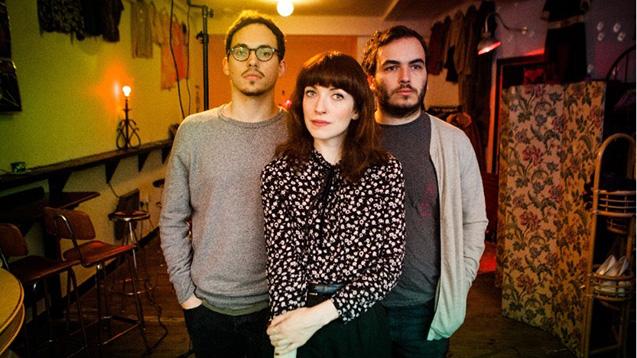 'We really didn’t know if we had the ability to do it - we just jumped off the cliff:' Daughter on their 2018 Ivor Novello Award-nominated videogame score for Life Is Strange...

Since first emerging in 2012, they've touched hearts and minds on stages across the globe and have soundtracked scores of moving moments on the silver screen - 'we always get the deaths and break-ups’, singer and songwriter Elena Tonra laughs.

So when they decided to transpose their sound onto the world of videogames for the first time, hopes were high.

Fast forward nearly two years and Life is Strange: Before the Storm, a game from Tomb Raider makers Square Enix, is now out in the world, with Daughter’s electronic-drenched accompaniment released as a standalone LP.

Testament to its success, the score was nominated for an Ivor Novello Award today (24 April), marking the first time a 4AD band has ever been acknowledged by the songwriters’ accolade.

Here, they tell us how they feel about that, serve up some advice for artists thinking of leaping into the scoring unknown and let us in on life four months in to a six-month sabbatical…

How does it feel to be nominated for an Ivor Novello Award today?

Igor: We made the music with a specific purpose in mind – to soundtrack a videogame – and this is a really nice bonus. It’s lovely to be recognised for it.

You’re the first 4AD act ever to be nominated for an Ivor – what does that mean to you?

Igor: It’s amazing, it’s so cool. What’s nice about the Ivor Novello Awards is that it’s about songwriting and it feels a little bit more true to the music. It’s so weird because it’s for a videogame soundtrack, it feels like such a new category. I guess we managed to break through into The Ivors!

How have Daughter fans reacted to your videogame score?

Igor: People have reacted really positively, and people who were fans of the original game are fans too. That’s been really nice and we’ve won a few people over in the process.

Elena: That was the worry, because the first one was such a well-loved game and the soundtrack was also really well-loved – we were going into something close to a lot of people’s hearts. There was some pressure to make something that lived up to the first one. But the reception has been really nice and people who knew about the game are now learning about our albums and people who knew about our albums are now learning about the game – the crossing over of such different worlds has been very cool.

Has the process of putting the soundtrack together changed the way you approach music-making?

Igor: We learned some big lessons. This was something with a deadline, we were responsible for something. Also, people had expectations of what that should be, not just in an artistic sense but also that it needed to fit certain briefs and themes.

Every day we had to sit down and come up with stuff, and after a while we got into a rhythm. We were more quickly inspired, and it was very different from when we’re being our own boss and we get inspired when we feel like it. We came out of the process feeling like we were in a flow and as we were making the soundtrack we were also developing ideas for future Daughter stuff.

What was it like to get into the headspace of the videogame’s main protagonist Chloe?

Elena: I went into it thinking it might be hard writing about someone else, but the more I read the script the more nostalgic I felt. I suddenly remembered what it was like to be a teenage girl and I unleashed a lot of stuff I’d stored away! So that was really cool. Sometimes I felt like I was writing about myself but it fitted with her. There are so many themes which are universal it doesn’t matter how old you are.

Do you feel like doing this has opened up a new avenue for the band?

Igor: We’ve always loved seeing our music for picture and to get the opportunity to write something specifically for picture was really exciting. Now that we’ve done it once, we feel like we could definitely do it again. We feel more prepared this time!

Do you think sync is a good thing for artists to be getting into?

Igor: It’s obviously become a lot more common, especially with the explosion of TV. People get really attached to series now and the songs that are associated with them.

Elena: People will come across you accidentally who wouldn’t have before. A lot of people have said they’ve heard us on a certain film or show and I think it’s a really good thing to do. Sometimes there can be a negative view of it, in terms of selling out, but I really don’t see it like that. It’s really beautiful to spread your music through different ways. A lot of the scenes we get approached for are often really emotional, which I feel really lucky for. We always get a death or a break-up – really good scenes!

What’s happening with you at the moment?

Igor: We’re on a six-month sabbatical at the moment. We don’t have any shows booked.

Igor: After six years of always working towards stuff, we wanted some time off to rejuvenate the band. We’re feeling really excited about getting back together.

Elena: It’s been great to take some time to actually miss being in the band! I feel we’re individually working on things. Igor is learning and doing courses to learn more about making music. I think this time will make us coming back together even more unified.

Are you still getting a creative itch when you’re not working on Daughter?

Igor: Totally. The music-making never stops and there’s a growing stack of ideas with Daughter written on them. It’s a compulsion we have.

What advice would you give to another band thinking of taking on a videogame score for the first time?

Igor: Because the game was being developed as we were making the music, we had a lot of freedom. I’m not sure that’s always the way when working on scores.

Elena: We did a lot of winging it! (laughs) We could have just said no and shied away due to the lack of confidence. We really didn’t know if we had the ability to do it. We just jumped off the cliff! I feel that sometimes it’s great to take those risks and just try to do our best. We could’ve just run away but we actually did it. So yeah, winging it and jumping off a cliff!