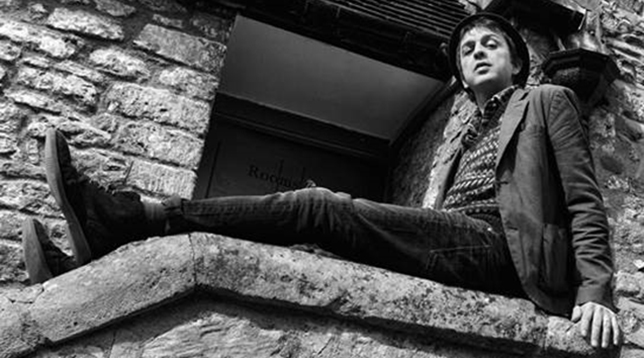 His first serious endeavours in music led him to brothers Gaz and Rob Coombes and bassist Mick Quinn in 1993, and together they formed Supergrass.

Their debut single Caught By The Fuzz (1994) exploded just as Britpop was breaking, catapulting them into a career spanning 17 years and six albums, including the big-hitting I Should Coco, In It For the Money and Road to Rouen.

Since the band’s split in 2010, Danny’s been busy working on his spirited solo project Vangoffey and appearing on Celebrity Masterchef.

The fruits of his musical labours was the pop-perfect debut album Take Your Jacket Off and Get Into It, which landed late last year.

Now preparing for the festival circuit and a headline tour in the autumn, he’s assembled a band around him, including Drew McConnell (Babyshambles), Louis Eliot (Rialto), and Marley Mackey, the son of Pulp bassist Steve Mackey.

We chew the fat with Danny to find out who he first caught the music bug from, what his weirdest Supergrass memory is and what’s next for Vangoffey…

What music did you grow up listening to?
Born in 74, I grew up listening to early eighties chart music. I was very proud of my seven-inch singles which included Dexys Midnight Runners, Thompson Twins, Howard Jones and Adam and the Ants. I later got into psychedelic rave music, then in my later teens Bowie and seventies punk.

How did you first get drawn into making music?
I first got drawn into it by my older brother and his friends. They started playing guitars and old drum kits and I was transfixed. I made my own drum kit out of Tupperware boxes and used chopsticks for drumsticks. Obviously I was ignored as I tapped away in the corner, but I developed a real love for live music. This soon led to my first pre-pubescent band... The Fallopian Tubes.

What’s the inspiration behind your debut solo LP?
I guess my inspiration for the album was my present situation in life. Family, friends and modern day living. Oh, and Phil Spector's wife.

Where was your head at when you were putting it together?
I was in a relatively good place before I recorded this album. Bored, hungry and looking for acceptance. Perfect.

How have your attitudes to music-making changed since the Supergrass days?
My attitude to making music hasn't seemed to have changed since I last tried it. I suppose it’s more of a personal thing now as I don't have Gaz and Mick around to democratise everything. I guess I do what I think is right... which feels pretty good.

What’s your abiding memory of your time in the band?
One of my abiding memories of the Supergrass days is arriving in Tokyo for the first time. Spaced out and jetlagged, we wandered around what seemed to be a completely different world, looking for a bar. Three pints of Asahi beer and sake to an already jet-lagged and spaced out Gaz and Danny makes for extreme weirdness and loss of bearings.

What or who have been your biggest musical inspirations?
A few of my inspirations are Bowie, Ian Dury, Kenny Everett, Betty, Elliott Smith, Peter Cook and Dudley Moore, Thora Hurd and Robert Smith...to name a few.

What was the last record you bought?
Rip it Up - Orange Juice. Haven't heard it in ages.

What’s next for Vangoffey?
We will be playing at a few choice festivals this summer, with a headline tour in October. Also I've started recording some songs for the next album. Ooh, and I'm getting a tortoise.

In 2012 Supergrass reunited to receive a PRS for Music Heritage Award at the venue they were first signed, The Jericho Tavern in Oxford. Watch the video interview: