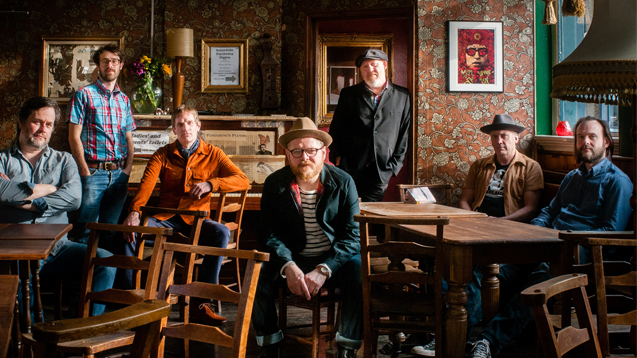 Danny And The Champions Of The World

‘Play music that you love madly with your best friends, get your other mates to come to your shows and have a brilliant time’ - Danny and the Champions of the World tells us how new acts can win in 2017…

While it’s hard to categorise as folk, soul, alt rock, country or Americana, it’s easy to agree that Danny Wilson is one of the most under-rated songwriting forces in the UK.

As the musical engine room powering Danny and the Champions of the World, over the course of five albums the outfit have carved themselves a reputation as a force to be reckoned with. Theirs is a rich and rootsy, life affirming sound perfected by a tireless gigging schedule that has taken them all over the world.

Now with a double album Brilliant Light due in June (the follow up to their acclaimed What Kind Of Love from 2015), a huge tour in the diary for September, the band should be on the cusp of the mainstream devotion they deserve. Ahead of the release, we caught up with Danny to delve into their songwriting roots and beyond...

Music was a big thing in our house. My dad gave us the romance of rock and roll, told us tales of buying singles for the jukebox in his family's milk bar in Melbourne in the fifties. He spoke with wonder about Frankie Lymon & The Teenagers, Dion Dimucci, Jackie Wilson and would play us Springsteen bootlegs from 1978 as if it was a treat. Southside Johnny was like a hero at our place. It's hard to not love something presented with such romance and joy...

I got a guitar from a jumble sale when I was about 12 and I wrote Danny 'Guitar' Wilson on it. Then I started learning Eddie Cochran songs and absolutely took for granted that the next step was writing songs. So I did, didn't really give it much thought. I wanted to write songs like Chuck Berry. I still do!

How did Danny and the Champions of the World form?

It's been a pretty organic unplanned journey. When Grand Drive took a break I wanted to do something completely freewheeling and less structured. I had met Robin and Joe Bennett (from Goldrush, The Dreaming Spires and creators of the Truck and Wood festivals) and we started The Champs.

It was all inspired by Ronnie Lane’s Passing Show. Now six or seven albums later amid various comings and goings, the line up has become totally settled. It's a more conventional set up in a way but I think we've managed to keep the freewheeling romance at the core of it.

What artists/records have helped inspire the group?

I love music and songs and singing and records and the friendship more than I ever have. I love girl groups, doo wop, rock and roll, folk music, reggae, country. I want to make people feel like those records make me feel. That's the dream. I guess Dobie Gray's Drift Away probably sums a lot of that stuff up...

What Kind of Love is your most recent LP and received great acclaim - how did you make the record?

We recorded it at Reservoir Studios near Finsbury Park in London. It's run by Chris Clarke from the band and is like our clubhouse, our spiritual home. We like to imagine it's like our own Stax or Studio One. We want to create our own legend rather than visiting other legendary places hoping for some of the old magic to rub off. I believe that the real magic is in the band, the songs, the chemistry.

We did what we always do, which is write a load of songs that we love and then play them as if there wasn't a record button being pressed, a bit like that 'dance like no one’s watching' quote. The records mean the world to me but there'll be another one this year and another down the line after that one. It's not for us to say which is best. We put the same love and sweat into them all.

How have you evolved as a songwriter over the years?

I try not to analyse or attach too much importance or mystery to songwriting. If I've got an idea then I'll write one but I equally enjoy sitting down and playing a Sam Cooke song. I've really enjoyed writing more collaboratively in recent times. I like to sit down with a mate and write. It doesn't need to be good or a hit. It can just be fun. There was a time when I wanted to be wise or say big things, but now I'm really happy if people dance.

What are your thoughts on the current health of the Americana/country music scenes in the UK?

I think with the advent of the Americana Music Association UK and all the great work they're doing there's undoubtedly a very welcome light being shone on some brilliant bands and songs. There's now an official Americana chart which is great. I hope we get in it! There's always been amazing UK singers and bands taking the sounds from America and then selling it back to them. The trick is to make it your own. Nick Lowe's always done that and The Faces were masters.

How important is playing live to an act such as yourself?

It's what we're all about. The albums are just maps of where the shows might take you. It's a collaboration between the band and the audience, both contributing to whether a night might actually lift off and fly. Let's make Monday night feel like Saturday!

Have you got any advice for new and emerging artists?

Don't get lost in 'the biz', don't make getting 'signed' the point of it. Play music that you love madly with your best friends, get your other mates to come to your shows and have a brilliant time. Don't be precious. Don't be scared.

Our new album is out in June on Loose Records, then summer festivals, then touring in September onwards. I’m really excited about the future.

Listen to Swift Street from the new album Brilliant Light.