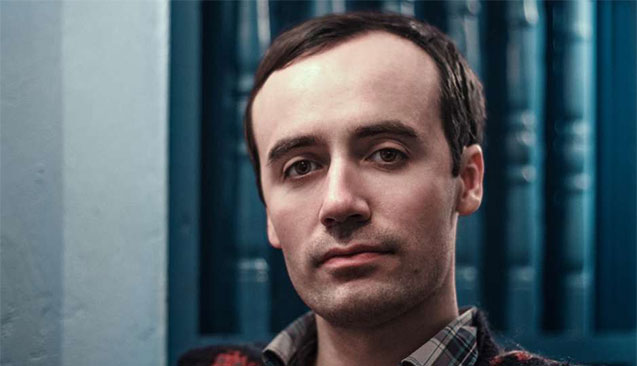 'Often my music finally surfaces after a process of self-deprecating trial and error': Grumbling Fur and Guapo's Daniel O'Sullivan on cooking up his ace new album VELD...

Genuine eccentric Daniel O’Sullivan has been rustling up otherworldly invocations and strange appropriations of pop, rock, drone and electronics since his teenage years.

His uncanny notions of melody and harmony, tension and release, have seen him through many incarnations over the years, more recently with Alex Tucker in Grumbling Fur, Stephen O’Malley in Æthenor and This Is Not This Heat, along with This Heat founder Charles Hayward, plus Alexis Taylor and Thurston Moore.

Today (Friday) marks the release of his latest solo venture, VELD, an oasis of lysergic songcraft and pop finery. On it, Daniel’s multilayered melodies are teased to the fore, helping him turn in one of the year’s most compelling pop records so far.

What sort of stuff did you grow up listening to?
The really formative stuff would be things like the music to The Snowman. Also The Beatles, Kate Bush, The Doors and Muddy Waters, and the soundtrack to Betty Blue. Basically, things that were in the house, things that my family were interested in, all for different reasons. For me, The Snowman, was really important, it was a proper introduction to melancholy. It was just the zeitgeist for eighties children.

It's all about the music - the way it carries a mood of empowerment and fantasy just really got me upset. Later, one of the first pieces I learnt on the piano was Walking in the Air. It was helpful to deconstruct it and look at it in terms of intervals and scales. It helped me realise that all music and all emotion in music is a construct.

It's not demystifying it; it's still magical. It's still this incredible thing that is subject to the law of harmony and dissonance, but it was just helpful for me to understand what I was going through when I first saw it.

Is that what first inspired you to make your own music?
Well, since then, I’ve gone through so many phases of music. I've always been dervishing around different trends. It was probably more getting into hardcore and punk. I found that DIY thing really interesting when it was part of the culture, growing up. Being into skateboarding and putting on shows, and just watching incredible bands who were touring on a shoestring, and realising there was no excuse…

So do you remember your first band? What was all that about?
My first band was with my friend, Luke. I was playing drums; he was playing guitar. It was really sort of scratchy, fast punk-rock. There were some good things in there. I haven't listened back to the tapes for years. Funnily enough, that was a real seed, because it grew into many other collaborations.

You mentioned harmony and dissonance a minute ago – how do you incorporate that in your own music?
Well, the way I see it, harmony and dissonance are the way everything works, according to orbital resonance. You can go through all these various combinations in tone, and then you arrive at these intervals: second, third, fifth, seventh, ninth, and you get these varying effects. They're irresistible. But what's even more irresistible is when you come away from them, knowing that the possibility of arriving is always there, and playing in between the spaces and the phasing of polarities.

How do your tracks start life?
Music is never really available to me through coercion. I need to be ready to do it. Sometimes, I can spend six or seven hours working on something really elaborate, and then end up only keep two or three seconds of it. I find the jewel of the lotus that's been overlooked the entire time, and it finally surfaces after this process of self-deprecating trial and error.

Sometimes, it's a word that will trigger me off, or just something I read about or felt. Often, it's things that I feel. It doesn't really come from academia.

How does your process differ when you’re collaborating with others?
When I work with Alex, in Grumbling Fur, that's its own special thing. We've slowly whittled down a shorthand between us, where we're so much on that sort of Grumbling Fur frequency, whatever that is, that it's quite easy for us to tune into it and generate music.

But every collaboration is different. Sometimes, you go in with nothing, and you come out with something equally as ephemeral, like working with free improvises or whatever. Then, other times, like at the moment, I'm playing in This Is Not This Heat, which is just a sort of reconstituted version of This Heat, playing music from those two records. That's just a process of excavation, I think. It's going into somebody else's world and pulling out the details, and deconstructing what it was that they did. It’s so magical for me.

Where do you feel most at home? Making electronic stuff, or drone, or the more rocky stuff?
I don't know. All of the above, really. I don't see home in terms of a stylistic tendency. Home, for me, is like the multiverse. Home, for me, is that lack of doubt, lack of fear traversing what would be considered opposing ideas in music.

I like it when you can hear quite archaic things with very hyper-modern, polished things, but all kind of smashed up together. I like it when polarities come together, and in that sense, they transcend what they're supposed to be. They get atomised.

You’re writing a piece for Echo Collective – how did you get involved with them?
Well, they play with quite a few alternative composers, I guess, like Jóhann Jóhannsson, Stars of the Lid and A Winged Victory for the Sullen. It's run by Neil Leiter, who's an American guy living in Brussels, and he and I are friends. He suggested it to me, and I didn't really take him seriously, until one day… I've suddenly found my muse.

What about VELD? Where did you find your muse for that?
VELD is based on a story by Ray Bradbury, where this family live in a house called the Happylife Home, and they're living with virtual reality technology. The kids go into this gaming world, where they can create whatever environment they want, and it's all penetratingly real. The parents get paranoid. They want to bring them back to a more basic way of life. Eventually, the children lock them into this African veld, and the parents get eaten by holographic lions.

Wow. So what can we expect from your upcoming live shows?
I've got a launch gig at Café Oto, where I'm going to do the VELD music with a group. We’re going to try to perform the music as it sounds, or as close to how it sounds on the record. I want to do that at least once, just for my own self-satisfaction.

Beyond that, I'm going to be doing some solo performances. I've got this piece that's called The Honourable Daines Barrington. Eventually, I'll release a record of the music for it. It's kind of an atavistic vegetable man.

Brilliant! So will you wear a special costume when you're performing that?
Yes, I'm wearing a very, very awkward costume that's very difficult to see and perform in. It's making the whole thing very difficult!

Daniel O'Sullivan's VELD is out on 30 June via Tim Burgess' O Genesis label.