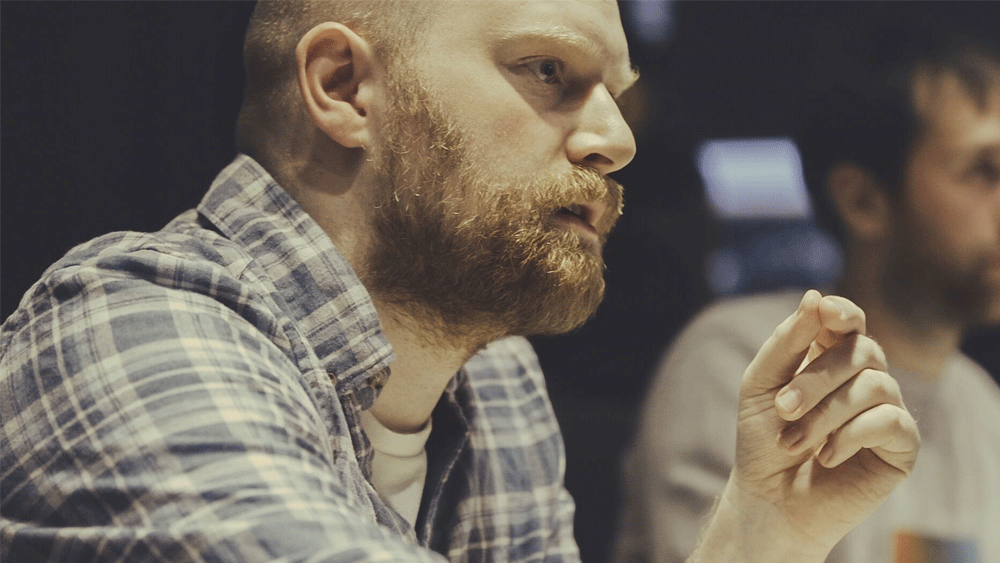 With his debut album, Islandia, Northern English composer Daniel Elms shares a magical vision of island enclaves, folk songs and maritime chants. We get the inside track...

The set includes five pieces for chamber orchestra, electric guitar, synths and voices, as Daniel combines all the shapes and sounds that have stirred his career so far.

He looks deep into the heritage of North Eastern England for his muse, drawing inspiration from its quaint coastal towns and post-industrial landscapes.

The album started life far away from his native town of Kingston-on-Hull, emerging at the former Southern English home of Imogen Holst in 2015.

A geographically sprawling affair, it was later recorded at Abbey Road Studios in London and will see its release on New York label New Amsterdam Records this Friday (21 June).

Among its many highlights are Bethia, a nostalgia-fuelled love letter to Hull, which was performed at PRS Foundation’s New Music Biennial for the Hull City of Culture celebrations in 2017.

Made for acoustic and electronic instruments, it celebrates the maritime history of the city using re-imagined sea shanties and hymns.

Here, Daniel chats to us about the experience of creating Islandia, what he’s learned from making his first album, and why genre-hopping is in his musical genes…

What’s the thinking behind Islandia?

It's an expression of the past few years of my life. It reflects the subjects and ideas that have been dear to me over what has become a significant period of personal and musical growth.

The individual tracks each have their own subjects to discuss — The Old Declarn and Bethia both have their origins in specific pieces of folk music, for example. It is also an album that tries to diversify the chamber orchestra by including electroacoustic instruments as ‘blended’ and valued members of an ensemble sound, rather than overpowered adjuncts.

Finally, where possible, I've worked with Hull- and Yorkshire-based artisans to celebrate the resurgence of artisanal crafts in my hometown.

When and where did the music start coming together?

I first sketched the album in autumn 2015. I'd locked myself away on the Aldeburgh coast at the former home of Imogen Holst, listening to the waves and storms rolling in.

You recorded it at Abbey Road Studios – what was that experience like?

I'd been to Abbey Road a few times before but recording Islandia there was something entirely different. I was in my late teens when I decided to pursue a career in music and it was also around that time that I was listening to Pink Floyd's Dark Side of the Moon on repeat. To record Islandia in the same room that Dark Side was recorded was…well… it felt like the fulfilment of something that I'd promised to myself a decade and more before.

You experiment with a broad range of styles and influences on Islandia – was it important for you to push your boundaries with this record?

Not at all. I don't choose from a list of boundaries to push whenever I sit down to write — I can’t get on board with that ‘shock tactic’ mentality. If anything, if I’m being pushed it is simply because of the diversity of music that I listen to, and the other disciplines and subjects that I draw inspiration from, and how those influences manifest in my work.

There is often an expectation to conform to certain genres or schools of composition, partially due to long-standing close-minded opinion. My music isn't accountable to any one style, school, or method — it’s me and my influences — and if that pushes boundaries then so be it.

What did you learn along the way about making an album?

You will fall asleep worrying about the latest unsuccessful batch of vinyl test pressings. However long you think you will need from the inception of your album to its final release, you will need to add another 100 percent on top of it.

You will find unfettered enjoyment in paper stock and the texture of ‘reverse board’. Risograph printing is wonderful, though you’ll worry that your enjoyment of it results from watching too many episodes of Saved By the Bell.

Social media eats pictures for breakfast, so if you have the ‘inspired’ idea to use only instant film to feed it, you yourself will only be eating beans for breakfast, lunch and dinner — they are all you will be able to afford.

Is there anything you would do differently next time?

If I were to remake Islandia tomorrow, I wouldn’t do a single thing differently — I had an incredible time making it. My new material, however, is following its own course and I'll need to rethink the whole production process for the next album: there will be significantly more electronic elements, found sounds and spiritual machines. It would be great to record the next album on location and lock myself away for a few weeks.

How does the album reflect you as a composer?

Islandia has become a personal manifesto to pursue art at all costs. It is a consequential period of my life — a period of questioning myself, my music and my influences – instilled in music. And it draws all it can from the post-industrial landscape of the North — my home; my roots. The album reflects my past and present, and the final track, Bethia, begins to look to the future. I never set out to make something so personal.

You’re going to be playing the album live – how are you preparing for the tour?

I'm working with a great group of musicians from Manchester Collective and the Jubilee Quartet, plus some old friends who are the most wonderful players. I've also spent a long time sourcing and tweaking amplifiers and synthesizers to ensure that the electroacoustic instruments blend just like any other orchestral instrument, rather than having them pump out of a PA — it sounds like a subtle difference on paper, but treating electroacoustic instruments with this degree of respect, and as true members of the ensemble, makes a world of difference to the quality of sound.

What else is keeping you busy this year?

After the tour, I’ll begin sketching some new ideas for a collaborative piece I'm working on with choreographer Alexander Whitley — an intimate, visceral new work for music and dance.

I'm also working on a new piece with librettist Sophie Rashbrook, and there’s a very exciting symphony orchestra project in June next year... but I don't think I'm allowed to talk about that yet.