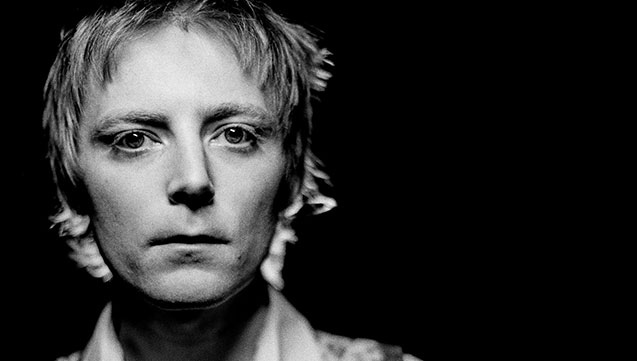 Ex-Fat Whites and Phobophobes sticksman Dan Lyons on going solo, hooking up with Sean Lennon and why honesty always trumps in music…

Dan Lyons has previous form as chief beatmaker for the Fat White Family and Phobophobes, helping propel their sonic hedonism firmly into the psych/garage camp.

He was around both bands during increasingly chaotic outbursts, which led to a fracturing of the Fat Whites core crew and the untimely death of Phobophobes’ lynchpin George Russell in 2016.

With the world around him gradually unravelling, Dan became increasingly focused on his own music, swapping London for Paris and drums for the guitar.

Two years on, and Dan has stepped out solo with a pocketful of dreamy monologues dripping with the psychedelic melancholy of Nick Drake or Syd Barrett.

Here, he lets us in on recording his latest track, Gargoyle, which features some lyrics from Sean Lennon, making the transition from drummer to frontman and what he’s learned from life on the sharp edge of creativity…

Something I always go back to is EVOL by Sonic Youth, I discovered them relatively late to everybody else I know, but that album is amazing. I grew up with The Beatles, Talking Heads 77, Eurythmics’ Touch and Tom Petty's Damn the Torpedoes. Pop music that is simple, clever, and unashamed. The White Album is my favourite Beatles record at the moment. I go through phases. Also, the Cornology Greatest Hits album by the Bonzo Dog Doo Dah Band.

How did you start making music?

I've always been surrounded by music, it's what my father does, what my uncles does, so it was pretty obvious from quite early on that I was going to play too. I learned drums after a snare drum appeared in the hallway - my father was working as a teacher at the time and had brought it home. I couldn't stop messing around with it, much to my parents’ chagrin, and I started lessons shortly after that.

The guitar was a much less formal affair; I love the range of notes you can play on it. Andres Segovia said that playing the guitar is like having an entire orchestra at your fingertips.

You’ve drummed with loads of bands over the last few years – what has it been like to go solo?

Well, it's a very different kettle of fish. Drumming in a band, at least in most of the bands I've played in, leaves you little room for getting involved in any real creative process. There's always the people at the front - the 'core members' – who are working on their own visions, what they think is 'good' music, and you end up just supporting them, trying to help turn those visions into reality.

I’ve always played guitar, and written songs, it’s just that I’ve not had the time to play them to people. It feels amazing to finally be in control of what kind of music I’m making.

What tipped you from drummer to frontman?

Numerous things, namely meeting Freya and spending time in Paris together a couple of years ago. I met a lot of lovely people out here (I’m writing to you from a friend’s house in Fontainebleau) and made some very strong friendships. Lots of very intensely sad things had happened, namely the passing of my friend George. Being away from London gave me clarity and a lust for change that was very much needed. We came home, and within two months Freya and I had moved to Margate. I suppose it was a desire for something different.

Does that feel most natural for you at the moment?

Yes it does, I’m happy. It’s strange because I’ve found myself in a lot of situations that are incredibly familiar; just I’m seeing them from a different perspective.

What’s the biggest thing you’ve learned about making music along the way?

Keep it simple. Deconstruct everything and work out what’s necessary and what’s not. And don’t be afraid to start again.

How do you stay focused on it?

I play every day and have done since I can remember. I start to feel peculiar if I haven’t picked up a guitar for more than 24 hours. Music is my therapy, my release. It would be impossible for me to not be focused on it, it’s everywhere I go and everything that I am.

What’s the thinking behind your new single Gargoyle?

It’s a song that has floated around for a while. It’s basically about seeing strength in people and things that maybe wouldn’t be obvious at first look. It’s an ode to cities, to the intensity and misery that exists within them and to the people who manage to keep going despite it all.

What was it like to hook up with Sean Lennon?

I met Sean at SXSW in 2014 when I was playing drums with Fat Whites. I was pretty distant from the rest of the band by that point, and my hanging out with Sean was seen by them as some kind of narcissistic power move, a bid to try and get my foot on that great big New York social ladder. The modus operandi for most of the band back then was to give a great big ‘fuck you’ to everybody we met.

The truth of it is that we have a mutual friend and we just got on really well. I played the chords to Gargoyle to him at his hotel one night and he came up with some lines for it. He taught me a lot about writing lyrics, how to hone them in and say as much as you can in as few words as possible. We still speak now and then, I told him that Gargoyle was coming out and he’s really happy about it. I’m sure we’ll see each other when I play in New York…

I’m going to record an album. The band and I are going to set up shop in the countryside somewhere and just immerse ourselves in music. It’s very exciting to have the chance to record a whole album of songs in a proper studio. The plan right now is that it’s all going to be done to tape. Apart from that I want to play in as many places as I can and just keep writing songs.

Do you have any words of wisdom for new music-makers?