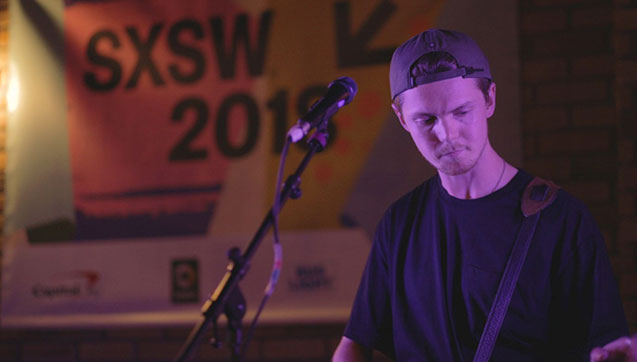 ‘Learning to two-step and doing the Texas sway’: the Welsh singer-songwriter spills the beans on his favourite SXSW moments...

‘Learning to two-step and doing the Texas sway’ were singer-songwriter Dan Bettridge’s standout moments of SXSW 2018 - apart from his knockout live shows that is.

All through last week he beamed his ageless melodies and pared-back production right into the heart of Austin, Texas, leaving his plaintive lyrics to do the talking. It worked a treat, with new US fans and industry offers swiftly secured.

But that should come as no surprise - here in the UK it’s been a similar story for the Welsh troubadour.

Over the last few years he’s picked up support from BBC Radio 2 veteran Whispering Bob Harris and Dermot O’Leary, while on the live circuit, Dan’s already played stages at the Green Man Festival, Truck, Festival No.6 and UTAT at Cadogen Hall.

Now back on home turf following his PRS Foundation-funded SXSW trip, he gives us the skinny on his first Austin adventure…

What’s it like, as an artist, to play SXSW?

You know what, I’ve done a few multi-venue showcase festivals and I had a preconception of SXSW because of that, and because of other peoples’ experiences. I thought it would be a lot more chaotic, band changeovers would be tough, people would be scrambling to keep things on track, but I couldn’t have been more wrong. Everything ran so smoothly, it was a real pleasure to play and all of those working for the festival were super friendly and helpful.

How did your gigs go down?

The gigs went down great! Another reason I had such a great time. The last multi-venue I played I must have sung to a room of about 10 to 15 people. This was only the second time I’d played in the US and the first showcase was a sweet venue with a separate music room and it was full! I couldn’t believe it - there was even a girl who’d flown down from New Jersey to see me play!

The second night was a room with a bar, and when we arrived there wasn’t much going on but right before my set it started filling up which blew my mind! The last showcase was a whole other ball game though, it was what the festival calls a Second Play Stage where they get artists to play an extra set, acoustically, in a hotel lobby. That was understandably loud but still people were coming up afterwards - people listened - which feels especially great when you’ve come from the other side of the world!

Did you get any industry feedback/leads/offers?

Yes, we made some great new friends and connections that I feel like no other festival like this could have offered. It already looks like some opportunities are in the works because of this week, but my lips are sealed...

What was the best band you saw during SXSW?

I think my highlight was a guy called John Craigie. He’s a baby of the golden age of hippies and his songwriting is phenomenal, moving and also very funny. In between each song he’d tell a little story, which were always hilarious, and then would fall into a corresponding song of equal quality. He’s definitely worth checking out, especially live.

Best food experience of the week?

My bacon and potato breakfast omelette from the cafe at the bottom of our street in Barton Springs, without a doubt!

Learning to two-step, do the Texas sway and the Austin handshake with a bunch of Texans on St. Patrick’s Day. Also, my first showcase was really cool.

Why is it good for a UK artist to play at the festival?

I think it’s super important, of course. We live so far away from the States that it makes it hard for any talent that isn’t signed to a label with a nice budget to get out there and show the US what we’ve got going on, and for that I'm very thankful to PRS Foundation and Wales Arts International for supporting my trip. We may have the internet and streaming etc. but nothing is like getting to see someone live, see how they act and react on stage, how they interact as well as how they sound. We’ve got a lot of special artists over in the UK that need to be seen - we all learn from each other - it’s mutually beneficial without a doubt.

Any advice for UK artists thinking about going next year?

Don’t panic about visas, it’s not worth it, but ABSOLUTELY look at them well in advance. Make sure you have every small detail of your trip printed out in case they ask (they probably won’t, but you don’t want to be sent home). Also, have something going on when you go there - new material coming out, a tour coming up, something that people can follow up with and keep in contact about.

Also, this year I made some small cards and stickers from Vista Print with my handle for everything on one side, @danbettridge, and my Spotify scan code to my profile on the back. Get something like this, something small and easy and keep them on you always. EVERYONE is there to discover, it’s a goldmine for networking.