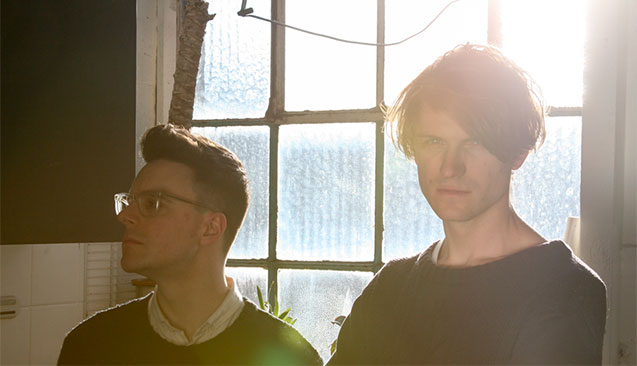 Retro-futurist duo CYMBALS let us in on the making of their brilliant new record, Light In Your Mind...

Retro-futurist duo CYMBALS may excel in tropical electronics, but behind the sunshine synths lies a stoic sadness.

It’s a depth that draws you in, loop by loop, as Jack Cleverly and Dan Simons gently unravel failing relationships, betrayal, addiction and illness before discovering the pure joy of bouncing back.

This is music as therapy, a widescreen amalgam of Balearic overtones, fragmented acoustics and soul-searching lyrics, all brought together under the CYMBALS circular sensibility.

Having undergone various line-ups since their angular 2011 inception, the band have streamlined to its core elements, and the resulting new LP Light In Your Mind sums up just how far they’ve come.

Out this Friday (25 August) via Tough Love Records, it’s all lush songcraft and sundown electronics – the perfect end-of-summer soundtrack. Dan tells us more about it…

What’s the thinking behind your new LP?
One of the big themes is decay - both physical, for example ruined buildings - and personal. Jack's talked about how a number of things in his life were falling apart at the time the songs were being written, but how new knowledge and beauty were revealed amid all that chaos and decay.

What were your main inspirations?
There are lots. Most of my inspirations are musical, although Jack brings inspirations from literature and visual arts too. Arthur Russell is a big influence, for instance on my viola playing. Also people like Gold Panda, and the way he uses these really emotive samples. We're also fans of Blood Orange, who I think helped inspire the 'dancefloor confessional' feel of some of the album.

Where and when was it recorded?
The album was recorded at Total Refreshment Centre in Dalston, in winter 2016/17, with Kristian Robinson. We loved his work with Weird Dreams, and also his own projects Capitol K and Loose Meat.

How did it come together?
Before we went into the studio, we whittled down several albums' worth of demos to the best ones. Jack and I had already written most of the songs before going into the studio, but some were completely transformed through working with Kristian, as well as through the brilliant drumming of Justin Goings and Josh Heffernan. We kept quite a lot of things from the original demos, like vocal and viola samples recorded in my bedroom, as we liked how lo-fi they sounded compared to clean studio recordings.

Did you experience any difficulties when making it or was the process relatively easy for you this time?
There were one or two false starts. In spring 2016, we spent a few days in a barn writing a load of demos that turned out not to be right for the album. Sometimes it's important to try things out to find out what you don't want to sound like, so by the time we got into the studio in the winter, things went pretty smoothly.

How do you think your sound has evolved since The Age of Fracture?
I think there's a warmer, more analogue, maybe even soulful feel to Light in Your Mind, compared to The Age of Fracture, which had more of a synthetic, European techno-influenced sonic palette.

What have you learned about music-making since your first record?
Well, our first album was called Unlearn. We wanted to strip out anything unnecessary from the arrangements and forget all the bad habits we'd picked up. Since then, I think we've learnt a lot about what to put back in. Also, I think we're better at playing our instruments now- I didn't really know how to play in time back then. It was a big day when I found the quantize function in Ableton.

You’ve both played in bands before, how is the CYMBALS dynamic different to that?
That's hard to pin down, partly because the CYMBALS dynamic has changed a lot over the years. We've had a rotating cast of at least 10 different members, each of whom has brought something different at different times. One thing unique to CYMBALS, especially recently, has been the songwriting partnership between Jack and me - most of the songs on the album were written very collaboratively.

What’s keeping you busy for the rest of 2017?
At the moment we're busy preparing for our album launch at Thousand Island in London on 31 August. We also have lots of other exciting plans we'll announce soon.

What’s the most exciting thing happening in electronic music for you right now?
I'm really excited by people like Kaitlyn Aurelia Smith and Loscil who are making electronic music that combines synthetic and organic sounds in really clever and beautiful new ways.