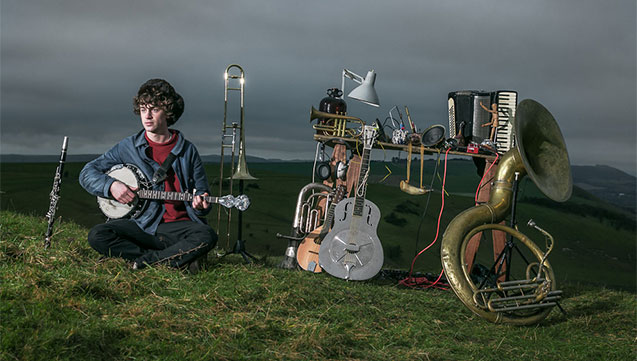 'My inspiration is the funny, peculiar and devastating situation we find ourselves in': experimental composer Cosmo Sheldrake on how our environmental calamity has shaped his ace debut LP...

Over the last few years, he’s worked on a string of strange and wonderful collaborations with soundscape ecologist Bernie Krause, lauded experimental artist/producer Matthew Herbert, the Natural History Museum and the Museum of London.

All of these experiences have fed into his anticipated debut album, The Much Much How How and I, which lands in April. Three years in the making, it was written under the influence of a diverse group of musicians – from The Kinks to Moondog to Herbert – and was shaped by his study of anthropology at university.

A love letter to the natural world, it follows the Tedx talk he gave back in 2013 – Interspecies Collaboration – which included a symphony of natural sounds alongside his own vocal improvisations.

‘For me, found sound and field recording is another kind of storytelling,’ he says. ‘I like the denseness and complexity of it. You’re never capturing just one thing. You’re capturing a whole ecosystem or web of complex relationships, which tell their own stories.’

When we pick his brains to learn more, the PRS Foundation-funded composer talks of 'meaty' textures, collaborations with fish and other strange musical partners, clearly animated by the process of allowing the wild into his work.

Get the skinny from one of the biggest imaginations in music…

How did you first get into using found sound?

I used to have an eight-track recorder and I’d record little things on the piano and loop them up. But music started getting interesting and meaty for me when I began travelling with a portable recorder.

At first, it was almost like journaling - documenting memories or capturing sounds of places or things I encountered. That’s how it began, and from there I started getting more into acoustic ecology. I studied anthropology at uni and through that I encountered ethnomusicology.

Why do these noises appeal to you musically?

For me now, it seems like a kind of storytelling. I like the denseness and complexity of it, particularly on the acoustic ecology side. You’re never capturing one thing, you’re capturing a whole ecosystem or web of complex relationships, which for me they tell their own stories.

Also, these sounds arrive with such texture and character that I’ve always struggled to replicate with synthesis or making soundwaves. For me it’s almost easier. It’s more of a collaboration.

Do you think these sounds make music more involving for the listener?

Yes, I’d like to think they make the music more engaging. I often try to tell the stories of the sounds, particularly when I’m performing live. I explain where they come from and try and invite people into that process. I feel it breaks down a wall.

I have a friend who’s a seamstress, a radical seamstress. She has a policy where she never hides a seam – she always puts them on the outside edge. I really like that approach. I think that making the process visible invites participation from the listeners – an appreciation and understanding about how it’s made. Suddenly, a whole new kind of conversation kicks off.

When using field recordings, do you like to keep it organic or do you go through a lengthy process of snipping and manipulation?

Generally speaking, I’m quite rough and ready with things. I just cut them up and ‘biff baff boff’ kind of thing. I try not to affect them too much but I don’t have any rules or regulations about it.

I remember the time I was trying to turn a fish - a recording of a longhorn sculpin - into a bass (laughs). I had to loop it up. I do use samplers a lot to slow and speed things to alter their pitch, although I generally try to keep things somewhat recognisable.

What’s the thinking behind your new record?

It feels like it very much has evolved of its own accord. It’s not exactly a concept record or something I had the image of in my head before I started making it. It’s a kind of documentation of my process, thinking and influences. It’s taken about three years to put together.

Because I know which order I made the tunes in, I can very much feel the arch of inquiry that moves it along. There are a lot of found sounds and tape recordings in there, but it’s also been mixed a lot. I did a lot of recording of woodwind and brass, so it’s got an orchestral feel to it.

Lyrically, what was inspiring you?

My dad and my brother are both biologists, philosophers and historians of science. That’s what I studied too - anthropology was a lot to do with science and the way that people imagine the natural world to be or the false myths behind how we can project our anthropocentric visions onto the natural world.

A lot of the thinking behind the album is around our relationship with our environment and the funny, peculiar and devastating situation we find ourselves in now. I think I’ve always had an attachment to trying to frame that in a way that doesn’t feel alienating or is never so overt.

I hope it feels somewhat optimistic, playful and celebratory, as well as engaging with some of these themes.

How did you come to work with Herbert on the record?

I first got in touch with him when I was working with Bernie Krause, who’s a soundscape ecologist and tape recordist. I’d been making music out of recordings of fish and came across Bernie, who’s been recording for over 50 years. Over 50 percent of his sound archives are of now endangered or extinct environments or species. This really struck me.

I’m really interested in the idea of extinction and extinct sounds and I’d been trying to make a project entirely out of extinct animal sounds. Then I was commissioned to work on the music and perform at an event for the Natural History Museum. I got in touch with Bernie Krause to use some of his sounds of coral reef environments and fish.

Originally, I got in touch with Herbert around that project. We started talking. I was just beginning to make the record and started sending him things. It was really helpful to have another pair of ears. Then I decided to mix it with him and he mentored me through the process.

What did you learn from him?

He knows what he wants in a really clear way, which is not how I work at all. I’m completely the opposite a lot of the time. I generally discover what I want when I finish something.

Herbert’s a huge audiophile, he’s obsessed with sound, and the quality of it in a way I’ve never been. My recordings aren’t necessarily good quality but I just use them anyway. I think working with Herbert has deepened my relationship with sound and the extent that my ears can listen to the full spectrum.

Also, I really respect his approach. He commits and engages with every decision – he’s got a very particular way of working. I can’t put my finger on all of it, I think the experience is still percolating through.

Do you have any tips for artists who haven’t used found sounds before?

Just try it! They can bring such a world of texture. They thicken things out so much and make them more fleshy, somehow.

Often I find myself sitting in my studio thinking, ‘What now?’ If it’s just me with instruments, or a synth, I find it hard to start things. So I rifle at random through my archive of recordings. Then I chop them up, put them into a sampler and just start playing and finding rhythms.

Do you think your interest in found sound has opened doors for you into other areas of work?

Yes, absolutely. Working with Matthew Herbert, collaborating with Bernie Krause or the project with the Museum of London have all come my way through it. I think it’s an area where the overlaps between music and sound and science is a really interesting place to explore and tap.

Cosmo Sheldrake's debut album The Much Much How How and I is out on 6 April.

We spoke to Cosmo for our Found Sound feature in the current issue of M magazine.