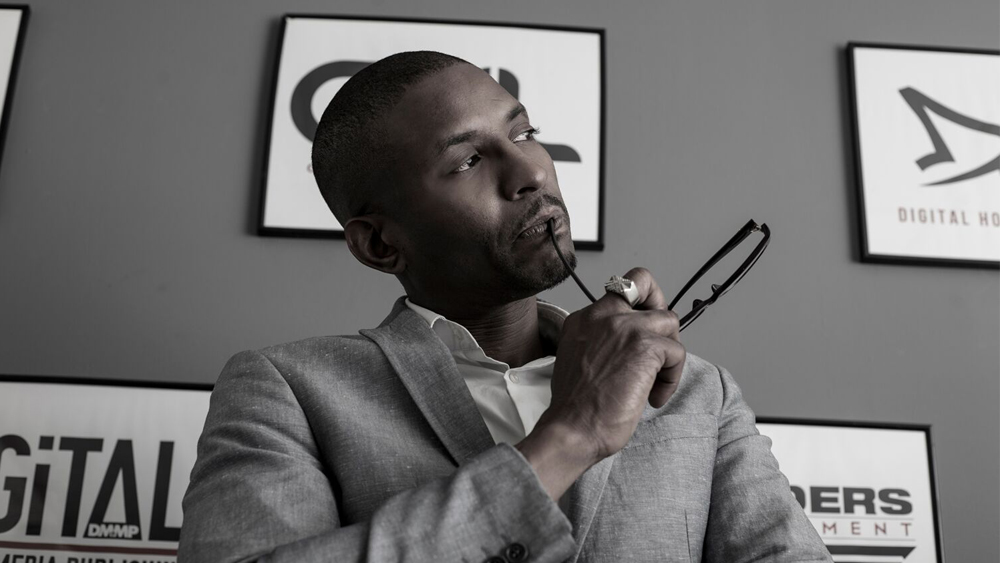 ‘We need creative hubs and spaces like this where not just musicians, but photographers, videographers, vloggers, influencers, have a creative space that they can access and the industry supports,’ says Corey Johnson.

‘We need creative hubs and spaces like this where not just musicians, but photographers, videographers, vloggers, influencers, have a creative space that they can access and the industry supports,’ says Corey Johnson.

Corey is the founder of Defenders Entertainment, a label incorporating the onsite audio and visual studio Digital Holdings based in South London.

The label is preparing to celebrate 15 years of supporting young artists careers, which has included Jessie J, Tinie Tempah and Chip.

The label achieved international success with the licensing of Crazy Cousins & Kyla’s single Do You Mind, which was picked up for Drake’s hit One Dance.

Alongside his work with Defenders Entertainment Corey has been heavily involved in charity work.

Prior to his label and charity work, Corey began his music career at just 10 years old in the group New Frontier.

The band were signed to Universal, embarked on a national tour and made several TV appearances, including Timmy Mallet’s Mallets Mallet.

Next up Corey is set to launch his own online media platform Out There TV (OTTV), specifically young people to gain experience of the media world.

Here we chat to Corey about how music can benefit communities, his advice for emerging artists and more…

What that original inspiration was for the studio and the label?

I started just by default. I just started referring artists to campaigns, like Love Music Hate Racism. I didn't have structure. We were just trying to always help young talent. I then started looking after Lady Fury, looking after the boys from N.A.S.T.Y Crew. Our first American deal was UK Rap and that opened up a lot of international doors.

I met Jenny Francis and she then really started to school and teach me on the business and introduce me to people. I started to think, "okay, well I need to have a bit more of a structure." Then I had this grand idea I would build an online platform to rival iTunes because I heard there was no other platform other than iTunes.

I was tying up videos just to put on my platform and then the next thing I know, before anything has turned around, they're literally there, my one production company. Basically, everybody from Saxon Sound to Vanessa from The Saturdays, were all at the studio with this production team which was run by this genius called Richard Bowman. The smartest man I've ever met in my life literally. He's Scottish.

How do you think music can benefit communities?

Where there hasn't been a consistent approach, we were like, "we don't have the solutions for everything, but we have the solutions towards what the creatives need." Because to access resources and work experience and work placements is one part but then the ability to know how to then self-publish, self-distribute as well as make money from transferable creative skills.

That's what they're needing to harness a bit more because for the UK, creativity is our biggest export. There is not much that we can manufacturer that the rest of the world can't make much quicker and cheaper.

We need creative hubs and spaces like this where not just musicians, but photographers, videographers, vloggers, influencers, have a creative space that they can access and the industry supports.

Not everybody is going to be the player on the pitch, but they need to be aware of the jobs around the stadium and around the team. That's the same with entertainment. Not everyone is going to be famous because really and the artist is the last person to be paid. At the same time, the jobs and the skill sets in and around entertainment, those are not being profiled enough. We're not seeing enough of those people and what they've achieved and stuff.

With your producer hat on, what do you look for in young talent?

Most of all the talent has to be different. It's like baking a cake. I think that there is patience, hunger, consistency, likeability of their character but overall that difference makes them stand out. It's just being different.

What's your take on the UK's current urban music scene?

I think music is evolving, and it’s heading towards it being really good music. I think that it's very exciting. It needs to be supported and invested in because for what it's then actually turning around online and what it’s accumulating across streams, across royalties, there is not a reflection to what is being developed.

The money that was put into rock when it was at its heyday, in comparison to what's now being put into either drill or rap or grime, if you look at the indie acts, they're not doing a fraction of the streams or views that these acts are doing.

We're not seeing a fraction of the support or investment. It's quite sad to see something so fruitful only for a lot of energy and marketing going into demonising rather than to regulating or supporting it.

What would your advice be to emerging artists?

First of all, always handle your business. That's valuable. It should be first and foremost in your mind to join PPL, PRS and MCPS, because that’s how you earn money when your music is streamed, among other things. But it's often not explained like that.

I think it’s good to ask questions. I used to sit on the phone in the PRS reception. I'm from Streatham so it was walking distance. I’d go and ask things over and over just to get it in my head clear. Really, I say it all the time, it's not stupid to ask questions, it's stupid to assume.

Of all of the music projects you've done to date, what are you most proud of?

I think the Defenders, me as a publisher and as a writer, that's also what I'm most proud of.

What do you hope to achieve with your Community Youth London charity?

Be the McDonald's of the music business.

The Save London campaign. We're calling upon the entertainment industry, the media and the community to invest their time and their money into young people having something to do. It's actually a supportive solution.

Now we're looking at launching the OTTV alternative platform, which I'm hoping for Google, YouTube and different media and music platforms will get fully behind, because we are the source year on year for young people.