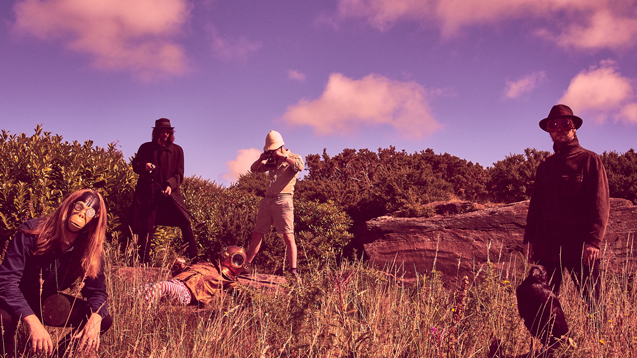 Liverpool’s The Coral have always been a band dancing to their own tune outside the mainstream while still managing to enjoy serious mainstream success.

In the Morning, Don’t Think You’re The First and Dreaming Of You are three of their biggest hits, incorporating elements of bleary eyed psyche, Mersey beat, Russian polka and even krautrock into their musical patchwork.

The Coral’s album Distance Inbetween, their first in five years, sees the group back in fine form, veering into more groove and riff-based pastures. Songwriting chief James Skelly has spent inbetween times working in the studio with She Drew The Gun and Blossoms and running his Skeleton Key label. We quizzed him on the band’s new record and how the city of Liverpool has helped shape his songwriting skills…

Who inspired you to start writing music?


Probably Noel Gallagher. I was only like 13 or 14. I think I heard Wonderwall on the radio when I was at school. But I was into dance music before that. I always liked Bob Marley before anyone. The Beatles. The Doors.

Was it an easy thing to go from being a fan to a songwriter?

I wanted to be in a band and get out from where I was from and songwriting was a vehicle for it. I got more into it as I went along. At the beginning it was all about escaping. It wasn’t about getting a message across. At the start I wanted to just get something up and running, to do something.

Are there many other artists from the Wirral itself?


Not really - maybe OMD, but I wasn’t really into them as a kid. I didn’t like that type of thing. There wasn’t really anyone to look to in that way. So instead, you’d look to Liverpool. You could stand on the beach and see Liverpool 15 minutes away. Wales half an hour away in the other direction. We took from Shack, the Bunnymen and the La’s. Then the Super Furry Animals and Gorky’s from the other side, the eccentricity of them all and put it in the pot. From the Beatles and Liverpool to the Welsh thing, they’re all outsiders. We could see both places from where we lived and it was a real meshing together of those things as a band.

How has the creative process evolved and changed as you’ve got older as a group?

It was kind of easier for this album. It was quite easy this one in a way. There were no politics, no one in the group having a bad one. In a way it was the most functioning band since the first album. With both this and the first, we were two functioning bands pulling in the same direction. With all the others, there was turmoil but in a way you get some of your best music from that.

Was it a deliberate thing to come back with a different sound?


Yeah we wanted it to be more minimal and direct. There aren’t many chords. I think there are only about five on the whole album. It took a while to get the tunes together but we had them down in two to three takes. Once we’d done that, it took a bit longer to work out the sound. If you’ve got to be groove-based but you don’t have an interesting drum sound, then it’s not going to really stand up. We had to have this interesting rhythmical sound.

Were there any artists you were looking to inform that?

Yeah some of the early Cypress Hill stuff, Kool Keith, some Portishead, that sort of sound but with early Can, some krautrock thrown in. A lot of it was from our own tape recordings we used to make on Tascam recorders. We loved the sound of it but how do you make it? We were inspired a lot by that.

What have you learned from the industry?

Mostly, what not to do. If I usually do the opposite of what I would have done, then it would have probably turned out better.

Does it feel like a very different musical world to the one you entered?

Yeah in a way. It feels like alternative music has thrived in it. There seems to be a more of a voice but pop music has suffered. It’s a bit like CGI, everyone has the same people. It looks great, sounds great, you don’t often hear a bad sounding record. But then everyone’s record sounds the same. You’d rather hear something bad sounding for a bit of character. People have become too reliant on it. Why don’t you take a plug in and put it on some fucked up out of time tape machine, so then it’s a moment, a moment in time that you can’t re-create, as tape moves differently every time if it’s a broken machine. Each time will be different so no one else will have that moment.

Liverpool’s music scene - is there a certain mentality that unites artists from the city?

People in Liverpool seem to be able to sing and harmonise really well. Even if they aren’t that good, they’ll be harmonising perfectly. It’s different for us as we’re from just outside Liverpool. So we could take something from it.

It’s quite hard for young up and coming bands from Liverpool, in the shadow of the past acts like the La's. They’re quite a negative thing. It’s not really what music is about. A lot of Liverpool bands are in the shadow of what’s gone before and they almost have to rebel against that to do something really good. Even though it is great, new acts need to discard that past. Take the bits that work, and discard the rest, hold it in disdain, to change it. Even if you like it, to go against the grain you might almost have to discard it. It’s different for bands from the Wirral, that shadow isn’t really over them. You can see with She Drew The Gun, she’s taken from the Liverpool thing but she’s taken it somewhere else. It’s still lo-fi, interesting sounding, outside of the system. But it’s not parochial.

Are there plenty of opportunities for new acts?

Which new artists are you excited by?

Have you got any tips for new and emerging artists?

You’ve got to have tunnel vision in a way. There’s a fine line between delusion and belief and if you can surf that, then you might be all right. That’s where I live anyway.

Distance Inbetween is out now.

Watch the video to recent single Holy Revelation below.