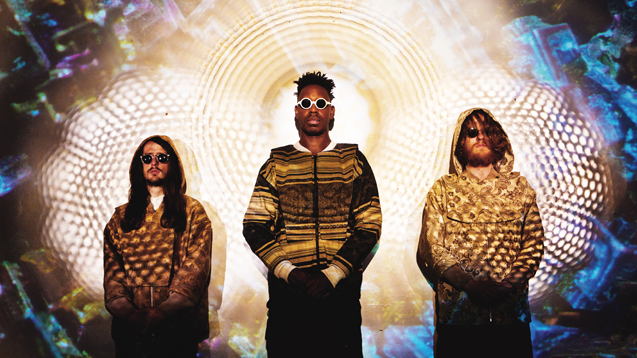 The Comet Is Coming

‘We attack the music using our instruments as weapons’ - we open up our minds and let kings of psych-jazz, The Comet is Coming, in…

Psychedelia, jazz, afrobeat, electronica and sci-fi all make up the colourful musical collages sewn together by new trio The Comet is Coming.

The group have just unveiled their debut LP Channel The Spirits on the bastion of eclectic sounds, the Leaf Label, to no little critical acclaim.

Inspired as much by their love for outer space as the free jazz thinking of cosmic guru Sun-Ra it’s one of the most out-there releases of the year so far, but all under-pinned by a love for a weird heavy groove and a sense of humour.

How did the Comet is Coming first get together?

Me and Danalogue the Conqueror play as a psychedelic electro synths and live drums duo called Soccer96. We began to notice a tall shadowy figure present at some of our gigs. At some point he appeared at the side of the stage with his sax in hand. When he got up on stage to play with us it created an explosive shockwave of energy that stunned us all. A couple of weeks later King Shabaka rang me up and said ‘hey let’s make a record’ so we booked three days in Total Refreshment Centre studios. It all came together at an incredible speed. We played and recorded to 1/4 tape with no pre-written material. By the end of three days we had recorded hours of music.

We focus on space, the future, destruction, spirituality, mental instinct and human power. I think through imagining a totally new world it frees up the creativity to explore. Children have immense powers of imagination whereby they transport the whole environment into any time and place they wish. I think that by mind traveling through inter-dimensional space voyages we can unlock ideas unknown to ourselves, but at the same time recognise familiar points of cultural reference.

Creation and destruction are often the same process but viewed in the opposite way. When man cooks food, they use tools of destructive force: fire, blades, prongs and potato mashers. In the creative process we often slice the rule book and destroy conventions. We attack the music in a battle using our instruments as weapons. Distortion, saturation, bleeding tapes, side chain compression and lazer sounds etc.

With this approach in mind, we either come up with an idea and record it straight away, or we push record and then come up with the idea, so that we capture the actual creative process of the idea’s birth. Obviously this means we often have to go in and edit after. But by making music in this way there is always a natural freshness as well as a sense of journey.

Channel The Spirits is your debut LP - what was the aim with the record?

Channel The Spirits was meant to be a soundtrack to planet Earth’s doom. To stare death in the face and explore a symphony of human emotions. Panic, hope, defiance, fear, brotherhood and a release from cultural restrictions. We hoped to discover the underlying human power beneath the mundane day-to-day routines of modern life.

Through the process of making the record we have been on a journey together through the distant realms of our collective mind. It feels like we have become creative space explorers. 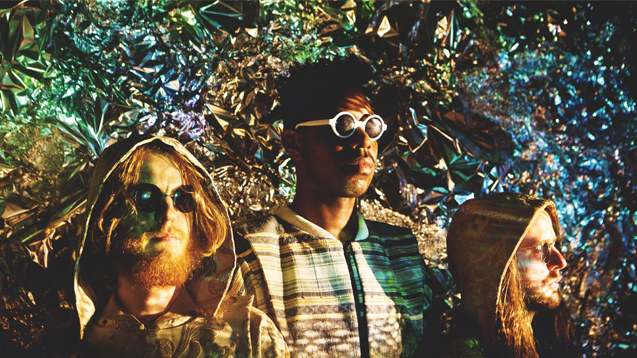 A lot of the imagery surrounding the band explores outer space, b-movies and sci-fi worlds - what is it about these that holds appeal for the group?

Outer space is basically unknown to humans. Everything we can see or understand only makes up five percent of the universe. Space is a blank canvas for an artist to express totally new forms. It’s a mystery that we can unravel with our wit and imagination. Our minds become open when in space, we see how small we humans are. Space is difficult, unnatural and unwelcoming but we seem to be predestined to explore it. Space holds the secrets to our science but also to our culture. We come from space, and when confronted with its sheer size and mystery we may finally find a collective feeling that could bring humans together. Science fiction is probably the most political of all drama because it forces our minds to recreate the world we live in. It’s no coincidence that one of the first black women on TV to have an ‘equal' role was Nichelle Nichols from Star Trek. Star Trek was the only TV show Martin Luther King would allow his children to watch.

Which artists are you currently enjoying/loving?

I’ve been enjoying the new United Vibrations album. We did a show together in Paris and it was great, There seems to be synergy with our bands that can’t really be described.

Planetary destruction. But before that we will carry on the exponential curve of human discovery, where we will command huge powers of genetic technology to create a super form of intelligence that can understand things for us. All understanding will be centralised into a mass mind hybrid of technology and biology. We will become subservient beings of limited mental capacity. All further discoveries of the intellect and metaphysics will be unimaginable to us. The great super intelligent organism will then either attempt to prolong its existence, or decide to eventually release itself from its own awakening in an act of spiritual assimilation into the cosmic energy field. Becoming one with all creation.

Have you any advice for new and aspiring musicians/songwriters?

The most important thing and something that is never taught … music happens in the brain, it is a part of your mind and is essentially a complete mystery to all. Only you know how the music feels, and how it feels is what makes it music. Music is your feeling, feeling is the most important thing going on in your life and should be regarded with absolute authority when making a decision. The closer you can observe this feeling the more it will lead you, it’s the reason why you are reading this in the first place. However the feeling of music is easily overlooked, as you try to imagine how others people feel. There are a lot of ego minefields to cross. If you view ones-self from outside in, you might miss what’s inside out.

Channel The Spirits is out now. Watch the video to Space Carnival below.