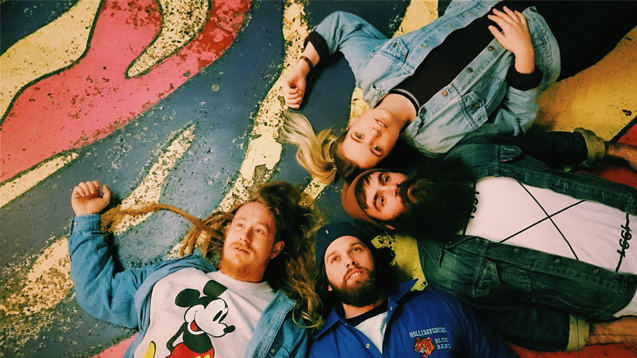 For many groups, moving to London can be a big step in their career, a decision that can make them.

But for Liverpool four piece, Clean Cut Kid (Mike Halls, Evelyn Halls, Saul Godman and Ross Higginson), staying put in the city of their origin has made them the band they are today.

Able to take advantage of Liverpool’s combination of vibrant scene and cheap rents has helped the group grow and develop organically without needing to rush into anything. While they’ve gradually unveiled their music, the exuberant fizz and pop of Vitamin C and Runaway have industry folk and fans crying out to hear more.

Now following key performances at festivals including Glastonbury and SXSW (courtesy of the PRS for Music Foundation and BBC Introducing) Clean Cut Kid are gearing up to release their much anticipated debut album. We caught up with Evelyn for the low down on the record, the band’s roots and how they would have been a very different outfit if they succumbed to London's siren’s call...

Personally it was always a thing.  I remember my mum saying she had school report cards saying, ‘she just won’t stop singing, make her stop singing’.

I always remember, through primary school, any new friend I made we’d make a band or a girl group. The first time I actually realised that music was a job that you could do was when I saw Britney Spears on TV. Then it went quite quickly to bands, groups like Ash.

At what point did you start writing your own music?

When I turned about 14 or 15 I started getting bands together. That was when I started writing songs that made me feel something, and really started writing about how I was feeling or things that had happened. It was then that I got the real urge.

Clean Cut Kid started from me and Mike being set up on a date. He’d been writing for this guy working on this project, and he was coming down to London to do a few gigs. I just got booked to do backing vocals for him. We got set up, then we started going out. It was just really quick and natural that we started making music together.

As soon as we sang together there was a real … I guess it sounds a bit cheesy but there was real chemistry, and the tones of our voices just sat well together.

When we got Saul and started all playing together as a proper little band we were like, 'this might have legs'. So we got in and recorded Vitamin C and Runaway, then a couple of months after that Ross came on board.

Have you been surprised by the reaction to the music and the way things have taken off?

We had this hope that people would get it, but we just weren’t sure, because it’s quite different. So it’s such a great feeling that people are actually into it.

We just can’t believe it each time. We got signed on our second gig, and up until then we’d just been playing by ourselves in our room. I think the only person who’d seen us play was Saul’s mum; he’d invited her in. We played a gig to her, she was like, 'that’s great'. It was like, 'well if Saul’s mum likes it…'

We quite quickly got the album together and we’re just working on the additional production and mixing, and also maybe a couple more songs might get written in the time now. Mike is writing away and we’re doing demos and stuff. It’s kind of there though. We don’t want to wait around. We’ve got so much material; we’ve pretty much got the next three albums written and we’re just so excited to get on with it.

Polydor, our label, are really good. They will just ask us to sign off everything, even if it takes a bit longer to get an answer, they’re really good to let us stay true to what it is.

How do you think emerging from the Liverpool scene has shaped Clean Cut Kid?

Liverpool gave us a chance to be a band, because it was so cheap to rent out a rehearsal room, and for our rent, that we could do these tiny little jobs, a bit of session work, a bit of teaching, but still have time to be in the band. It’s also such a cool, fun city. It’s a boss city and it was really cheap to live, so that was another thing.

Then the actual support that the companies in Liverpool have, especially from the Arts Council in Liverpool, the Merseyside Arts Council, that was another thing. They gave us funding and time to go into the studio, which is where we made Vitamin C and Runaway. If it wasn’t for that we wouldn’t have had a chance.

Is there a Liverpool sound?

In the last couple of years there have been so many different types of bands coming out, there just seems to be space for everyone. When you’re in a city the other bands and sounds do rub off on you, but because it’s so diverse I think everyone just feels free enough to just do what they want.

We toyed with the idea of moving down to London when we were first signed, purely because we thought we’d need to be there so much, but then we were just like, ‘No, no. We’re so happy in Liverpool’. It’s got this feel about it where I just don’t think Clean Cut Kid would have emerged how it has if we hadn’t been immersed in the city.

Now, when I think back it’s funny that that is even a thought that crosses my mind. Because what is more important: you having the space and the time and being inspired to create music and create art, or meeting some businessmen and some industry people?

I know that they come hand in hand, at some point you need both, but at the start it’s much more important to actually be able to make art and make music and practice your craft.

Have you any advice for new bands?

We're featuring and profiling a number of Liverpool acts and artists - check out the next wave of artists from the city making a name for themselves.