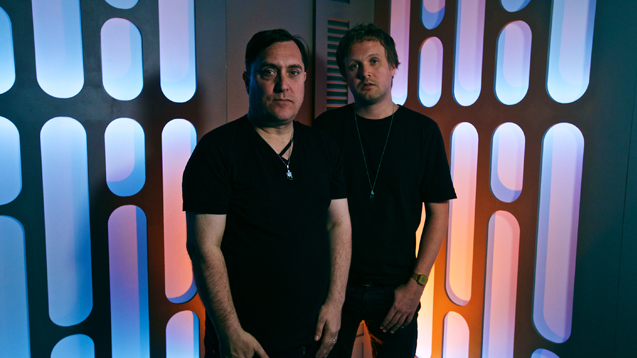 We meet Circle Sky, the new outfit from Beyond The Wizard Sleeve’s Richard Norris and Martin Dubka and the best live electronic act you’ve yet to hear…

As electronic artists, both Richard Norris and Martin Dubka are heavyweights in their own right.

So the announcement of their coming together as Circle Sky in 2016 has done plenty to stir up excitement with analogue and dance music heads.

Why? Well the reputations of both are difficult to beat - Richard is well known for his synth pairings, both as one half of the The Grid and Beyond the Wizard’s Sleeve with Erol Alkan. Martin has been using his machines to cause much nocturnal dissonance in East London, spotted both as a solo artist and performing with Rory Philips’ new Mixed Fortunes outfit.

Last summer 2015 Richard started a residency at Secret Cinema's vast Star Wars production, which ran from May until October in a series of massive warehouses in London's Docklands. Over 100,000 people witnessed the production with Richard performing 50 live shows on the Death Star as part of the run. For the last weeks, he hooked up with Martin to start their new Circle Sky project aided by a generous loan from Moog. They’ve now got more than 30 tracks recorded and are gearing up for their first gig this Thursday (28 January) as part of the M magazine showcase at the Sebright Arms. We took some time out to meet your new favourite electronic act…

What inspired you to start making music together?

Richard (R): We met when Martin was booked to play at my Throne Of Blood night at the Ace Hotel in London. I was looking for live electronic performers for the night and Martin was recommended. I was inspired to make music with him because he brought a suitcase of strange synths with wires hanging out of it that looked like a bomb.

How do you two approach the creative process? Is everything improvised? Or do you have a musical map in place before you set off?

R: It depends. Sometimes it's an atmosphere, sometimes a sequence, sometimes a song title. Usually it's an electronic sound. We try to bring a live element to everything we do. Mainly by not relying on computers too much, and by standing up and hitting things.

Martin (M): Limitations are always a good starting point. Time, ability, number of patch cables. The universe will take care of the rest.

You hooked up over last summer as part of the Secret Cinema Star Wars season - how important was the influence of working inside the Death Star to your music?

R: We were recording all day, using the Moog System 55 modular, then played gigs at night, six nights a week. It was great that it was undercover too as we could experiment without too much pressure.

M: The atmosphere was quite sober but surreal. Maybe even intimidating. And it was always dark. It definitely affected our mood.

You’ve got more than 30 tracks recorded - what sort of electronic styles do they incorporate? And when should we expect to be able to get our hands/ears on them?

R: Melody and hypnosis. A bit of acid. We're putting out a limited 12" vinyl release in March, with two 10 minute tracks on it.

M: I’m not saying they’re especially NOT any style of music but I’m not able to tell you what it is. There’s definitely a common theme of hypnosis or perception.

Which artists do you look to for inspiration?

M: I find ideas more inspirational than sounds. I love visual artists that seduce you with their ideas and then when you see what they’re talking about, it’s rubbish. Then that gives you the idea to execute it in a different medium and in a more interesting way.

R: Probably the Buckla Music Easel. I haven't got one as they are the price of a small car and are notoriously unreliable, but they sound amazing.

M: Delay is good. And filter.

You have yet to play a live show - what should the uninitiated expect from your gigs?  No two shows are going to be the same?

R: We have a starting point for a lot of the tracks, some sequences and rhythms … but they can morph into improvisation at any point … we know where we'll start, who knows where we'll finish. Keeps us on our toes.

M: Perhaps best if they come without expectations.

What else does the future have up its sleeve for Circle Sky?

R: We are planning to score a film, and perform an endless installation based on the frequency 111Hz. We'll also be playing at clubs and festivals. There will be further releases later in the year, and remixes for other artists.

M: Just watch for the signs.

Visit the Circle Sky Facebook page for more information. Listen to a preview of their track Reveal below...

Get your tickets for Circle Sky's debut gig.