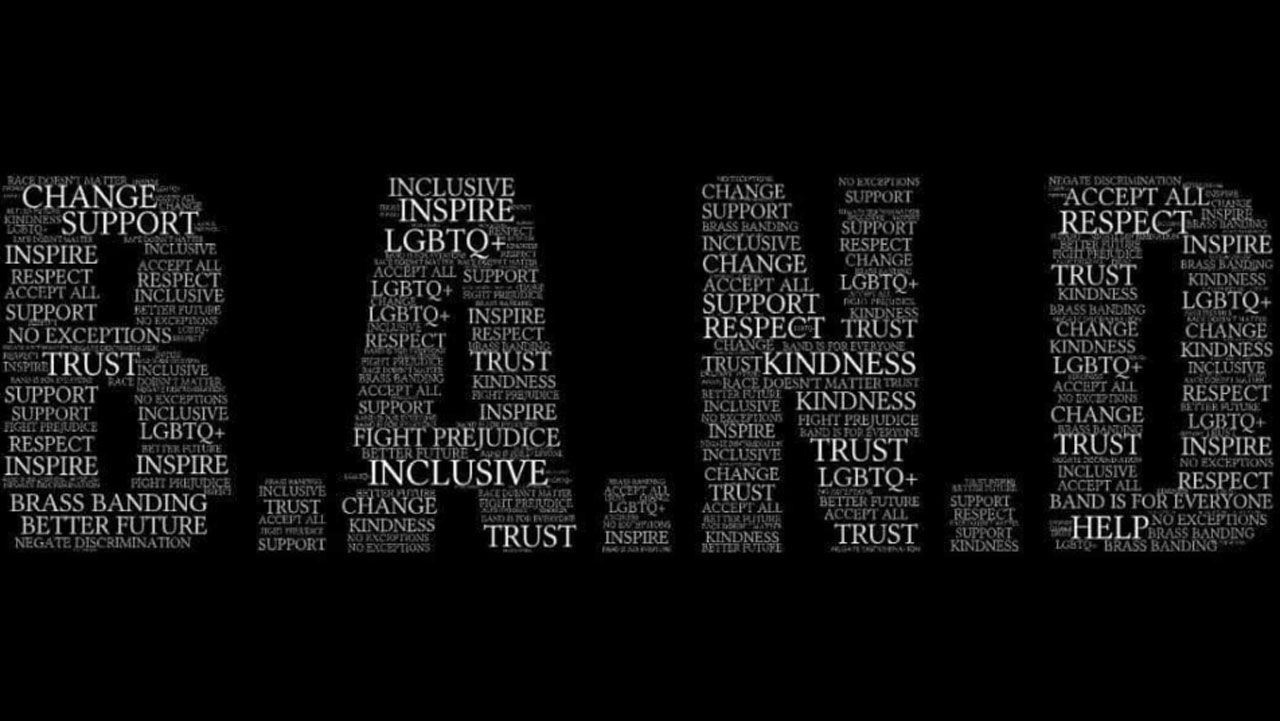 'Bands are also supposed to be a reflection of the communities in which they stand, this simply isn't the case. Representation of different ethnicities, cultures and backgrounds is practically non-existent.'

Reportedly, masses of people in the Brass Band movement have witnessed something or had something happen to them, which wouldn't be acceptable outside of their own institution. From racism to sexism and homophobia, there are deep seated issues within the banding community that are now being called out.

B.A.N.D – Bandspeople’s Alliance to Negate Discrimination – is a newly formed organisation set up to eliminate discrimination of any kind from the Brass Band movement. B.A.N.D exists to promote inclusivity, encourage diversity and support bandspeople.

We spoke to co-founder Chris Hardy about the issue of discrimination within the Brass Band community and how B.A.N.D aims to defeat it.

Hi Chris, thanks for taking the time to chat to M. Where are you speaking to us from?

Hi Maya, not a problem! Thank you for getting in touch. I am currently speaking to you from Bolton. I have lived in a number of places, most recently in Copenhagen where I performed professionally, but now I'm back in the UK and looking forward to continuing to perform again, once lockdown is over of course! Bolton is my hometown, and it's where my passion for the Brass Band culture began.

Can you tell us a bit about your background and the role you play within the UK Brass Band movement?

I am currently a professional tuba player, performing with leading ensembles across the globe, but I began playing at the age of nine. I started up with the Bolton Music Service and worked my way up through their different ensembles, eventually moving on to become a member of the National Youth Brass Band of Great Britain where I held the position of Principal BBb Tuba under the baton of the great Bramwell Tovey.

I then joined my first ‘adult’ band at the age of 14, which was the well-known Wingates Band. After a few years there, I moved on to play with the world renowned Fairey Band. I studied at the RNCM and after almost eight years at Faireys (as they're colloquially known), I decided it was time to focus on a professional career as a musician.

I still have a huge passion for Brass Bands, and perform with many different bands still, on a regular basis.

What is B.A.N.D and why did you decided to launch it?

Myself and my colleagues Lee Dunkley and Ian Brownbill decided to set up B.A.N.D as a group in the hope that we could make a difference in the Brass Band movement, by trying to eliminate discrimination of any kind from within the institution.

Since we started a little over one month ago, we have expanded our steering group to nine members, we are now formalising into an official organisation, and through the help of the leading leisure-time music advice company Making Music, we will soon be a Registered Charity.

'Bands are also supposed to be a reflection of the communities in which they stand, this simply isn't the case.  Representation of different ethnicities, cultures and backgrounds is practically non-existent.'

We have the support of many leading musicians, organisations and ensembles from across the world, and even a number of celebrities. We hope that by standing together, united behind a single purpose, we can make real and lasting changes in the movement we love.

We are also applying for funding from Arts Council England and a number of other places, so that we may serve all within the movement to the best of our ability. We will continue to be a constant source of positivity and support for the movement as well as offering advice, in many different ways.

Some may be surprised to hear that discrimination and intolerance is an issue within the UK Brass Band movement. Can you tell us more about that and where it comes from?

Discrimination of many different kinds sadly still exists in most areas of society, but its existence within the Brass Band culture is something we felt we could really help change, given our collective expertise.

Brass Bands have a long and rich history, one which is filled with joy and wonderful music making and has done so for close to 200 years. It is a truly beautiful thing and is something that is enjoyed by many. However, it is an institution that has scarcely changed throughout its existence; from its origins as a male only form of community entertainment in industrial working class areas, until the present day. Until embarrassingly recently, Brass Bands were still male only ensembles. In fact, a number of leading bands only began including female players in the last decade. It is, however, still predominantly a white, male dominated culture.

Bands are also supposed to be a reflection of the communities in which they stand, this simply isn't the case. Representation of different ethnicities, cultures and backgrounds is practically non-existent.

Band rehearsal rooms are often a hive of bigoted views and discriminatory behaviour, yet due to a semi gang-like attitude, anyone seen to be standing up against it is often treated with startling brutality. We want to see an end to all of this and become a place where nothing but amazing music and positivity is shared in the band room.

Brass bands strive to be taken seriously, as a major player within the wider musical community; however, this can't happen unless we begin to take ourselves seriously. We must become a place where everyone feels safe, welcome, included and where there is no fear of discrimination, sexism, homophobia, transphobia, hate speech etc.

'Most of us in the movement have seen or heard something that shouldn't be accepted, yet it still is. This is why we must fight.'

You recently wrote an open letter inviting people and organisations to support the mission. What was the response to that like?

The response to our open letter has been mind blowing really. In just over one month, we now have over 700 signatures on the document. This number is growing every day, and it has been a real eye-opening experience to see so many people, from all walks of life, get behind us and show their support.

The kindness being shown is something we can't begin to thank people enough for. We would love even more support however, so we can be in an even stronger position to make a real difference.

Has the response to your campaign been entirely positive or have you experienced any unexpected push-back? If so, how do you deal with that?

In general, the response has been very positive. There is however quite a large proportion of Brass Band musicians that believe there is nothing wrong with the movement, and that it should be left alone. This is something we just can't do. Without change, we fear that the Brass Band culture will soon fade away and be nothing more than a fond memory.

There is also a large number of people that say: ‘I haven't seen anything in my band!’ It's an interesting comment, however just because someone hasn't seen it, doesn't mean the issues don't exist, nor does showing your support mean that you are complicit in the negative behaviour. Most of us in the movement have seen or heard something that shouldn't be accepted, yet it still is. This is why we must fight.

'We hope people will become individually responsible for what happens in their bands, if you see something, say something. If you need advice, come to us.'

How can people engage with B.A.N.D?

We are on several social media platforms, including Facebook, Twitter and Instagram. We post regularly on all three and keep all our supporters up to date with everything that is going on. We soon hope to have an advice service available as part of our organisation, where people within Brass Band movement can contact us, in confidence and seek support on any issues they have experienced. We will be a safe haven for anyone that requires it, a place where we will listen and offer guidance. Our team will all be trained, be DBS checked, and be willing to listen to everyone.

What can members of the banding community do to ensure they’re promoting diversity in their everyday lives?

That's a tricky question, as right now we are still unable to perform due to COVID-19, but I would say that education is key. Gaining a better understanding of certain topics so that there is always a level of empathy would certainly be a start. Other than that, we hope people will become individually responsible for what happens in their bands, if you see something, say something. If you need advice, come to us.

'We want to put an end to discrimination of any kind within the Brass Band movement.We want people to feel supported, heard, and like someone has their back, we will be that support.'

Bands also need to be responsible for what their members post on social media. We have seen some shocking posts that have been written and shared by members of our own community, Bands need to react to these and understand that their players are representatives of the band itself. We all need to pull together and stomp out discrimination and ensure a better future for the youth of our movement. Many people see these micro-aggressions, passing comments and jokes as ‘banter’, however for something to be considered as banter, it needs to be funny.

What are your key goals for B.A.N.D and how will you measure success?

We want to make sure the institution has a future. We want people to see Bands as welcoming, inclusive and diverse places to share music with each other. We want children from all backgrounds to feel comfortable enough to move on from youth bands into adult bands. We want to see more funding for music in education. We want to put an end to discrimination of any kind within the Brass Band movement. We want people to feel supported, heard, and like someone has their back, we will be that support.

Our measure for success is a constantly changing yard stick. When we see true diversity and inclusion, I think we'll be happy. But until then, we will keep fighting.