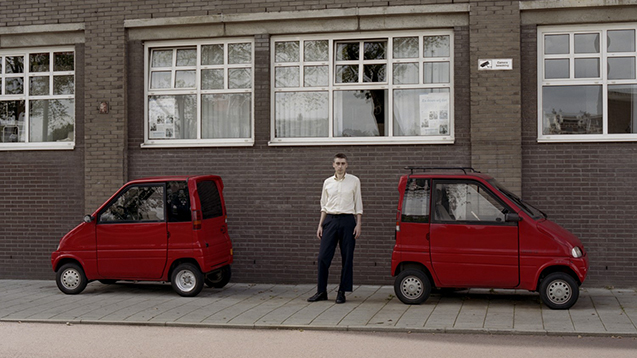 'Amsterdam was the first spontaneous adventure I had when I was a teenager so it’s always evoked something in me' - Charles Howl on recording in the Dutch capital.

'I think people get trapped in scenes and comfort bubbles, especially in London. Amsterdam was the first spontaneous adventure I had when I was a teenager so it’s always evoked something in me.'

Charles Howl is talking about his decision to sublet his room in London for a month and travel to Amsterdam to record his sophomore album, My Idol Family.

Trading in the 'rat race' for the Dutch capital's 'laidback lifestyle', The Proper Ornaments bassist liberated himself from the psych revival mould ('I wanted to draw a line under any pysch association with this album') and introduced strings and lush orchestration into the spaces created by his new minimal approach.

The resulting sound of My Idol Family – his second offering since 2015's debut Sir Vices – is packed with flavours. Taking in laidback guitars, off-kilter organ melodies and a pop sensibility, there's a new-found confidence found in Charles' upfront vocals, underpinned by his signature dry wit. Just check out the star of his latest video, below, for evidence of that brilliant humour.

Now on tour across the UK with a string quartet (dates below), we caught up for a chat about the album and what led him into music...

How did the new album take shape?

The album was recorded in November 2015. I went away for a month with no songs written, only a hard drive of short ideas or sketches recorded on my phone or Garageband. No lyrics came away with me. The only idea I had in mind is I knew I didn’t want to hide behind anything with this album - I didn’t want the vocals sent back in the mix, I didn’t want a haze of effects and more than anything I wanted to prove to myself I could write songs.

The themes that arose in the lyrics must have been a product of the situation I had made by going away. I think you subconsciously think about family more when you are far from them and I had the idea of idols in mind because the act of going to a studio for month, though done on the cheap, was an attempt to create a recording situation I thought bigger bands might have. The Stones in Exile, LCD Soundsystem recording in a mansion in the Hollywood hills; we all watch the footage and think ‘imagine’. I just wanted to do that, within my own means and budget. There was no champagne.

Was it important to get away from London?

It’s always really important for me to get away from where I live and work. It really brings me out of my shell, socially and creatively. I hate any routine or seeing the same people with the same opinions all the time, it really drags me down. I think people get trapped in scenes and comfort bubbles, especially in London. Amsterdam was the first spontaneous adventure I had when I was a teenager so it’s always evoked something in me. I only like travelling to places at the moment if there’s a project to do, someone there to work with, and so it was good to return to the city with a clear goal in mind. Amsterdam’s laid back lifestyle was a welcome break to London’s rat race.


Your press release mentions the record not having ‘to be faithful to one particular genre or trying to fit in to the favoured psych revival’. How do you feel about the psych scene?

I think because I felt I was trying to fit in with that scene with the first album, not on all tracks but with some, that this album had to remove myself from that. The pysch thing didn’t suit me and looking back I’m a bit disappointed in myself, but you only find out what you want to do by trying out things you don’t. There is some great music past and present under the ‘pysch’ tagline and I think it’s a great place to reference as it allows freedom and experimentation. But what the current revival has become is so un-risky. I think some bands have adopted the right aesthetic; the right clothes, haircut, record collection and phaser pedal and forgotten about the songs underneath that all.

I’m sure a lot of these bands are great but I’d like to hear them laid bare sometime without the pysch sheen in front of it. With recording this album, again, it was important to getting away from London and all that. I wore slippers and comfy baggy clothes the whole time and didn’t care. None of the other band members are really pysch guys so when they came out to visit, we were putting on a lot of different music to listen to in the evenings. Callum from the band has great taste and he was playing a lot of Leonard Cohen’s Death of a Ladies Man while we were in Amsterdam and I think some of that seeped through to the finished album. I wanted to draw a line under any pysch association with this album so I would have the freedom to make whatever records I wanted in the future without any pressure to maintain an aesthetic.

What got you into music?

I got into music very late and its always something that’s given me insecurities, being surrounded by people in London who have either grown up here or been into good music and been in bands since they were teens. I came from a small town with no noteable identity. When I came to London at 18 it had a genuine eye widening effect on me. I got turned onto so much in that first year I was here, I think I’ve been playing catch up ever since.

This city’s definitely shaped me despite it’s occasional downfalls. By the end of my first year here, I ended up driving my friend's garage punk band Sex Beet on these small European tours and it blew my mind. All I wanted to do was travel and I saw these guys doing that and (just about) breaking even, so I really caught the bug then. I got home and started relentlessly learning the guitar. It drove my housemate, who was the drummer in that band, insane but the next winter they had booked another tour and they agreed to have me support and he agreed to drum (so I must’ve learnt something).

My first show was in Paris and that tour ended with me in jail for a month in Malmo Sweden for a driving offence. I could’ve seen this as a deterrent or a fateful warning to turn back around and forget all this music lark, but I saw it more as a thing I’d committed to now. I’m stubborn like that. It was more likely I was just being an idiot and needed teaching a lesson. But I guess after that tour and event, I’d decided that’s what I wanted to do. A year or so later I joined the Proper Ornaments and through them I really caught the music writing bug. Max and James are such good songwriters, it really pushed me to try and hone that craft. There’s a healthy competition among some of us, which you’d only get from living in a city like London.

Small town tastes didn’t offer me much, I had to wait until London to really hear the stuff that’s shaped my taste. My parents weren’t that into popular music (until years later I found all their Beatles records and scalded them for not playing them to me when I was younger). I was a Brit pop kid I suppose. I loved Blur and some Oasis songs. But I kind of just went with the radio taste at the time, so I guess by the time I was a teenager it would have been whoever was playing at Reading Festival or something like that.

I came across Pale Blue Eyes by The Velvet Underground in a playlist one of my friend’s older brothers had made, but the tracklisting had no artist names so I didn’t realise until years later that I’d actually heard something good. I remember playing that song over and over under my covers at night when I was pretty young. If I was less shy, I could’ve just asked my friend’s brother and saved on a lot of years of bad music. I didn’t really find any music mentors until London unfortunately.

What are you obsessed with right now?

I’ve been directing a lot more music videos recently so that has been taking up most of my time. I do all of Wesley Gonzalez’s videos so I guess I’m obsessed with him! I always try and watch films but I’m drawn to documentaries more at the moment. I saw The Act Of Killing for the first time recently and it blew my mind. Musically, I’m giving Arthur Russell most of my time right now. He tried every genre so that sits well with me!

How do you think your sound is evolving on album two?

I think the songwriting moved forward with the second album; there are clearer structures, hooks and melodies. The obvious musical evolution is the inclusion of strings. I knew I wanted strings on this album from the start and would sing in ideas for lines while we were at the studio. But these ideas weren’t able to be realised until we came back to London and Richard Jones stepped in to arrange and record the strings.

There is a lot more space on the second album, the first was quite blurry, I kept layering tracks and having instruments play all the way through a song because I thought they had to. This time round I knew it was OK, or better even, to have an instrument sit out a whole verse for example.

What artists do you look to when setting the bar for your own success?

Unfortunately I always set the bar too high for myself. I’ve got better at this recently and I think the recording of this album was a good example. I used to look at bands and think why do they get to do that, or why do they get to go there. But now I just do my own version of what is it I’m jealous of.

John Dwyer’s work ethic is of course one to look up to and he’s managed to create a situation where he answers to nobody. Everyone wants that right? I’m always changing my mind with what kind of career I want in music so it’s hard to compare yourself with someone, as everyone’s situation is different. You could look at a band or artist that appears to have ‘made it’ but they might feel creatively trapped and not be able to tour when they want or all hate their label and manager, you never know. So I’m happy with how things have gone so far.

What's coming up for you?

I’m starting to think about the next album now, but very much not forcing anything. All I’ve been concentrating on at the moment is the release of the record and preparing for the few live shows we are doing with a string quartet. It’s really rewarding to hear the songs performed live with all the elements from the recordings. I’m continuing to make music videos and I’m planning a tour in early 2018.