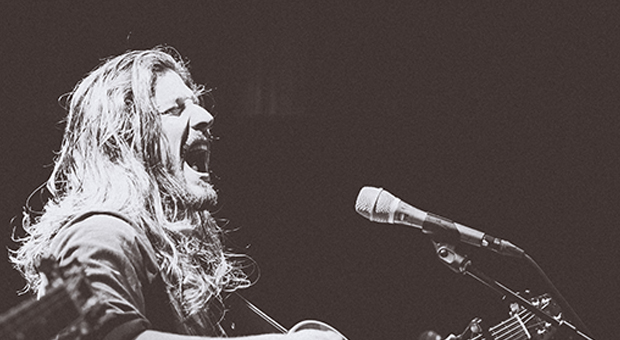 'When you’re funding a record yourself, you’ve got to make everything count': Brother & Bones on the art of DIY.

When we filmed Brother & Bones performing their early song For All We Know back in 2012, the video became one of our most-viewed of the year.

Fast forward to 2015 and the folk-rock five-piece have gone from strength to strength, with an army of devoted fans on both sides of the Atlantic to prove it.

Following a European tour, plus support slots with BRIT winners Bastille and Ben Howard, they recorded their debut album at the fabled East West Studios in LA.

The set, which tips its hat to Pearl Jam and John Martyn, is released tomorrow (4 September).

We last spoke to you three years ago and a lot has happened with Brother & Bones since then. What’s been a highlight for you?
We’ve had some great tours and it’s been amazing to get asked to support Ben Howard and Bastille. Really strangely, we got booked for a festival in Colorado on a bit of whim by the booker. We didn’t have any presence in the UK at the time, but he’d seen a video we did with you guys in 2012. It convinced him to take a punt on us, which is pretty random!

How was the festival?
We ended up getting booked two years in a row. The second trip was pivotal in us recording our album, because we decided to do it at East West Studios in LA before the festival. So the combination of playing a gig 10,000 feet above sea level in the mountains of Colorado and recording the album made for a pivotal moment for Brother & Bones. Being an unsigned band, it’s not something you expect to be round the corner. There’s a lot of hard graft, which we enjoy, but to be out there, doing things like that, felt pretty special.

How has your sound evolved since you first started out?
I think any band or artist is always trying to evolve what they do. For us, there’s positives and negatives in doing the acoustic stuff alongside the heavier stuff. We always saw the heavier stuff as our true direction, so on record at least, we’ve evolved in that way. Live, we’ve always tried to use those dynamic parts of our set-up – we always wanted to do more intimate arrangements alongside the big moments. I think, with the album, it’s the first time we’ve managed to really capture that on record and show people the full scope of what we’ve got to offer. The fundamentals are still the same though – I still play acoustic guitar on everything. Everybody’s taken their specific sound to the next level. We’ve matured as musicians and our tastes have evolved.

You’re just about to release your debut album – what took you so long?
We don’t have a record label breathing down our neck so we’re masters of our own destiny. It’s amazing and it’s given us time to evolve and develop and find our sound. We’ve been working to our own deadlines so we suffer from the constant thought that most artists have – there’s always a better song around the corner. As soon as you stop thinking that’s true, you’re kind of screwed anyway.

So, it was partly that, and partly trying to find the right time, and figuring out whether we wanted to do it with a label or by ourselves. Those conversations take time and they all come out in the wash. But I guess the most important thing is that we had time to develop as a band.

We recorded the album last June but the mixing took ages. Billy Bush who we recorded with was really busy so other projects took precedence. As soon as we pushed the record button everything took a lot of time.

How did you decide you were ready to do an album?
We just knew. We were chomping at the bit by the time we got over to the studio. We decided we had to do an album – we couldn’t do another EP. We knew we had to be really selective about how, where, when and who you record with when you’re on a tight budget. When you’re funding a record yourself, you’ve got to make all those things count. So, at that point, the stars aligned for us. We were really ready for it and everything came together in a relatively short space of time, after debating for so long how we should do it. So it was serendipity mixed in with hard graft, I think.

What was it like to record it at East West Studios in LA?
It was incredible. But it’s not predetermined that you’re going to make a historic record when you go into a place like that, even though Pet Sounds was recorded there. A lot of our favourite bands have also worked there, like System of a Down, Red Hot Chili Peppers… it’s not a prerequisite to making an amazing record but it’s definitely an inspiring environment to be in. It was a bit of pipe dream really.

How long did it take?
We recorded it all in 10 days, so it was all over in the blink of an eye really. We were really in the zone, fully concentrating every day, so it just came and went. When it was over, we thought, ‘fuck, that was incredible’.

Now it’s finished, how do you feel about it?
I haven’t really listened to it. I never listen to any of the records we make. My head’s too far into making the next record. We’ve been concentrating on that a lot. As mad as that sounds! I’m excited it out though. There came to a point when we had to bookmark a chapter of our musical lives. The album is part of that first chapter. Everything beyond that is album two. It’s nice to have a body of work that’s representative of where we were at.

You’ve built a really loyal army of fans – can you talk to me more about that? How do you connect with your fans?
From the start there was no big hype. We were in the same position as any band that doesn’t get signed right away. But we were relentless. First of all we had to convince promoters or venues to give you a gig – and when we couldn’t we’d put our own gigs on. We’d hire a PA and get all out friends to come down to a barn in the middle of Cornwall. We’d sell tickets. Then people would start talking.

Part of it is driven by the belief that it’s what you want to do. You have to subscribe to the lifestyle of making and playing music. If you’re willing to take all the bullshit that comes with it, you’ll be able to make it work. If you believe in what you do, there are going to be others who believe in it too. Maybe we’ve been lucky, but we just keep on keeping on. You’ve got to make things happen for yourself, and these days you pretty much can. If you have friends to help you out, I’m sure they will. It all becomes a cycle of development.

How about making a mark online?
It’s not been an overly conscious effort. We’ve just always been aware that we don’t want to be annoying and relentless online. People write books on how to use social media but I don’t know about all that stuff. All I know is that we should be strict with everything we put out. We’ve made loads of stuff that hasn’t made the grade so we haven’t put it out. Loads of videos that will never see the light of day. You need to filter the stuff that’s not good enough to represent you.

We are really lucky that there are fans who are committed to coming out and seeing us again and again. We feel really fortunate for that.