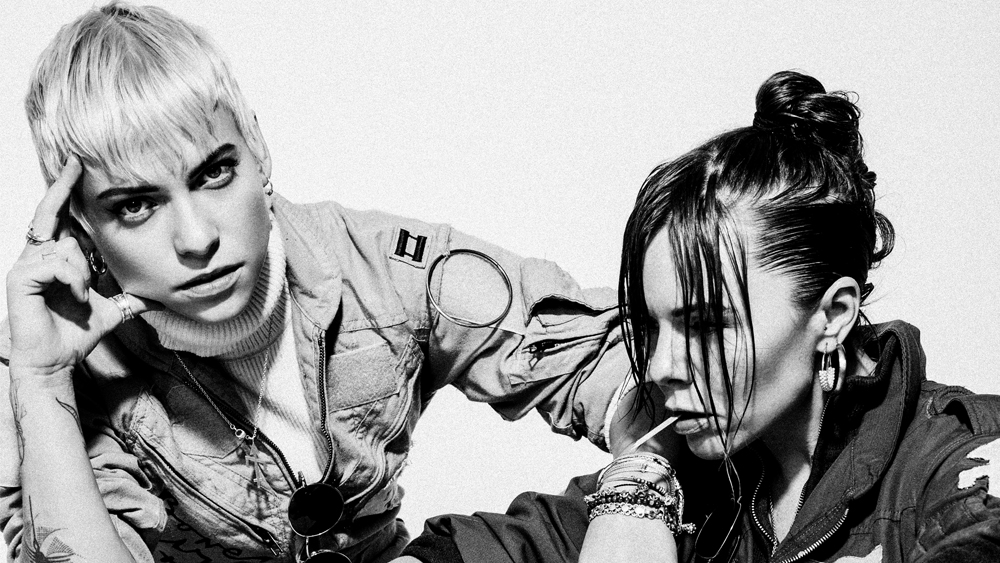 The Camden band are certainly riding high, having secured a Best Rock Performance nomination at this year’s Grammy Awards.

The nod is even more impressive given the track in question, Pretty Waste, is from their debut album.

The early-career high has put them in contention for a gong at one of the most prestigious awards ceremonies in the world alongside Brittany Howard, Karen O and Danger Mouse, Rival Sons and Gary Clarke junior.

Rosie Bones and Carmen Vandenberg formed the duo in 2014 and quickly caught the attention of Jeff Beck, who later enlisted them to co-write his 2016 album Loud Hailer and to subsequently perform on his tour.

Following the project’s conclusion Bones UK got back to focusing on their own music and last year they released their self-title debut album via Sumerian Records.

Ahead of the awards ceremony we caught up with the duo to get their take on their Grammy recognition, the story behind their debut record and what they have lined up next…

Why don’t you start by telling me how you found out you’d won a Grammy?

Rosie Bones: We’d been on this big night out and didn’t get home until about 4am in the morning. We had a cigarette on the balcony and went off to bed but then Carmen got a message from the head of our label saying, ‘Call me right now, it’s an emergency.’ She thought he’d crashed his car or something! So Carmen called him and he answered the phone saying, ‘Am I speaking to Grammy nominated Carmen Vanderberg?’ and she was like, ‘Shut the fuck up”.

It was all a bit overwhelming. There was a lot of disbelief and a lot of noises that we didn’t even know it was possible to make. We woke up our producer, who we live with, and told him to make us Bloody Mary’s, which he did. So, we had Bloody Mary’s and a cigarette on the balcony and watched the sunrise. We called our families and our friends and then went off to bed.

Carmen Vandenberg: When we woke up it felt like it had all been a dream. I had to check my texts to see whether it had happened, or I’d made it up.

Rosie: It was beautiful! We say this a lot, but we really don’t feel like this is just our nomination. We feel like the underdogs. We never, ever thought that we could be nominated for a Grammy, it’s so silly. We see ourselves as the beacons of hope for all the other little bands struggling away. If we can do this anyone can do this. We’re doing this for all the Camden bands, all the LA bands, all of the New York bands, everywhere, all over the world. All the bands that didn’t think that something like this could ever happen for them.

Everyone made speeches and were so supportive. We really got that feeling of comradery and that it really was for all of us. It isn’t just about us. We happen to be the ones going to the ceremony, but this is about all of us ramming our heads through the drawbridge.

Are you fans of any of the other artists nominated in your category?

Rock has historically been dominated by male artists, but three out of the five nominees are women – do you think women’s experience of the industry is improving?

Can you talk me through your debut album?

Carmen: We didn’t necessarily set out to create an album. We’d just written a lot of songs and throughout that time we’d been releasing singles, then we found our label Sumerian so it just came to the point where it felt right. It was great to showcasing everything that we’d been working on and everything we’d been learning.

And am I right in thinking that you create all of your own music videos?

Carmen: Yeah! Rosie comes up with all of the concepts and collaborates with other directors.

Rosie: Carmen’s really good and getting things done. I just come up with stupid ideas like, ‘Guess what we’re doing for this thing!’ and Carmen brings it all together. But yeah, we do all of our own artwork.

You had an early fan in Jeff Beck – what was the experience of working on his Loud Hailer album like?

Rosie: It was amazing! Carmen met him at a party and then he came to see a Bones show and really liked the band so asked us to write his record with him. It was insane. So we sort of stopped doing Bones for a year and focussed on that, then moved to America and picked everything back up.

Who would you say your primary inspirations are?

Carmen: I’ve always had a passion for blues to be honest and old blues guitarists. I was captivated when I was a child and it always stuck with me

Rosie: I’m a huge songwriter fan – Randy Newman, Paul Simon. I love Paul Simon! He’s one of my absolute favourite lyricists of all time. His story telling is just so brilliant.

How important do you think it is to make a statement with your music?

Rosie: I think it’s so important. There’s a lot of bands who just wanna talk about love, or you know, say things without really saying anything. That’s totally cool but for us, music is a vehicle for us to empower people, to make people feel better about themselves, and to get our message across. Music is so powerful and, in our opinion, sometimes artists with the most exposure don’t use their platforms to provoke conversation or to uplift other people and I think that’s such a shame. Especially in the kind of world we’re living in. I don’t think everything needs to be preachy and political but use your lyrics to say something other than we’re going to the party and we’re going to have a dance. For us it’s so important that we use our platform to say something that matters.

How do you respond to people that say musicians should ‘stick to music’ and refrain from making statements?

Carmen: I say they should go and watch a different show.

What have you guys got planned now that you’re officially Grammy nominated?

Rosie: We’re planning on getting really arrogant, not speaking to any of the people that supported us and cutting off anyone that was with us from the beginning and getting a new bunch of dickhead friends. We’re also going to start speaking with American accents and being really rude to waiters wherever we go. [laughs]

We’ve got loads on. We go on tour with Korn in a week and then we’re off on tour with Royal Blood, which is fucking sick.

Carmen: And loads of other fun stuff that we can’t quite talk about yet! We’re just going to keep on working. The Grammy’s is great, we’ll have a fun night, but we’re just excited to keep working.

Rosie: Yeah, it’s gonna be great. We can’t wait to see everyone dressed up. It’ll be hilarious. Whatever happens, it’ll be fucking hilarious and we’re definitely gonna have a few whiskeys.