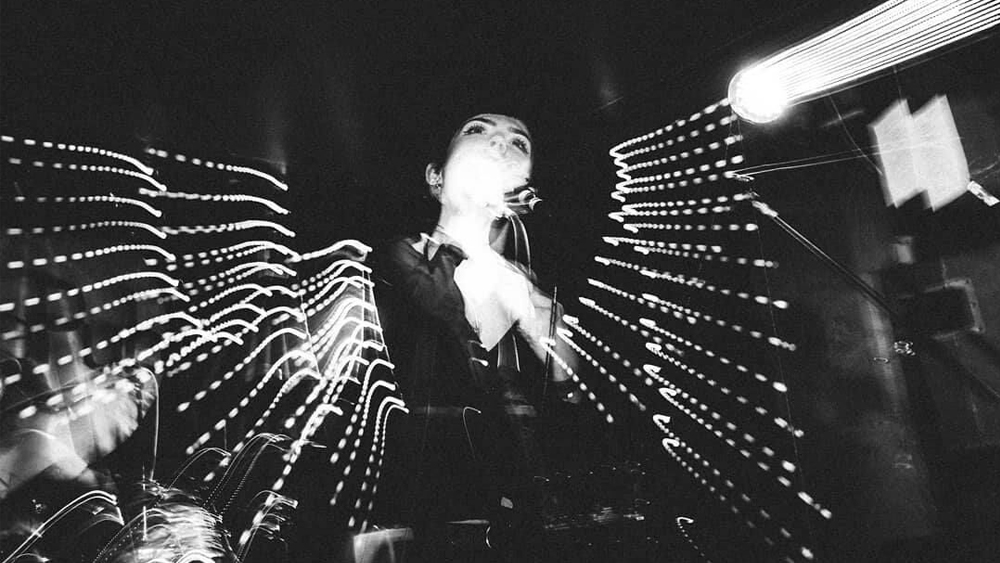 Featuring members of noise rock trio Exit_International and Newport punks Salt Bath, Bodyhacker have emerged as one of Wales’ most exciting new bands with an already formidable live reputation.

Eager to commit their merciless and singular sound to tape the trio recorded their debut release last year.

The brevity of the four track Demos, coupled with the band’s lean set up of drums, bass and vocal, offer little indication of the riot that lies within.

Implying an affinity with the thrilling unrest of bands like Girl Band and Pissed Jeans while suggesting the heritage of post-hardcore legends Shellac and Scratch Acid, Demos sets out the band’s stall as inexorable noiseniks.

Amber: Adam and I met a few years ago working in a coffee shop. I used to listen to Pixies whilst doing kitchen shifts and we instantly bonded over music. I’d neglected making music since my late teens and Adam had tried to encourage me for years to get back into it. Josh had known Adam from his other band Exit International and had sparked an interest in having a jam. They wrote a few riffs and basic song outlines, invited me in to try some vocals and Bodyhacker was born!

Adam: A searing skillet of blistering noise-punk power-fury with clown shoes played by a band who are literally just about holding it together.

Was it a conscious decision to have just bass and drums and no guitar?

Adam: In the beginning we didn’t really know what Bodyhacker was going to be at all – the main aim was just to make some noise between the three of us. After we got a few songs written it was quite obvious that no guitar was necessary for our sound. I don’t think we’ve ever even discussed the idea of getting a guitarist – it’s just always been a quiet agreement between us.

{ ; } }
What’s your take on the noise/punk scene in Wales currently?

Amber: There’s a few people putting on awesome things at the moment and its awesome to see! We’re big fans of the Cosmic Carnage and Lesson No.1 shows (Rich and Noel have such a great ear for incredible bands). Cardiff has had a super tough year with venue closures (Buffalo, Gwidihw) but there seems to be some super cool spaces being used as music venues now; its impressive to see how our local promoters and musicians are thinking outside the box to continue to make gigs happen! We appreciate that so much!

You’ve already earned a formidable live reputation. What do you prefer – writing and recording or playing live?

Amber: Although I love the process of piecing everything together, and the rush of playing a live show – for me it’s all about the time we spend in the practice room – just the three of us. These guys are my best pals and being able to express ourselves as a collective is something I’m super grateful for!

How did your Demos release come about?

Adam: After writing six songs and playing a handful of gigs, we realised we needed something other than my shitty phone recordings of us practicing to give to promoters. The six songs were recorded in one day with the super talented, super lovely Chris Saunders at One Louder Studios in Newport and so fit were they for human consumption that we decided to release it on cassette thanks to Ben at Pretty Hate Records who we jumped at the chance to get onboard with. Thanks Ben! We ended up taking two songs out and releasing just a four-track demo in the end. It’s really raw and rough but in a good way. Available with super dynamic range on Stereo Cassette via Pretty Hate.

Do you have plans for a full-length LP?

Maybe! We’re in the process of writing at the moment but we’re not sure what the outcome is going to be. We’re all really busy with totally opposite schedules so finding the time to get together can be tricky, but when we’re happy with what we’ve got I’m sure it’ll find its own shape, whether it be another EP or an LP.

What, for you, makes a great record?

Amber: Some of my fave bands are The Smashing Pumpkins, Pixies, Big Black, Slint, The Jesus Lizard, Couch Slut, Sleater Kinney, Chad Vangaalen etc. When I was in my early teens there were a local band in Essex called Vellocetta who are my first memory of watching a female fronted shouty noise punk band. I was obsessed for years after first seeing them at Kelvedon Music Festival in 2010, I remember owning an EP of theirs at some point. I don’t know what happened to them since but yeah, they were probably the band that made me realise women in DIY punk existed!

Josh: Adam and The Ants.

Bodyhacker play this year's Swn festival, which takes place in venues throughout Cardiff from 18 to 20 October 2019. For more information please visit swnfest.com.