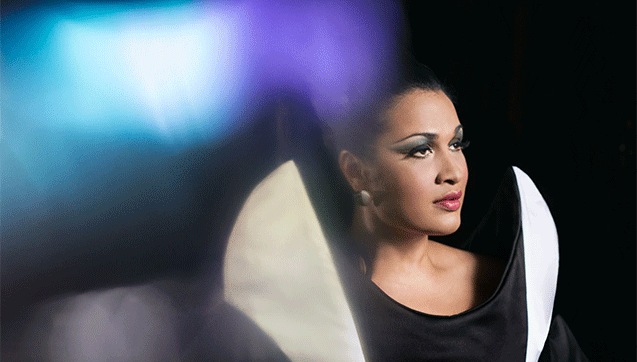 'I realised there is no real support for multifaceted female musicians who utilise technology, so I started a scene for us': music and tech wiz Bishi on her latest venture...

Bishi is a London-based vocalist, composer, performer and multi-instrumentalist working at the cutting edge of art, music and technology.

Born to Bengali parents of a musical inclination, she’s been immersed in the classical sounds of her Asian heritage since a young age.

Alongside studying at the Ravi Shankar School for Music, Bishi has experimented in bands and as a solo artist, finally landing on an esoteric, electronically-fired sound all of her own.

She is also artistic director and co-founder of the Women in Technology Creative Industries Hub (WITCiH).

WITCiH hosts its inaugural three-night The State of Gender? festival next week, which is supported by PRS Foundation and features kindred spirits Gazelle Twin and Chagall, plus a series of four new commissions from rising artists Miri Kat, Vicky O’Neon, Lia Mice and Rebekah Ubuntu.

Here, Bishi lets us in on her musical beginnings and the inspiration behind her new movement…

What was your first introduction to music?

I come from a musical background. My mum was a well-respected Indian classical music singer. When she first emigrated to the UK with my dad, there were no real festivals or spaces for that kind of music. So, she teamed up with Ravi Shankar’s cousin Birendra, and they independently raised the money to take over the Southbank all through the seventies.

What pushed you over the line from music appreciator to music-maker?

I was trained in Indian classical music from an early age, and I was also a chorister and pianist. So, music is something I’ve been absorbed in for a long time. It’s very important to contextualise the fact that my parents were immigrants, as this for me was an immigrant community thing. It didn’t get picked up in any mainstream way; it was very much a DIY scene of artists supporting each other.

How did you draw inspiration from that DIY attitude?

Well, my mum’s story has very interesting parallels with my own life. I took action when I realised that there was no real support, infrastructure or space for multifaceted female musicians who utilise AV [audiovisual] in their work. There’s not really much investment in what we do, so I had to start a scene for us.

What motivates you to make music?

Also, I just got Ableton Push. The ability to write beats and synth lines, and to combine things like my voice looper and chaos pad to make quick sketches, has been really exciting for me. As ever, I’m interested in the intersection of where electronic artists, bands and orchestras meet. I’m drawn to dynamic groups of live musicians who interface with technology.

So where does your love of tech come from?

I used to be a real technophobe, and thought it wasn’t for me. But I was always really into women like Björk and Laurie Anderson, and I loved Wendy Carlos, Delia Derbyshire, Laurie Spiegel and Annette Peacock. I just wondered why they weren’t getting as much credibility, exposure or support as they should. So, it really started from a cultural love, but then with the rise of home studios I gradually got into teaching myself.

What is your take on the position of women in music in 2018?

Well, if you are past the age of 25, not white, queer and slightly larger, you’re on your own. The music industry only can get behind a very, very limited idea of what they think they can sell. And it’s not inherently inclusive - you only need to look at the state of the charts and festival line-ups.

Is that why you established WITCiH?

Yes. There is no shortage of talent, but they need support and investment – and more space to perform and create. WITCiH is trying to form a community, so that we can stand together and make ourselves visible. I want the festival to grow into a commissioning platform and get more involved with developing projects and careers. There’s definitely been a subconscious shift, in that people now realise they have to be more inclusive. But I think we’re at the very beginning of that, and we’ve got a long way to go.

WITCiH: The State of Gender? takes place from 26 to 28 September at The Barge House, London. More info and tickets.