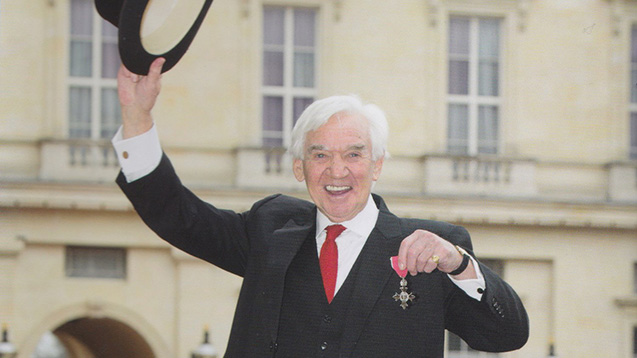 The songwriter behind hits by the likes of Van Morrison, Cliff Richard, Sandie Shaw and The Bay City Rollers chats to us about his new autobiography, Congratulations: Songwriter To The Stars.

If you don't know Bill Martin by name, you almost certainly know him by his songs. During a career spanning over half a century, the Scottish songwriter and publisher has had hits with the likes of Van Morrison, Cliff Richard, Sandie Shaw and The Bay City Rollers – and is the only Scottish songwriter to have written four UK Number 1’s for four different acts.

With five Ivor Novellos to his name plus the small matter of an MBE for his services to music and charity in Scotland, the impresario has now turned his attention to releasing an autobiography, Congratulations: Songwriter To The Stars.

Documenting his wealth of experience in the industry, it's an action-packed read that follows him from his beginnings in Govan, Glasgow and playing football for Johannesburg Rangers in South Africa, to setting his sights on Tin Pan Alley and becoming the first songwriter to write a winning UK song entry for the Eurovision Song Contest (1967's Puppet on a String, sung by Sandie Shaw).

Here, we chat to the acclaimed songwriter to find out more about his illustrious career...

How did you get started in songwriting?

It was always an ambition of mine, since I was about eight. I knew that the only place to do it in those days was in London down at Tin Pan Alley or in New York. I didn’t fancy going to New York so Tin Pan Alley it was. You’d turn up with your work and get rejected or accepted. You just had to hang about to make your presence felt, it was as simple as that. We’d [Martin and his songwriting partners] sit down and write seven or eight songs a day. Some days you couldn’t remember what you’d written. But if you can’t remember, how can you expect anyone else to remember? That was the way it was done.

How did you learn your craft?

I had a blind grandmother who was a piano teacher and she was brilliant. I did initially study piano so I could go to the Royal Academy of Music. I got to Grade 8 but I knew that didn’t matter, my granny told me just to concentrate on being creative.

The charts used to be in sheet music; I would get that and listen to Radio Luxembourg. I'd listen to Johnnie Ray, Frankie Laine, Rosemary Clooney, Doris Day, Frank Sinatra. Then all of a sudden, it hit with Elvis and that’s when I discovered Chuck Berry, Little Richard and so many greats. The music was just fantastic. That’s when you felt the opportunity that you could get involved. Plus, The Beatles opened the door for everybody.

Speaking of The Beatles, how did your song credit for George Harrison come about?

George was in the studio at Abbey Road making All Things Must Pass. McCartney and Ringo turned up to play on the album. John Lennon walked into the studio and George went, to the tune of Congratulations, – which was a real credit to me – ‘It’s Johnny’s birthday, it’s Johnny’s birthday…’ So I sued EMI, stopped the presses and on the album it says: ‘It’s Johnny’s Birthday, based on Congratulations by Bill Martin and Phil Coulter.’ We sold eight million albums, it was phenomenal. You’ve got to have your wits about you, that’s the game.


Your first writing partnership with Tommy Scott led to success with the likes of Van Morrison and Serge Gainsbourg. What was it like working with those artists?

Serge Gainsbourg was the dirtiest man I’ve ever met in my life. I mean dirty by not washing himself. He was always smoking French cigarettes. The first time I met him was in a bar in Paris and there was a girl draped all over him. It was Brigitte Bardot.

Van is one of the greatest talents I’ve ever known. He writes his own songs. He’s the best blues singer this county’s ever known, he's a different class.

How did your Eurovision success with songwriting partner Phil Coulter impact your career?

We were sort of the pioneers of the Eurovision, we were the first UK winners with Sandy Shaw’s Puppet On A String. After she won, we went to France, Germany, everywhere, and translated it into their languages. That’s why it was such a huge success. You’ve got to remember this was the year of Sgt. Pepper's, A Whiter Shade of Pale, Release me and it beat everything. Why? Older people in the flower-power days of the sixties never went into record shops because it was all young people. But then Puppet On A String came out and because it had won the Eurovision, older people could go in and buy it.

It opened lots of doors. I became Van’s publisher, Billy Connolly's and many others.


What do you think about the opportunities for today’s songwriters? Is it a harder business to break into?

I think it’s easier for them now. There’s a periphery of people you can get in with. You’ve still got to be unique, you can’t just keep copying other people. I like Ed Sheeran, I think he’s got a lot to offer because he works hard and he’s unique in his own way. Elton John in my opinion, is the Mozart of songwriting in the UK.

How do you think the industry has changed?

Pop has changed completely. We used to have to sell between a quarter of a million and a million to get to number one. You don’t need to do that nowadays with streaming and downloading. It doesn’t have the same excitement. It used to be quite magical to watch Top Of The Pops on a Thursday. Now it doesn’t seem to have that sense of urgency.

There’s so much songwriting talent but you’ve got to harness it. Songwriters get lazy, they write a song and think that’s it. You’ve got to sell it, that’s the hardest thing. In those days, it was easier to sell because there was no streaming or downloading.

What’s been your proudest achievement in music and why?

Being an ex footballer, I wrote Back Home for the 1970 England World Cup squad. I promised them number one and a gold record and we got that. It was just a thrill for me and I've still got the Top Of The Pops episode when they were dressed in bow ties.

Congratulations: Songwriter To The Stars is out now on Amazon.
Features
Back to top