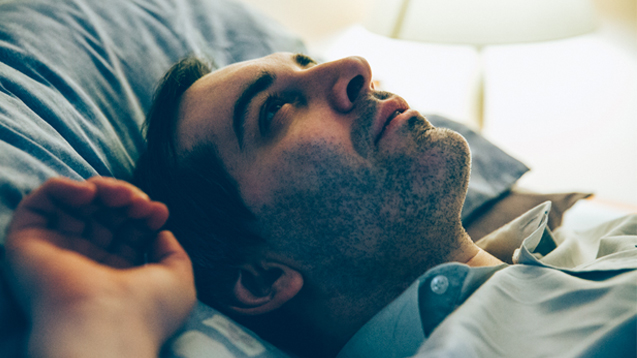 Xtra Mile’s Ben Marwood is back after a year-long illness with his third record, Get Found. He tells us why music acted as a ‘form of rehab’ to pull him back from the brink…

‘When I got too ill, it was tough to admit to myself that I wasn't well enough to be playing or writing music,’ says singer songwriter Ben Marwood.

After the successes of debut album Outside There’s A Curse (2011) and follow-up Back Down (2013) - which include a sold out solo headline UK tour and support run with Frank Turner across the US - singer songwriter Ben was struck down for a year by ill health.

It looked at times that Ben may never make his emotive music again but thankfully he’s now back in 2017 with great new record Get Found mixing up mortality with hope and much, much more. In our extensive new interview on his return, Ben tells us why music acted as a ‘form of rehab’ to pull him back from the brink…

Was there a song or person who started your musical journey?

Well apparently I used to write songs for my mum when we were walking to nursery when I was about two or three. I think my biggest hit was a song about a dead hedgehog we saw (which is an idea ripe for a reboot, I'm sure).

I saw Michael Jackson in the early nineties at the old Wembley Stadium and that was incredible, but I was already on a musical path by then if the songs about deceased animals were anything to go by. I was already buying vinyl aged two or three - presumably with the help of an adult, right? - and as far as I know my first obsession was the theme tune to Postman Pat. I used to run around the dinner table and wore a track in the carpet and, eventually, the record too.

What led you to writing your own music?

I started playing in bands when I was eighteen or so but I've never been that good with people. If I had a bad day, it would all fall apart. I must have been a nightmare. Eventually I started doing solo shows and have stuck at it ever since. It's really hard to have a proper, long-term falling out with your own self, and so I've stuck with it. These days I have a collective of people who play on my albums and they say I'm okay to work with these days, so better late than never.

What was the moment when you realised you were onto something with songwriting?

That's a really interesting question. It was either when they first started letting me headline local shows, or when I started getting invited to other towns to open for people I'd heard of. Both of those were big deals to me and gave me an inkling that something was possible. But there was no big realisation, it was a gradual thing, and a lot of it was down to luck.

I'd been playing some shows and got some demos together, then I met a promoter randomly who invited me to open for people in Devizes, in Wiltshire. It was there I met a young Frank Turner who was on his first ever solo tour and it all went from there.

Get Found is your new record - what does it mean for you?

This record, due to the events that occurred in the middle of it, means a lot to me. They always say that the first album you make is the most special and I can agree with that to an extent, but this third one feels really personal to me. In terms of evolution, I think it sounds like it's an actual single finished piece of work from start to finish. That might sound odd, but when we released the last album some of the feedback from radio was stuff like “this song doesn't even sound finished!” which gave me something extra to think about this time around. So, I worked hard on the arrangements, stopped being so precious about the mixing process, stayed open to new ideas and it fell into place pretty well.

A large part of that was due to upgrading my home studio - I could spend as much or as little time on it as I liked rather than being locked away somewhere paying by the hour. I love the big studio environment but it does make everything time-critical.

You obviously suffered a serious illness which meant you were unable to write and release music – how does it feel to be back with a new record?

It feels like a huge relief. Huge! When I got too ill to really be doing this, it was tough to admit to myself that I wasn't well enough to be playing or writing music especially as it's not something I've ever stopped doing since I was a small child. To actually be able to do it again feels great. It started gradually, with the studio upgrade and then a few hours here and there, but then it acted as a form of rehab and before I knew it, it started taking shape. I would say I'm about 70 percent excited for people to hear it, 30 percent nervous and hoping people will like it - it's been four years since the last album and tastes change, right? Whatever happens, I'm happy it's done. A personal milestone, if you like.

How do you approach the creative process? Have you a way in to your music making? And has this changed since you started?

I was thinking about this earlier and I still have no idea how it happens. I suspect it's all magic. I know that if I sit down to write a song, it won't be anywhere near as good as if I accidentally come up with a chorus as I'm unloading the washing machine. I saw an article somewhere that the creative process works best when your brain is switched off but I suppose it depends on how natural your process is.

Have you heard about Rivers Cuomo's writing process for Weezer albums? It's often regimented and involves spreadsheets and it's methodical, whereas I can only really write naturally. Unless it's one of those days where a chorus pops out of a home appliance, normally I put something on TV that I don't have to pay attention to and play guitar to myself until I hit on a progression I like. Then if I'm lucky I find a melody and finally think about the lyrics. I think that's always been my general approach (even when I wasn't experienced enough to know that's what was happening) but it has definitely refined as a process.

Enjoy yourselves! And practice everything from stagecraft and storytelling/public speaking to vocals and playing styles. Everything is good experience when you're just starting out. I used to work in a rehearsal studio in Reading and occasionally you'd get some bands come in, and they'd have decided what they were going to wear onstage before they'd got a decent set together. I appreciate that the top echelons of the music industry are probably the most aesthetic bits, but a good song will save your shoddy clothes every time.

I have a short headline jaunt around the UK in a few weeks seeing some places that I haven't seen in years! Past that, I'll see if I can round up the band and take them on the road in the summer and, hopefully by the end of the year, Europe. Making good use of that freedom of movement while we still can. I'm really excited to get to Germany.

Get Found is released on 7 April. Listen to Baby You’re a Mess from the album below. You can check Ben out on tour at the following dates in April.