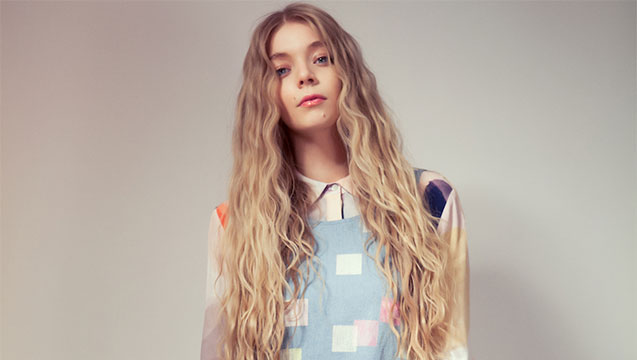 ‘You go from being in front of six million people to being back to your hometown,’ says upcoming pop artist Becky Hill. She’s chatting candidly about her time on TV talent show The Voice five years ago, back when she was just 18.

‘It can change your life because you feel you’re flavour of the month one minute and then the next minute you’re a no one again,’ she continues.

Not quite a no one – Becky has grafted hard since then, building a name for herself as one of Britain’s most innovative new pop voices.

She featured on Rudimental’s Mercury and Brits-nominated number one album Home, performing with them in 2013 at Glastonbury and Bestival, and, more recently, has racked up the streaming hits on collabs with Little Simz, MNEK, Wilkinson and Shift K3y.

Now signed to publishing powerhouse Sony/ATV and major label Polydor – all in the last few months – things are really starting to take off for Becky.

We chatted to her to learn more about her talent show beginnings, DIY tactics, her major signings and her pop muses…

In the last few months you’ve signed to both Polydor Records and Sony/ATV Music Publishing – what’s that been like?

Pretty mad! I’ve been in the industry for five years now, and it seems to get crazier as the years go on. It’s been really nice to make music on my own terms, release off my own label and get recognition for that – not only from Radio 1 especially but from labels and publishers.

People have seen the hard work I’m putting into my music and the industry in general. I think this year was the first time people saw that I mean business here and I’m not messing around.

From getting knockbacks at the start, to thinking, ‘I’m going to do this on my own. Sod the lot of you’, and then having two of the biggest companies in the music industry to step forward and say, ‘Look, we really want you to be a part of us.’ It was a really lovely feeling.

How is this step up going to change things for you?

It’s definitely going to change things financially, because for 18 months I was putting my own money towards my music and all my shows, artwork and videos. We really had to do it on a tight budget. But now we’ve got record label money that can lift that pressure off me.

Generally, I think it’s a bit too early to say yet, because you’re always flavour of the month when you first sign, but there’s been a really, really good feeling for me. The label and publisher want me to do really well, and they see me having a long-term career. My aspirations are met by the team around me, and it’s really comforting to know that.

What’s in store for your first album?

The album has been in writing for the past five years. As soon as I got into music properly I wanted to be an album artist. For the first two years, I was figuring out what sound I wanted to have, and how I wanted to portray myself.

Since I went DIY it seemed I was writing music that I had never written before. It was on a whole other level. I’ve really been enjoying writing. Not only that: the features that have kept me bubbling along. I’ve written every single one of them, so it’s really nice to now be in an album campaign, to have the chance to release an album, to get a proper push and to be taken seriously.

You’ve featured on some pretty big tracks over the last couple of years – how do you feel about that?

They’ve been a little bittersweet. Half of me feels very lucky that I’ve managed to get my voice heard by some really big DJs and producers, and for my songs to do really well, based on somebody else’s popularity and fame.

The other side of me wanted all that success for myself (laughter). After so many features, you’re at risk of being branded as a featured vocalist and not getting the chance to step out in your own right.

But I do feel like times have changed now and everybody’s collaborating. Even the biggest people are still doing collaborations. Look at Beyoncé and Naughty Boy. There’s a lot of room for it now, and I think it takes a lot more to break an artist nowadays.

Where is the most exciting place for you, musically?

It took me a long time to get over this - I was a bit of a music snob as a kid and was really set on being super cool - but I’ve realised that the pop game is one of the hardest to crack. I’ve always written pop music, even when I was 13. But I’ve always wanted it to be cool and credible, and a little bit leftfield.

The sound I love the most is that of Robyn’s and La Roux’s, which is definitely very 2006/2007. I want to do electro-pop. There are lots of different influences, from R&B, to gospel, to soul, to electronic music, in pop music and I’ve always wanted to put that into a little pot and come out with something of my own.

When do you feel you had your first break?

I don’t know. I find it quite difficult to answer that, because I’m not sure whether I’ve had my big break yet. I only say that because there are still a lot of people who have no idea who I am. I’ll feel I’ve had my big break when a song of my own, without anybody else’s name attached to it, becomes a massive success.

You’ve been through the whole talent show thing – what’s your take on that side of the industry?

I think it’s easier if you go on X Factor rather than The Voice. For a long time I was held as the only success story of The Voice and there’s a reason for that… I remember getting a phone call when I was on the live shows from a friend who came off in the battle round. She said: ‘Becky, nobody helps you. Nobody calls you. Nobody sends you any contacts. What you have on the show is what you get. You go from being in front of six million people to being back to your hometown.’

That can change your life because you feel you’re flavour of the month one minute and then the next minute you’re a no one again, which can be difficult. After The Voice, I was back working behind the bar five days a week because I was trying to fund my way in London.

Fuck knows how I did it at 18, because I don’t think I’d know how to do it now, but I kept all my contacts and management cards I was given. The lawyer from The Voice now represents me. I had to put my pride and ego to the side because if not, what else was I going to do? That was a really difficult conclusion to come to at that age. You’ve got to get your breaks where you can.

https://www.beckyhillofficial.com/
Features
Back to top