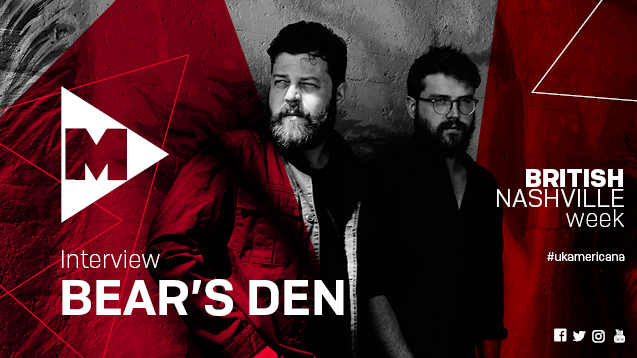 The music of Bear’s Den may have come together in London but it’s the influence of American blues, folk and roots music that have shaped the sound and songs of duo Kev Jones and Andrew Davie.

Emerging from the Communion Records stable and inspired by - among many things - the paintings of Edward Hopper, the short stories of Raymond Carver, and film director Robert Altman’s Short Cuts, the band’s success was initially slow burning but built on a classic sound that defies fashions or fads. Their authentic, contemporary distilling of their love for American blues and folk first appeared on debut record Islands, an album that went silver over an 18 month period, winning the group a huge fanbase at home and in the US.

It was 2016’s Red Earth & Pouring Rain which marked the band’s breakthrough success, scoring them a top ten album chart position. They received an Ivor Novello nod for their song Above the Clouds of Pompeii and have cemented their achievements with tireless touring.

In between gigs somewhere in the US, Andrew from Bear's Den revealed all about their love for American songwriters and how hard work has paid off when it comes to winning on the other side of the pond…

UK Americana seems to be going from strength to strength with the increasing success of British artists in the states, the AMA UK awards and accompanying new chart - what are your thoughts on the health of the genre?

It seems really healthy. Getting to attend the awards ceremony in 2016 was awesome. So many of our heroes all floating about: Bonnie Raitt, Billy Bragg, Ethan Johns, The Staves ... just so many fantastic artists all hanging out and making awesome music.

What do you think is contributing to this?

Well I think America and Canada have produced so many outstanding songwriters and bands and inevitably that's gonna influence the way UK bands/songwriters make music. I grew up listening to Dylan, Neil Young, The Band Through my dad and I feel like that's kinda where I come from musically.

How important is the US as a musical place for you? Is it a key place for an artist such as yourself to go and play and be heard/seen? And how can new acts make themselves stand out on the American side of the pond?

Very important. Touring America is how we started as a band on the Austin to Boston tour with Nathaniel Rateliff, Ben Howard and The Staves. It was an incredible experience and we learned so much from it. American audiences have been amazing to us over the years and we always try to tour as much as we can over there. How to make yourself standout? Gill Landry who is a huge inspiration and legend and we're touring with at the moment. He offered some advice to me the other day when I was a bit nervous before a show. He said: "There isn't a better version of Bear's Den than the one that's gonna play tonight. Just go out there and own it". That would be my advice to any bands about how to stand out.

I think it's hard for me to know really. I think there's a lot of bands who are heavily influenced by American music. I believe that if you're interested in songwriting or music in any way, America and Canada has a deep well of amazing artists and inspiring pieces of writing and music. When I find an artist I really like, I like to find out the kinds of things that inspire that artist and learn more about music that way. Inevitably that will often lead all the way back to folk, roots and blues music if you trace it back far enough. For me, a vague understanding and respect for the disciplines of country, folk and blues music have always been a part of how Kev and I work on songs on Bear's Den so it's hard to know otherwise.

Visit bearsdenmusic.co.uk to find out more about the band and their live dates.

Visit m-magazine.co.uk/tag/country-and-americana over the coming weeks for more interviews and profile pieces with a whole host of UK country and Americana artists.