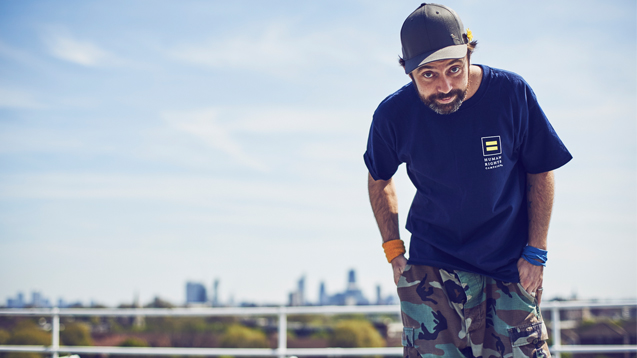 Eight albums in and the prolific protest, satire and social commentary of singer songwriter Beans on Toast shows no sign of slowing - we meet an artist intent on putting a ‘spanner in the works’…

Eight albums in and the prolific protest, satire and social commentary of singer songwriter Beans on Toast shows no sign of slowing.

Beans, aka Jay McAllister, fell into music making via an impromptu musical outing at the Glastonbury Festival. Since then, he’s never looked back putting out songs at an almost alarmingly rapid rate, all embibed with wit and wry observations.

His latest LP, A Spanner In The Works, is his eighth since his debut 50-track double album Standing On A Chair first turned heads back in 2009.

This latest record sees Beans trading in his acoustic for a laptop, instead concocting a heady musical brew using beats, loops, synths and samples. It makes for something of a sonic departure from an artist who, while never having had a plan, has always stood out from his contemporaries due in part to his eccentric music, wired humour and sense of honesty.

We caught up with Beans to find out more about the man, the music, new record and why the election of Donald Trump as US president has him fearing for our futures…

How did your musical career begin?

Both my folks were music fans. My mum was an avid Beatle maniac and my dad loved to listen to country. We used to drive around singing along to Randy Travis when I was younger. Like most teenagers I got bang into the Doors. I loved the film and my dad had all the albums too.

At school me and my mates decided we were in a band before we owned any instruments. We used to graffiti the name around the school but we were led more by the attitude more than anything. Then we decided we should actually make some music. It was a teenage grunge rock band. You have to learn somewhere but we cracked on with that. I would have been 16.

At what point did the idea of ‘Beans on Toast’ come to life?

It was in the mid-2000s - with the band we moved down to London, then when it collapsed I was writing but doing club nights, still enjoying being part of music without performing. There was a point when I’d been writing load of songs, had a name, thought I was going to turn it into a band but I was at Glastonbury and decided to get on an open mic slot and do it alone. I was very much preaching to the converted, singing about being hammered to a load of hammered people so it went down a treat.

I started to think about doing it myself when I realised how it was so much less complicated with just you doing it. Once I’d done a couple of gigs and realised I could just rock up with my guitar and do my thing, it fell into place from there. There was no real plan, just one gig led to another. I ended up doing some shows with Frank Turner and Xtra Mile came to me and asked me to do a record. It was never very thought through.

Spanner In The Works is your new album - how did it come about?

I came up with the name first, then I was out drinking with a mate and he suggested doing a record without guitars or string instruments – just on a laptop. So I employed him to do just that. He’d not made a whole lot of records before but he’s a good friend and I’d known him for a while and knows his way around production software and computers. I’d written all the songs on the guitar, then we explored the endless sounds of a laptop. You can quite easily fall down a giant rabbit hole of squeals and squiggles but we quickly worked out if the song was good, and completely written beforehand, then the recording process would be easy. Writing alongside the computer didn’t really work out as well.

Is it quite a departure for you creatively?

We set out to be different, and it hasn’t got any guitars but it does fit in well with the rest of the records.

The thing I love about making music is that there aren’t any rules and you can do what you want. Every single record I’ve made has been in a different place with a different person. At their core the songs are similar but each album has a different flavour.

How important has playing live been to you?

It’s almost like a circle. You write a song, then from playing them and playing gigs, life takes different turns and puts you into places which are interesting and give you inspiration to write more songs. Fundamentally, there’s no difference between writing a song, recording an album or going on tour. It’s all the process of making music and I enjoy every bit.

You’ll be playing a tour in Independent Venue Week in 2017 - are you optimistic about the future of the small venue?

Yes I really am. I’ve had a change of heart about this. There’s a song on the new album about the closing of venues which is obviously happening at an alarming rate. Things like Independent Venue Week and the Music Venues Trust are brilliant initiatives at bringing this to the attention of the public and are really important. I had a plan to make a documentary to talk about the plight of these venues but during the process I found myself being a bit of a doom monger. Some venues had closed but it’s not like they haven’t been replaced and there aren’t a number of other new and exciting venues opening up in their place. I found myself trying to squeeze some bad news out of it.

We’ve played some amazing smaller venues on our latest tour. Venues change all the time. Times are certainly hard out there but times are hard in a lot of industries. I am super optimistic, venues like Gorilla in Manchester are great and are raising the game. It’s certainly not all doom and gloom.

Have political goings on impacted your music?

It’s had an impact on my heart - this tour kicked off just a few days after the US election results. My shows are optimistic, usually all smiles and although we tackle some big subjects, they are like ‘don’t worry’. To find that optimism in my heart was tricky, we were right in the midst of it all. It was hard to put how I felt in an eloquent way. I wanted to address it in every gig but I didn’t just want to say ‘we are fucked’. A blessing of songwriting is if I can’t work out how I want to say something, at least I can get it down in a song.

Have you any top tips for new songwriters?

I think just to remind people that the song is the most important thing. At the end of the day, as long as you concentrate on the songs and they’re good enough, then the rest of it should fall into place.