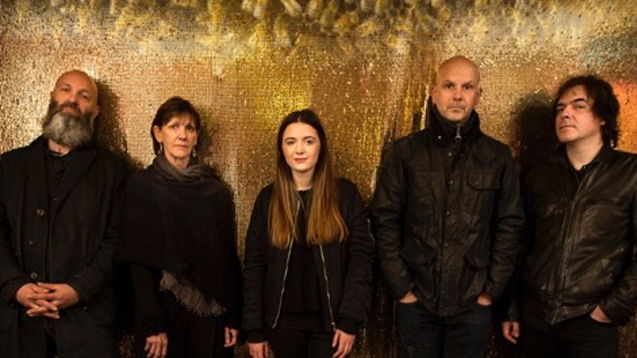 The bee is one of the animal kingdom’s most important creatures and an insect whose plight is at the heart of award-winning art installation, The Hive.

Created by artist Wolfgang Buttress and exhibited at the 2015 Milan Expo, this 17-metre-high multi-sensory experience, inspired by scientific research, is now moving to London’s Kew Gardens for the summer.

Alongside the installation, an improvised soundtrack headed up by musicians Kev Bales and Tony Foster has emerged on indie imprint Caught by the River. The release is a collaboration between the pair (who have previously worked with Spiritualized’s Jason Piece and sonic adventurer Julian Cope), producer Youth, cellist Deidre Bencsik, vocalist Camille Buttress and a live hive containing thousands of bees.

How did you get involved in Be’s One?

The music was written for Wolfgang Buttress’s Hive, which was the UK design for the World Expo in Milan 2015. Wolf wanted music to play an integral part in the experience so had a live link to a real bee hive in Nottingham. Digital and audio information was sent to Milan in real time from there. The idea was the Nottingham bees would trigger musical sounds, depending on their activity so essentially bees were playing the music!

Wolfgang knew of Tony (aka ‘Doggen’) Foster and me via our work with the likes of Spiritualized and Julian Cope, artists who work with drones a great deal. As bees are the ultimate drone makers, he asked us to get involved.

How did you begin writing the piece?

Initially, professor Martin Bencsik, who Wolf had been working with on The Hive, gave us a presentation on bee communication and sounds. So not the most conventional way to start making music. But we heard these amazing sounds that he’d recorded through accelerometers placed within hives. He informed us of their meaning and how the bees communicated information through them. We thought the key was to utilise these sounds, melodically and rhythmically, and to keep the bees at the forefront of the music, then try and compliment them with simple melodies and drones.

Could you explain a little about the creative process - how did you capture the dialogue between human and bee?

Initially we played a feed of Martin’s bee sounds to his wife Deirdre, who is a wonderful cellist, along with Camille Buttress, Wolf’s daughter and vocalist. Deirdre worked out that the bees resonated mainly in the key of C, sometimes in B. Tony and I asked them to improvise, playing along to the bees. After a while Camille came out with this haunting melody and lyrics which she naturally sung in a minor key. Deirdre followed her and they came up with this beautiful piece. With a few edits here and there, this was the framework for the track The Hive.

Because we’d decided early on that the bees should take the lead and all the additional music should compliment that, the dialogue was flipped on its head and any egos removed. This was very musically liberating.


What were the biggest challenges of composing the music?

Doggen and I come from a rock and roll background. So one of the biggest challenges was to make this music interesting and exciting to our ears, without the aid of drums, distorted guitars or big choruses.

We spent hours making slight adjustments, tweaking the mix, thinking what else could be added or taken away. That subtle use of movement and textures became our natural process. We were very careful to stick to our ethos of keeping things simple and leaving space for all the sonic elements.

The record was recorded and mixed at Doggen’s Mouse House studios in Nottingham. We had the Amiina Strings send us files from Iceland, Youth and John Coxon sent us stuff that they’d recorded. Doggen and I also went down to record Jason Spaceman at his home studio. We were fortunate to be able to call on such amazing musicians we felt would be sympathetic to what we were doing

How was working with the 40,000 bees? How did you allow them to have their own space in the recordings?

We would crank up the bee tracks so loud in the studio, it was such an all encompassing sound that we set everything else around them. That gave us some instant musical cues. The hive sound is quite high end, thin and fizzy. So we naturally wanted to add some low end instrumentation initially. Deirdre de-tuned her cello and played some low notes which we added. Then it seemed simple (ish) to just sit other parts between these two frequencies.

The record is split into four parts - what defines each section?

I think the Journey is inspired by The Hive in Milan and how part of the idea was to recreate the British countryside in Italy. So it’s a long meandering meadow/countryside inspired piece, setting up some of the later musical themes. Into is defined by beautiful cello from Deirdre and great piano from Doggen. It feels calm and tranquil, setting up the dark and intense feel of the hive perfectly. The Hive utilizes Martins Tooting and Quacking sounds in a really musical way. These are the sounds of newly born and yet to hatch new queens in a hive trying to assert their dominance. It’s really dark and powerful, and, being the only track with a vocal, and only one in a minor key, sets it apart from the rest. Uplift is the foil to that darkness, trying to bring a blissed out ending to the record.

What were the highlights of working with bees?

Hearing the bee sounds for the first time was amazing! It was so unexpected to hear the beehive. But also, when your starting point of a musical project is basing everything you do on their sound, it’s like any musical barriers come down. It made us start from such an out there place initially, that it really was liberating.

What are the future plans for the project?

We’ve just played our first live shows which was amazing! We have plans for shows in the summer at Caught by the River Thames festival and the End of the Road festival. There’s lots of excitement and ideas around for new music too, so much more to come.

Visit the Caught By the River website to find out more on the project.
Features
Back to top