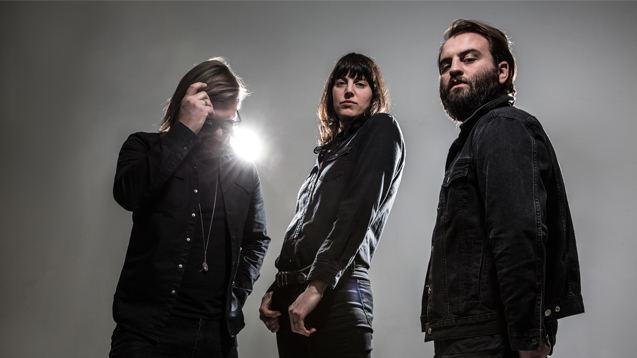 ‘This is now a new era for us’ - Russell Marsden from English rockers Band of Skulls on their new LP, By Default…

Over the course of three well received albums, and a tireless commitment to gigging, Southampton’s Band of Skulls have established a reputation as one of the UK’s best guitar bands.

Their forthcoming LP - By Default - is their fourth and marks a new chapter for the group. Produced by Gil Norton (Pixies, Foo Fighters, Patti Smith) and recorded in Rockfield Studios, the record is the sound of a group on the sharpest form of their career.

The follow up to 2014’s Himalayan, from the English trio - made up of Russell Marsden (guitar, vocals), Emma Richardson (bass, vocals) and Matt Hayward (drums) - the new LP was the result of a renewed commitment to writing and experimentation. Russell lets us in on their endeavours and how 2016 is shaping up to be their year…

I was always a music fan as a kid. When we were at school, there were lots of great songs in the charts, so we always wanted to be in bands from a young age because of that. It was then a case of hooking up with mates, scrabbling some gear together. I met Matt who was a bit younger, and we started making music. This was in the really early days but we’ve made music together ever since. He’s sick of me now of course!

Who were you listening to back then?

At that moment there were loads of great bands, acts like Radiohead. We’d read interviews with these artists, they’d refer to someone they looked up to and we’d go seek them out. It all just opened up like a rock’n’roll book.

When did you realise you were onto something with your songs?

Ha - well I think we’re still waiting for that moment. It’s certainly not a conscious thing. We just wanted to be in a band and each record is a snapshot of us at that moment. This is now a new era for us - we’re back in England, it’s our first major release as a band and as such there’s a different atmosphere around it. We’re ready for it but it makes for an interesting time for us.

By Default is your new record - how did it come about?

We finished our last tour at the Hammersmith Apollo in London. After that, we flung ourselves into a really intense writing session that lasted for most of the year.

We aimed to write 100 songs. We’d never taken any time off to write since we were signed. There’s an element that you’ve got your whole life to write your first record. Then all a sudden, you’ve just got time between airports and gigs to write the rest. Every now and again it’s good to step back and take stock and put some more time into your music.

This is what we did for the whole summer, then we signed a deal, hooked up with Gil Norton and within a few weeks we were working with him. We wrote so many songs but the 12 on the record are the ones we felt talk to each other the best. There’s some stranger music we made that we didn’t feel people were quite ready for just yet.

So that creative breathing space was important for the record?

You can always get an offer to do another gig and it can go on forever. So we felt you need to make a balance between recording and live. It was also really rewarding in the church we were working in. Our environment influenced the songwriting, and the sound of the record. We were going round the church hitting things and sampling them.

It was a great time, a process we really love and it was great as were incognito in this church in our own town. We were hiding out in Southampton and reconnected with ourselves. It was nice to be back where we started out.

How has the touring side of things impacted how you write?

We try not to let it colour what we’re doing too much. Writing songs is very different to the shows. At the same time, the shows are good when people are emotionally attached to the music and they react to it. if there’s no feeling in the songs, then that won’t happen. It’s important to keep it real with the writing.


We’re rehearsing at the moment with a launch party to do. Then it’s right into festival season. Proper touring will take place after summer so we’ll just stay on the road and carry on getting stuck in.

Is guitar music in a good place at the moment?

There are always new bands. But I think it’s hard to be in a band at present. Or at least start one. We were lucky, we had space to rehearse when we were younger. Who has enough space to play in their home these days? At the same time, guitars have never gone away despite the headlines always saying it’s over. We’ve never paid attention towards that.

Any advice for new acts?

Any combination of people getting together will have a unique sound. It might not be in step with the times but stick with it and make that your own. There’s no point copying other people. It’s about discovering your unique recipe and sticking with it.

Watch the video for their new track Killer. You can also catch the band out on tour over the coming months. Visit the Band of Skulls website to find out more.