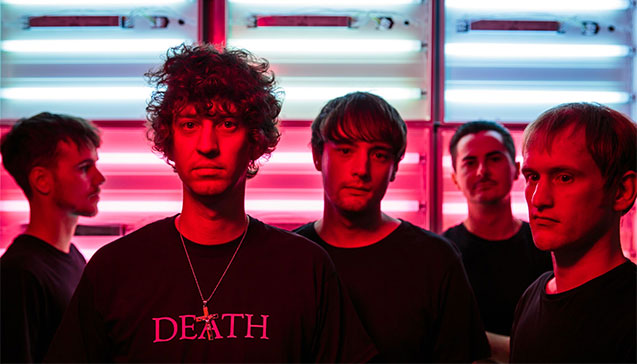 'The sound of sorrow is just appealing isn’t it?' Leeds five-piece Autobahn on their ace new krautrock-inspired album, The Moral Crossing...

Autobahn may sound like they’re beaming their grainy krautrock straight from a layby outside eighties Dusseldorf, but this fully functioning Leeds five-piece are very much alive and kicking in 2017.

Back this month with LP number two, The Moral Crossing, they sound like the perfect soundtrack to Deutschland 83 – their moving parts made up of squealing synths, motorik basslines and sub-zero vocals.

Now on tour across the UK (dates below), they promise a white knuckle ride into the depths of their musical psyche.

We get the lowdown from a band in their prime...

What’s the thinking behind your new album?
The idea was to build on our existing sound, change up the structure of the songs and bring more emotion to the tracks. Most importantly we wanted the record to sound individual.

Where does the darkness come from?
The sound of sorrow is just appealing isn’t it? I think everybody can relate to sadness. What we try to do is push through the darkness. The drums break through that desolate undertone a lot in this new record. It’s as if they’re escaping the torment, looking for new hope.

How did the tracks start life and take shape?
We built a recording studio to write and record this album, so the approach was a bit different to normal. For most of the tracks I’d start with a loop, which we’d then build out into a song.

There were a few tracks which were recorded and then re worked into completely different songs. The single Execution/Rise is a good example of that. The song was originally recorded as a different track, which was then scrapped. I took the drums from that track and we built a new song from it.

How do you think your sound has evolved since your first record?
The structures on this record are interesting, they’re far removed from a standard song. Our early tracks looked to grab your attention, these look to build on emotion.

Which artists and albums have inspired you along the way?
When we started the record I was listening to a lot of Beethoven and Schubert, this definitely influenced the strings on the record. The original ideas around the synth, guitars and drums probably hinted at DAF, 23 Skidoo and early Cabaret Voltaire.

What influences outside of music impact the band?
Everyday life. Everybody feels pain, it’s something that brings us together.

What’s next for you?
We’ve got a UK tour this November, then one in mainland Europe in February. We’ll be heading out to the US in 2018 too, which should be grand!

Autobahn’s The Moral Crossing is out now via Tough Love Records.

http://www.autobahnmusik.co.uk/
Features
Back to top