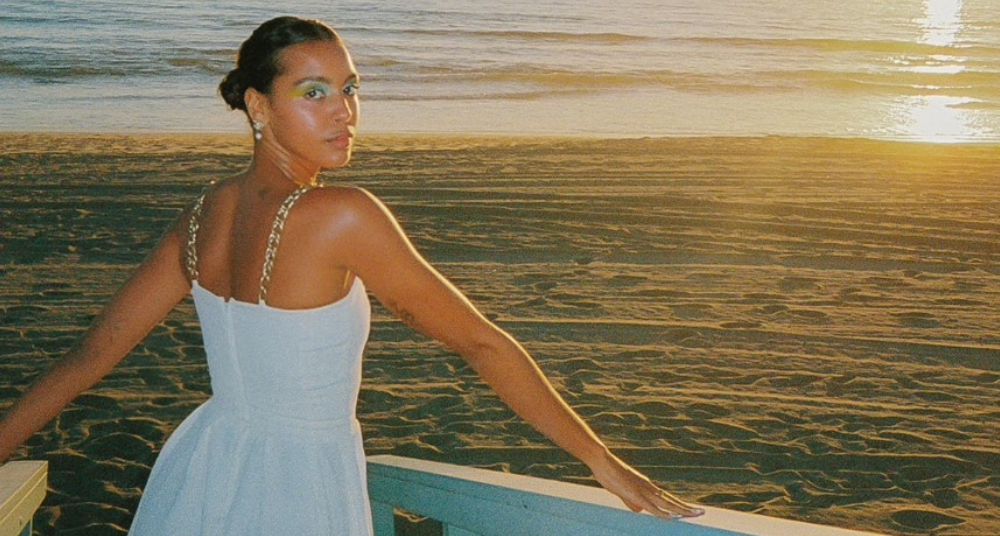 ‘To me, creativity is all about creating something wonderful out of your experiences and having that inspire other people. We’re all just creating and we’re all just making these beautiful things, because life is just that, isn’t it?’

Not everyone can say they have Nas on their list of musical collaborators, but singer-songwriter Arlissa isn’t everyone.

Having already spent years in the industry, in 2018 Arlissa recorded an acoustic version of her song Hearts Ain’t Gonna Lie on Facebook, thinking it would be nothing more than 'a piece of content.' The now infamous clip reached over two million views in just a few days, catching the attention of Jonas Blue and Def Jam Records. From there, things really began to pick up the pace. But, being signed to a major label wasn’t all it was cracked up to be, and the south London-born artist came up against her fair share of challenges while trying to navigate the industry.

Having used the pandemic as an opportunity to reevaluate, Arlissa released her new EP The Lovers back in February, and accumulated more than one million streams in a month. She is, it seems, is back and better than ever.

With so much more on the horizon, we caught up with Arlissa to talk new music, gaining perspective and being your true self.

Sam Ilori: Hey Arlissa, please tell us a bit about yourself.

Arlissa: So my name, spelt Arlissa, is actually pronounced ‘Ar-leesa’, blame my parents. It just confuses people, but yes ‘Ar-leesa’ is a singer-songwriter from south east London who now lives in LA. I just released an EP in February, my first ever body of work, called The Lovers. I released it on Valentine’s Day, just to be extra cool.

Sam: When did you realise that music was your passion and you wanted to make a living out of it?

Arlissa: I think I’ve always been that way since I was very young. At the age of six, I remember singing. My grandma would say, ‘You have a nice voice’ and it’s something that I really enjoy. I love writing music. I feel really lucky in that way that, some people just have that innate feeling inside, where they’re like, ‘This is what I’m going to do.’

Sam: I was going through your YouTube and I noticed you took a few years off, musically. It appears you picked things back up in 2015. From there, you’ve been consistent with dropping videos on your YouTube. Did the break help with your songwriting process?

Arlissa: Yes, it really did. I was with a label that didn’t really understand my vision of who I was as a singer-songwriter. It was really hard. We were just butting heads all the time. When we parted ways, which was the biggest blessing, I got to look inwards and really find out who I was.

So, in that space I got to learn about myself more. Yes, I shared that on YouTube and everything, and that did really well for me. I discovered myself in the process.

Sam: How did it feel releasing music during a pandemic?

Arlissa: It was actually a really beautiful experience. I wrote most of [the songs on YouTube] in the pandemic. Little Girl was the start of it, and I released it straight after I wrote it. At that point I hadn’t even really decided that I was going to do an EP. I was going through a lot of things and it just made sense at the time. I found it to be quite a healing experience to just really take the time, and see how I was living life, all my traits, toxic ones and good ones, and just explore myself through them. I wrote about it and I got to release it, independently, which was a really beautiful experience. I worked with a few producers over Zoom and that was a different experience, and just writing on my own. It was very cathartic, and I’m so glad I got to release that in this time, in this crazy time.

‘The best part about being on stage is having people sing the words back to me. That is one of my favourite things, because it’s such a moment of togetherness.’

Sam: How do you feel it was received?

Arlissa: Well, I think. I know I got a million streams in less than two weeks, which, for me, was a really big deal. For people to have resonated with it and doing covers of it, that was really special, considering how personal the songs are. I really do write from a very personal space, and that can be quite daunting and scary because if people don’t like it, it really feels like they don’t like me. My whole thing is that I love writing to help me understand myself, but I love that people take things from it, and it helps people in their own situations. I find that is, genuinely, the best part of doing it.

To me, creativity is all about creating something wonderful out of your experiences and having that inspire other people. We’re all just creating and we’re all just making these beautiful things, because life is just that, isn’t it. Life is just a creation. I just feel like it’s nice to be part of that.

Sam: Tell me about your song Hearts Ain’t Gonna Lie…

Arlissa: That was even crazier. I wrote that song and I put it out, but I wasn’t expecting anything. I literally saw it as, ‘Oh, here is a piece of content,’ you know, in that world. That one got two million views in a few days. I put it out on Facebook and wasn’t trying to do anything crazy, I just thought I should post a video of me singing a song I wrote. Now, that’s had 80 million views and it still blows my mind that people love that song. I learned a lot from that moment. It attracted the likes of Jonas Blue and we did our own version which is really cool. I’m glad I did that. It led me to then start working with Def Jam, which was not, for me, the right fit. This was in a time where working with that label was held in high regard due to the fact they have made history, but, again, I felt I could not be my true self. It’s funny how you know who you are, and then a lot of the time you’ll sign a deal and they’ll be like, ‘We love you. Now change everything.’

That led me to, again, gain my independence back and begin to focus, and to be more tenacious. I can write until the cows come home, but when I was independent before, I couldn’t afford the production, so that’s why everything was acoustic. It was really nice to be put in a space where I could say, ‘Now I’m earning from these songs that I’ve written and I’m going to put that money into creating more music, creating it with producers that I love, and creating a sound that I feel so strongly about and is really who I am.’

Sam: How did the collaboration with Nas come about?

Arlissa: The collaboration with Nas was the very first thing I did when I signed with Def Jam, which was crazy. I wrote this song and I was, originally, the demo vocal on it. I wasn’t even supposed to be the artist singing in it. I remember they sent it out and Nas genuinely wanted to do a rap on it. He liked the demo vocal, so I just ended up staying on the record. I remember feeling like me, a 19-year-old girl just writing in a studio and not even really thinking anything about it then suddenly, Nas is doing the record and I was flying out within two weeks to shoot a music video. It was so fast paced. He wrote the rap whilst on the set of the video shoot. At the time, I didn’t know what to expect as it felt like I’d been catapulted into unknown territory. At the same time, I felt very comfortable as it just cemented the fact that this is what I want to be doing.

‘The pandemic really forced me to sit with myself and confront my subconscious thoughts. It made me really look inwards and question my true feelings.’

Sam: You’ve mentioned that the song Healing was an attempt to gain perspective. Did the pandemic help, or hinder this in any way?

Arlissa: It definitely helped. It’s really weird, because I wrote Healing from such an subconscious place where these words were just flowing. I wrote the song before the pandemic, but I recall the producer asking, ‘Is this how you feel? Where is this coming from?’ in one of my studio sessions, to which I responded, ‘No, no, this is all made up.’

It is only when I started performing the song live that I realised how the lyrics made me feel. I began asking myself ‘Why has this hurt me? Why do I feel this so much?’ The pandemic really forced me to sit with myself and confront my subconscious thoughts. It made me really look inwards and question my true feelings.

Sam: Do you feel your career would have been different if you’d have grown up in America?

Arlissa: Oh, it would have been so different. I learnt a lot being a Londoner and that’s such a part of who I am. I can’t imagine having even written anything even close to the music that I’ve written. I don’t even know what I would have been doing, especially because my family are from Louisiana and Texas, so I may not have ended up in LA, who knows where I would have ended up?

I love where I live now because I’m such a nature girl. I enjoy going on my hikes and rock climbing. I love being out there and grounding myself. It’s hard to do that in the city and with music being such an important part of my life, I live here because I can do a lot musically, but I can also get away from the noise too.

Sam: I bet you’re looking forward to performing The Lovers EP when things return to normal.

Arlissa: I just can’t wait to perform again. I feed off people’s energy. The best part about being onstage is having people sing the words back to me. That is one of my favourite things, because it’s such a moment of togetherness. People resonating so deeply with those words and the melody. I miss the feeling of positive vibrations and togetherness. It’s such a beautiful feeling to feel close with everyone and that is what I see and what I can’t wait for.

Sam: What’s next for you?

Arlissa: It’s going to be a constant stream of music, so just get ready, it’s a lot.

Stream The Lovers on Spotify.