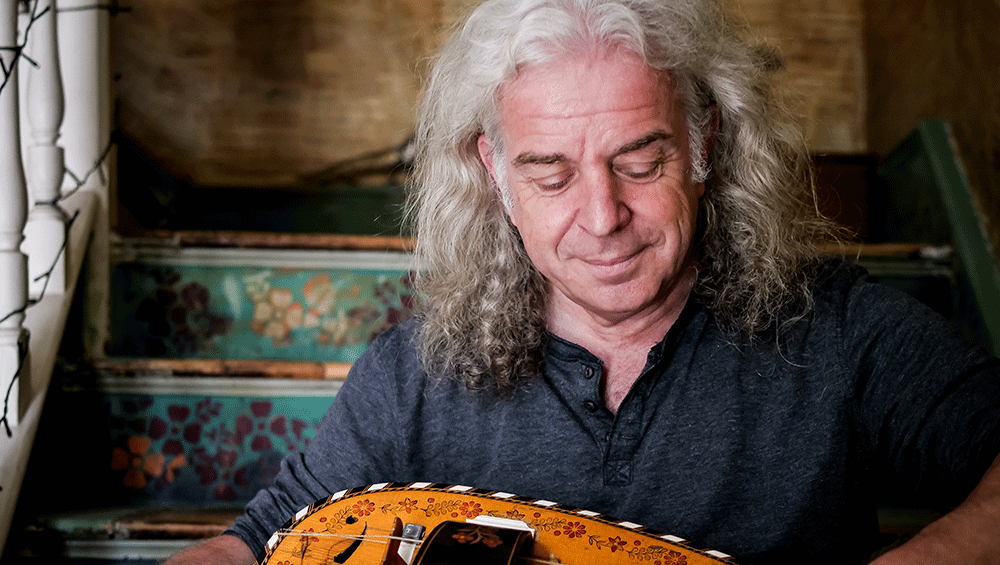 Andy McCrorie-Shand, the Teletubbies theme tune creator, shares his tips and tricks for excelling in the psychedelic world of kids' TV music...

Composer and songwriter Andy McCrorie-Shand is the brains behind iconic kids’ TV themes including Teletubbies and Rosie & Jim.

With a background in classical piano and choir, combined with a deep love of psychedelic rock and an understanding of electronics, Andy brings bags of eclectic creativity to his scores.

How did your music career begin? And what was the breakthrough moment for you?

I was fortunate enough to be born into a musical family and following the usual piano lessons/exams there was a wonderful baptism into the world of rock when l heard Frank Zappa’s Hot Rats album for the first time. Next thing l know, l’ve got an electric guitar, swapped the piano for electric organ and l’m auditioning for various bands in the early seventies. I ended up in a prog-rock band called Druid and signing to EMI in 1974, so that was a pretty big breakthrough moment!

How did you get into the world of children's TV and hook up with Ragdoll Productions?

At the end of the eighties I was working as a freelance writer and producer of music for TV following a four-year stint at KPM Music Library as a music producer. I was producing an album with the KPM and Radiophonic Workshop writer Paddy Kingsland (and learning a great deal about writing for TV in the process). He had a phone call on a Friday afternoon in the control room from Anne Wood (the Ragdoll Productions founder) having worked for her previously. Anne asked if he was available to repair some music on an animation over the weekend. Paddy replied that he was busy but there was someone nearby who might be able to help and handed the phone to me. I duly repaired the music and in a couple of months Ragdoll asked me to be involved in the music for a new series for pre-school children, Rosie & Jim. Talk about being in the right place at the right time! I am incredibly grateful to Paddy for his kindness and l have tried to do the same for young writers myself whenever possible.

What's the piece of children's TV music of which you are most proud?

I love the opening to TOTS TV (made for CITV by Ragdoll from 1992) The show is lovely, like a pre-school soap and the characters are delightful - no narration, just live-action puppets, a donkey and a furry thing that lives with them.

The music was written and recorded in my first studio-in-the-garden using Creator music sequencing software running on an Atari computer wired up to a clunky Sony U-matic 1630 video player and l loved every minute of it - l think it’s my favourite.

A close second though is a segment from Teletubbies showing an animation of the tree of life - it is beautifully drawn (given the nature of CGI in the nineties) and it was a joy to add the music. I think the music works so well with the pictures, telling just enough of the story and creating exactly the right atmosphere for what is essentially birth-life-death for very young children in about two minutes 30 seconds!

How did you get involved in Teletubbies?

Teletubbies was made by Ragdoll for BBC and we started work on it late in 1995. It was great to be asked to write the music as part of the production team that had created Rosie & Jim and TOTS TV, but the show was aimed at even younger viewers and so there was a lot of research into how little ones learn language and generally view the world.

There was a lot of character and story development, and l was lucky enough to be involved from the beginning, which led to me having a better understanding of what the writers and producers were trying to achieve. And when l started work on the show l was STILL using the Atari and clunky Sony U-matic!

Of course, what started life as just another Ragdoll TV show for children took on a life of its own and 20 or so years later is still going strong around the world. It was hard work - 365 half-hour episodes and other assorted off-shoots - at 8am most weekdays a motorcycle courier waiting outside my house ready to whisk away my latest musical offerings to Pinewood Studios and beyond was the norm. Still had fun though, despite the deadlines.

Could you talk a little about the creative process with this style of music?

For me, the most important parts of starting a new pre-school show are the theme song and the instruments the ‘band’ are going to play. Once those are sorted everything else seems to slot into place. The theme tune is the result of many meetings with writers and producers along with puppets, dolls and enough Stick-it notes to obliterate complete walls. Armed with this info l go for a walk - mostly in the countryside but sometimes around a town. Many walks, during which time the melody and lyrics are formed. Once the theme tune works in that format then it’s into to the studio to flesh it out with the right instruments and sounds. All this is done at quite an early stage, hopefully giving it chance to become part of the show from the beginning.

Once l receive edited shows l can start the process of writing the incidental music to picture. Basically, l play along to the footage like a silent movie pianist until the music starts to mould itself to the action at which point l record a rough framework to picture and then start to build on that.

The Atari has gone, and the clunky U-matic! I now run Logic X on various Mac laptops and desktop computers, which are bliss compared to their predecessors. I also add an eclectic variety of acoustic instruments for good measure. No more motorcycle couriers waiting to whisk the music away though, just the whims of a delinquent broadband system hell-bent on taking the longest time possible to deliver the smallest audio cue over the internet to the waiting dubbing engineer.

What is the secret to a successful children's TV theme/score?

I guess it’s the same in any genre of TV or film music; l think there has to be an honesty about it. Certainly with the pre-school TV scores and themes, l get to be really playful and bring out my inner five-year-old, especially when it comes to the title songs. It’s the best fun and l even find a home for my inner prog-rock 20-year-old sometimes too.

For any aspiring children's TV music maker, what would you advise them?

As in any style of music for TV, film or games my view is get know your audience. Research what works for them specifically, then add to that knowledge by watching other examples in that style. A lot. And then by all means throw that knowledge in the bin and follow your instincts (closely followed by what the production company brief says!). At least you’ll understand what it is you’re putting in the bin. Also, I know it sounds boring, cliched and probably downright preachy but really, just be honest in your music. And don’t forget to have fun.

Have you any favourite children's TV scores?

From my childhood The Woodentops followed by Tales of the Riverbank, and from watching with my own children LazyTown, Pingu, Thomas the Tank Engine and Balamory.

What projects are keeping you busy?

There are new Ragdoll Productions pre-school shows in the pipeline but it’s very early days. I am also in an ‘acoustic folk, smart pop’ band/songwriting collective called 3 Bucket Jones with Gitika Partington and we are currently writing/recording our fifth album. We have even been known to play live shows too. Also wrestling with a set of border pipes, an Eigenharp Alpha and, from time to time, the entire Welsh language.