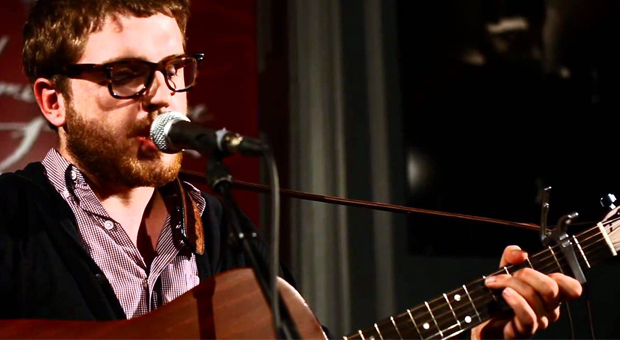 Part of the Communion Records stable, they share close musical genes with the likes of Mumford & Sons and The Staves, combining acoustic guitars and banjos with heartfelt British folk songwriting.

Their phenomenal rise over the last year has today culminated in an Ivor Novello Award nomination in the Best Song Musically and Lyrically category for their song Above the Clouds of Pompeii.

Alongside fellow nominees Hozier and Ben Howard, Bear’s Den songwriter Andrew Davie has been recognised by the songwriting community and his contribution to UK music.

Congratulations for your first ever Ivor Novello Award nomination. How does it feel?
It’s crazy. I’m shocked and honoured to be invited and to be a nominee. I can’t really get my head around it. It’s totally crazy. Today’s the first day I heard about the other two nominees – Ben Howard and Hozier – they’re two records that I absolutely love. They’re great songwriters. My mind is blown to be honest.

How did you write Above the Clouds of Pompeii?
I wrote it a couple of years ago. We were on a Boston to Austin tour in VW Camper vans. It was the first tour of America that Bear’s Den had ever done there. I was finishing off writing it in the back of the van one day and then we tried it out in New York. It had a really different reaction to most of our songs and we’ve been playing it ever since then. It seemed to strike a chord really quickly.

Is that how you like to road test your songs?
Everything is a filter. I have bandmates to tell me what’s good and what’s not so good. But then audiences massively shape our sound – they’re like an extra band member in a way. You kind of figure out song structures from audience reactions and when it comes to record an album, you take all of that in.

Did you write it all in one sitting or did it evolve over time?
It evolved over time. I don’t think I ever really wrote it down. I just had it going on in my head for quite a long time. Towards the end I got my phone out and was going through the notes on there – the random ramblings of a mad man – and that song kind of finished up on there. Then I tried some stuff out with the guys and it seemed to work quite well.

From the outside, it seems as though everything has happened really quickly for you. How does it feel inside the band?
It still feels really quick! But at the same time it’s something we’ve been working towards for a while. We’ve been a band for three years, which isn’t that long. This last year has been absolutely crazy, with the Shepherd’s Bush Empire gig – which was totally unexpected. This nomination is just another thing I can’t get my head around. I find it all really surprising and overwhelming.

Jimmy Napes is here today. Is this the first time you’ve met him?
Yes. He’s amazing! We’ve actually covered Stay With Me by Sam Smith so it’s an honour to finally meet him. There are so many amazing people on the nominees list this year. I’m going to be really starstruck and nervous when it comes to the actual awards day. It’ll be fun!

Do you think you’ll win?
Against Ben Howard and Hozier? No! Those are two amazing songs, and I’ve listened to their albums a lot. I’ve met both of them before and they’re both super lovely guys.

How have you found it in America?
It’s been amazing, we’ve been really lucky. We supported Daughter out there and Mumford & Sons. Doing those shows really helped us to have more of an audience and allowed us to keep going back. We toured America three times last year, twice without an album out – which I think is quite rare for a band – but it’s because we were given these amazing opportunities. We’ve been really fortunate and we just want to tour as much as possible. Our music makes the most sense in that format. Playing live is our thing. And we love America.

What does the rest of the year hold for Bear’s Den?
Festivals! We’re playing Reading and Leeds, and a bunch of other festivals. We’ll be doing a lot of travelling.

Do you have any studio time booked in?
We’re actually in the studio at the moment, trying out some new ideas for the first time in a long time. It’s really exciting to be working on new things. While these songs are really special to us, we’ve been playing them for a while. It’s great to have some new ideas, it’s a fun thing to do.