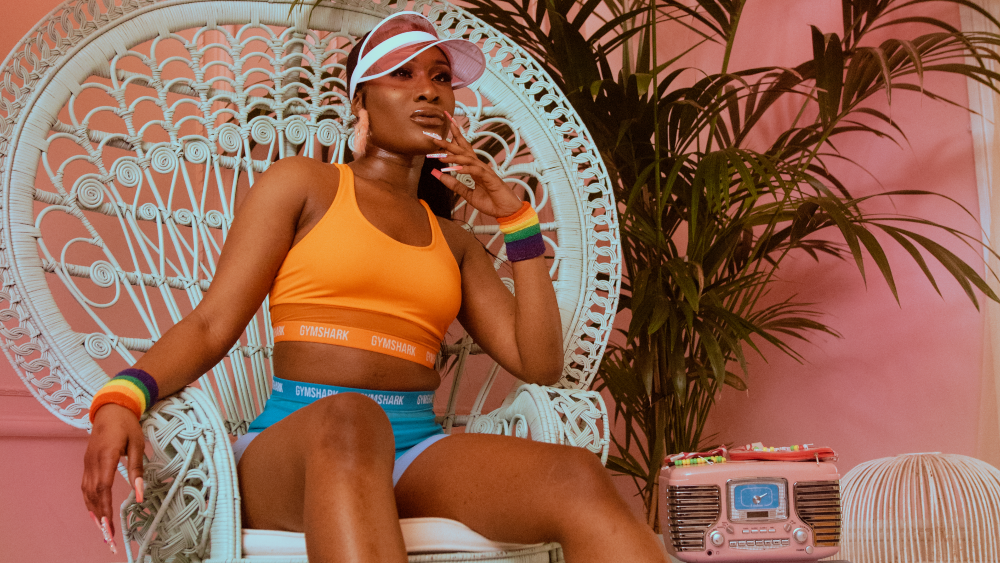 Alicai Harley is an unmistakable talent. Born in Jamaica and raised in south London, Harley has become adept at meshing her sound with British culture and heritage to create tracks flecked with pop-infused dancehall beats and contagious rhythm. A breakthrough hit, the 2017 single Gold saw the multi-talented artist spotlighted for her witty lyrics and festive production. In a few years, Harley has become a star on the rise and The Red Room Intro (Yard Gyal Inna Britain) has cemented her flourishing profile as a UK dance staple.

With Pride Month in full swing and The Red Room Intro (Yard Gyal Inna Britain) available to stream out in the open, Zoya Raza-Sheikh caught up with the creative to chat about the debut release, the importance of Pride, and the trajectory of her career.

Zoya Raza-Sheikh: How do you like to describe your music?

Zoya: You’ve been very expressive about how music has shaped you as an individual and an artist. What role has music played in your life?

Alicai: Music is my therapy. It's something that I love very much. It's a form of expression. After I've finished writing a song, what matters the most is how it's made me feel. There's this burst of happiness that comes from it almost like a workout. It's the same for the genre of music I make as well. I'm always pushing myself to see what I can do next, how can I blend it, or how can I give a raw authentic Jamaican sound blended with a real pop sound. I want the two of them to sound just as powerful as each other and coming together to work.

Zoya: How did your dual upbringing (in Jamaica and London) inspire your artistry?

Alicai: Growing up in London, it has been a journey to get to where I am today. I used to try and fit in a box in terms of what sound I created. I used to feel like I had to be one thing and that's what people would tell me when growing up. I would get asked if I'm a singer or a rapper. I would think what's wrong with these stupid people and why did they say that? I was obviously young at the time and you're telling someone that can blatantly do all these things that they have to choose one your whole life. When I look at it now, I'm like you're a whole hater! At the time, I went through stages of just singing and it was so boring. So then I went through a stage of just rapping. Once I started singing more, I did this first record when I was belting singing and I remember everybody was mind blown. I do both. After a few years of doing different things, I found myself. It made me know that I shouldn't put myself in a box and it's what makes me different as well. I realised that I wasn't gonna hold back and I'm gonna give everything I got and that's how I got here.

'I've realised that I'm a perfectionist and I learned the importance of patience when it comes to your artistry.'

Zoya: Congratulations on the release of The Red Room Intro! Your EP has been well received and praised. How are you now feeling about having your debut out there?

Alicai: I'm still soaking it in and I'm still yet to see the people's reaction to the new records in person. I'm just happy that I put it out and it's not a flop. I put it out, everybody enjoys the songs, and it's a success. This is beyond numbers. I'm talking about how people feel when they listen to my EP, how my friends feel, and when people are communicated about it. I really did what I was supposed to do and that makes me feel happy because it was a long time coming. I feel really grateful. It was a solid body of work and that makes me happy.

Zoya: Did you uncover anything about yourself with making The Red Room?

Alicai: I'm indecisive. If you leave with something for too long, I'm going to think about how it can be greater. It can be a positive, but it can also be a problem. I had the EP mostly finished for so long that coming to the end of it I was thinking it's not good enough. My manager would have to say that each new idea was a new record. I've realised that I'm a perfectionist and I learned the importance of patience when it comes to your artistry. It's down to you, you have the final say, and artists should always have their final say because it's their art. It's not just the music, but the artwork, visuals and all of that.

Zoya: You collaborated with a handful of artists on The Red Room Intro. Do you enjoy the process of collaboration?

Alicai: I don't even think I've collaborated enough. I want to collaborate more and be in the studio with people. When it comes to collaboration, it needs to have a purpose and I think that's the thing why I'm so scared with recording with other people. I can't take somebody being onto me for a record to come out. It scares the life out of me. Do you know how many records that the world would never hear? Just because we've spent all day recording it doesn't mean that it's ready yet. It's scary working with other people sometimes because of the pressure. I do enjoy collaborating, obviously, as you can see from my EP, and I feel like that made sense as well. Those were beautiful collaborations that worked out and none of them felt out a place and everybody killed it.

Zoya: Ahead of your performance at UKBP in 2018, you said: ‘I’m a Jamaican girl that sings dancehall music when dancehall is associated with homophobia’. Can you expand on your meaning behind that statement?

Alicai: I did that interview based on the record Gold. At the time, that was a record that had so much different underlying elements. I've left it quite open because I did the whole 'Gyal you spend to much time whining' and then I did 'Why I spent too much time talking', however, it's me speaking every single time. There was this kind of underlying question of whether I'm speaking to a gal at the start of the song and I did that on purpose. I wanted it to be like that. I wanted it to connect to different people and I wanted to leave room to be self-explanatory. Initially, I was writing it based on a girl, not because of fancying her, but because of admiring and that's what I was talking about. I wanted to put all of these different perspectives in this song. Everybody took what they took from it and that was beautiful.

'What I enjoy the most about Pride is seeing how happy everybody is. I've been to Pride and anybody that has, you see the joy that comes from it.'

Zoya: Do you think the attitudes and inclusivity around dancehall are starting to change?

Alicai: I feel like those genres are changing already. In terms of dancehall, if you go to Jamaica, they're not going to say the majority of the country doesn't have a stigma of being homophobic because they have and it's in their history. For me, my main point has always been that if people are not harming anybody then people should be allowed to live freely and make their own choices. In terms of homophobia, it's based around a culture of hate that people have created to say, 'This is bad'. There's a lot of forced mentality to believe negative stigmas of the LGBTQ+ but once you ask the people saying these negative things, 'How does it affect you when you go home?' it changes. Everybody, in every country, should be allowed to live a happy life and how they choose to live. There's a trend of hatred and you'll see some people okay with two women together, but not two men.

Zoya: You attended Pride before and even performed at LGBTQ+ events. What is your favourite thing about Pride?

Alicai: What I enjoy the most about Pride is seeing how happy everybody is. I've been to Pride and anybody that has, you see the joy that comes from it. It's kind of like Carnival and you don't get that in most places. It's not a festival, but there's a certain joy and carefree happiness going on. It's the joy that comes with people being happy and able to express themselves and be who they are.

Zoya: What have you got planned next?

Alicai: I feel like I've been on a journey in the last couple of months. I got baptised in December. It has really made me want to help people more, especially in regards to mental health. Its become one of my focuses now. I don't know how long it's gonna take me to achieve or prepare, but I know that's my focus. I'm just trying to get myself in the right mind frame of mind so I can do that. One of these ideas is a charity surrounding therapy because therapy is really expensive. Money shouldn't be the reason our mental health suffers, so that's one thing I want to put into place. I've also got shows coming up and quite a few festivals coming up this year too. In terms of my musical journey, we'll see where that takes us. It's changing a little bit and the truth of what is on my heart is creating that. It's creating resources to help and once I do that I'll start caring about other things.

Stay up to date with Alicai Harley.