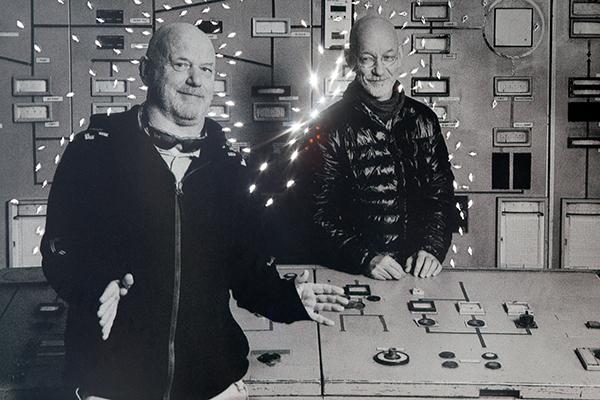 'We built our own little box that we live in': Alex Paterson on his 25-plus years in The Orb...

Space cadet Alex Paterson (left) has been skirting around the outer edges of dance music since the late eighties at the helm of shape-shifting mind-benders The Orb.

From ear-meltingly weird DJ sets at London club Heaven to free parties across the world, The Orb's dubbed out vibes altered the notion of hedonism and rebellion in electronic music.

Starting out as a committed punk and roadie for Killing Joke, Alex soon graduated onto a diet of euphoric house music and dirty dub. It was these influences that went on to feed the pulsating pyschedelia of The Orb’s 1991 debut record Adventures Beyond the Ultraworld.

The two-hour trip set him on a course he's still navigating 25 years – and many notable collaborations – later.

On the eve of the release of The Orb's new instalment for Kompact, Moonbuilding 2703 AD, we chat to Alex about working with everyone from David Gilmour to Lee Scratch Perry, and the concept behind the new LP…

Moonbuilding 2703 AD has been described as a concept album – can you tell me more about the impetus behind it?
The word ‘conceptual’ has definitely come out again! I suppose it is conceptual – it’s an album about the future or the past or the present… Take your pick!

What triggered off the process?
The inspiration came from a book I was reading called Who Built the Moon? It was originally going to be an experimental piece of opera. It was around the time of the last general election five years ago, when the Conservatives came in, ostracised everybody and made them really poor – I think austerity is the word I’m looking for. They put through a load of budget cuts and one affected us.

We were working on an opera with the Covent Garden Opera House for a series of shows they were doing called Opera Shots. It was about using modern artists to explain what they thought classical music should be, which was really interesting. But the Tories came along and cut their budget so it couldn’t go ahead.

How has it changed since that original idea?
There's more of a dark, dancey, atmospheric feel to the whole thing. Originally, it was an opera with a conception behind it... Moonbuilding for me is basically a modern day Romeo and Juliette. Ha! It gets even weirder! The earth and the moon are locked in a big love pattern that’s been going on endlessly. Some cultures would say it’s just a planet going round another planet but it’s quite simple – the moon is an incubator and without it we wouldn’t have the earth. This is the reality, all I’m doing is something that’s fantasy. 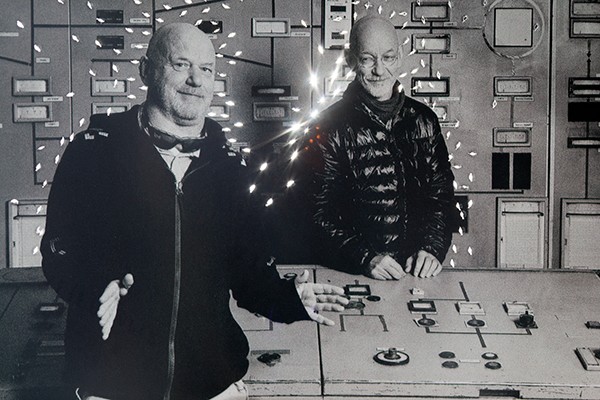 Do you always need to have a grand idea to get you going?
No, not normally. It’s just that this started life as an opera as opposed to music you’d put out on a piece of vinyl. Its true potential will never be realised.

Did any new technologies or working methods inspire the album?
Over the last five years we’ve really refined how we work. Thomas [Fehlmann, top picture, right] and myself tend to be able to do things quite spontaneously together without any stress. It all comes out quite naturally these days. We’re mature old men who enjoy doing music - not angry young men who want to get their point across and don’t like the other person’s point of view because it’s not theirs! I think we’ve grown up a bit.

You’ve collaborated really widely throughout your career. Is that an important part of the music-making process for you or are you happy to sit on your own and make stuff?
I like to do things with others and if I’m not doing something with Thomas then I’m working with different people. I enjoy the banter. Working alone is not something I’ve ever thought about doing. In many ways, I did the first album on my own because nobody was bothered about what I was doing. When it was successful, suddenly people had opinions about what The Orb should be. I’ve managed to keep that to myself in many ways so I’m still doing a lot of things by myself although I’m not on my own.

What was it like to work with Lee Perry?
Insane. We had a brand new idea of what we wanted to do, but where was the brass section? Where was the real bass player? Why weren’t we doing real reggae music? The answer was - we were and we weren’t. We were trying to develop it into another sound and Lee completely got it. For a 76 year old, he really got his head around it.

It sounds like an equal record, with a good representation of both of you in there. Was there a lot of give and take on both sides?
Yes indeed, there was a lot of compromise in the end. It wasn’t all plain sailing that’s for sure. But at the end of the day, working with Dave Gilmour wasn’t exactly plain sailing either. Given the choice, I’d prefer to work with Lee Scratch Perry any day.

Has Lee Perry still got a thirst for music?
He’s got a thirst for life. If I had that energy at his age then I’d be a very proud and happy man. It’s something that goes with the territory. It’s about his persona and who he is. Creatively, there’s a spark that flows through him. He’s a character, there’s no doubt. He likes to sound people out, and he’s not called The Upsetter for nothing!

How do you think British dance music culture has evolved since the early days of The Orb?
There doesn’t seem to be many characters around anymore, and if they are they’re pretty preconceived. Everyone is looking for the next big thing. We had a bit of that with The Orb at the end of the eighties when journalists were running round looking for the new thing for the nineties. Because I was doing something weird at the Land of Oz [club night at Heaven, London] in 1989, the press jumped on us. We jumped off the pedestal because we knew where it was going – we’d be finished within two years if we’d have gone mainstream. We wanted to see the world and do many things – not just put an album out every five years, like your Chemical Brothers, your Underworlds and your Massive Attacks.

How do you feel about the live performance side of what you do?
My life has been spent on the road. I know what I like and I like what I know, and one of the things I do love is playing music live. We need to have a constant source of music to do that, so we need to keep putting out albums. We’ve been locked into that process for over 20 years. I don’t see it as another alternative, I see it as a really good way to avoid having a day job! What else do you want me to do? And if people are still interested in us, then aren’t we the lucky ones?

Do you rely on your laptop when you’re gigging or are you more about the hardware and analogue kit?
We’ve built our own little box that we live in. We never talk to the audience, never have done, and probably never will. We have samples galore that will talk to the audience.