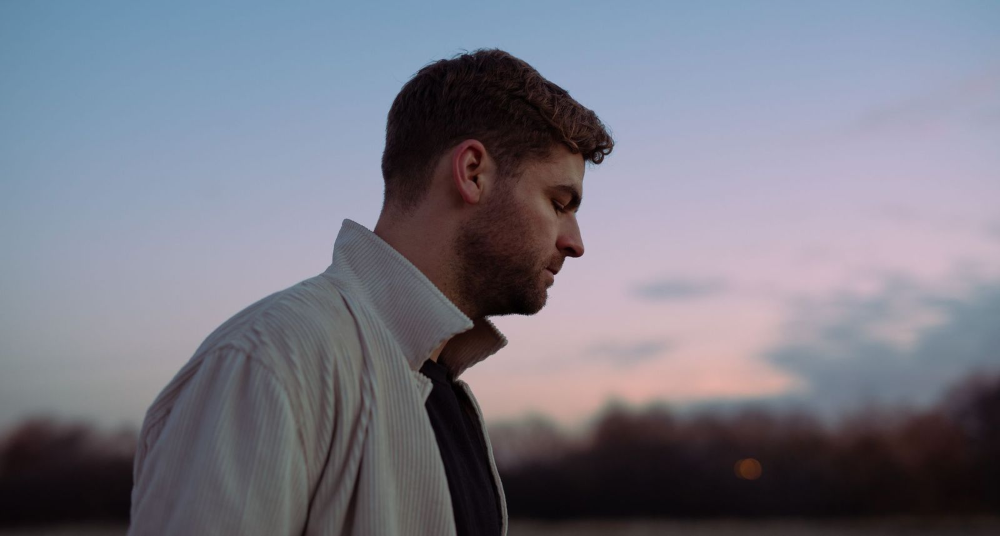 Fran O’Hanlon acquired the name AJIMAL in the aftermath of the 2010 Haiti earthquake. A doctor by day, Fran was working in a field hospital when he found himself in the presence of a voodoo priest from whom he would later derive the moniker.

Hailing from Newcastle, O’Hanlon qualified as a doctor whilst recording his first album, Childhood, and he continues to practise alongside his musical career.

Over the last ten years, Fran has played alongside the likes of Kathryn Joseph, Lucy Rose, Loney Dear, Lanterns on the Lake, The 1975 and Nadine Shah, with performances that are renowned for their intimacy and intensity.

More recently, AJIMAL came second in the Glastonbury Emerging Talent competition 2020, winning a slot at the 2021 festival in addition to a £2,500 PRS Foundation Talent Development prize.

AJIMAL's second album, As It Grows Dark / Light, is out now. You can listen to it in full below.

We caught up with Fran following his album launch live stream on Sunday 5 July.

Hi Fran! Thanks for taking the time to speak to us. Where are you in the world right now?

Hello! Thanks for having me. I am sitting in my room, having recently returned from dragging myself round the park for a run.

How have you been coping with the lockdown?

It's actually been quite a busy time. I've just released an album so have spent quite a lot of time over the past months planning the campaign and building up to it. It's been a while in the pipeline so I'm very glad it's finally here. Lockdown has been a strange time so far, for sure, but taking a break from computer screens every so often to go outside and enjoy the sun has definitely been helpful in staying sane.

What are your golden rules for staying creative in isolation?

I definitely can't claim to have cracked it. Some people seem to really thrive off it. I remember that first Bon Iver album was born out of a self-imposed isolation and it turned out masterfully, but now facing isolation more or less as a whole planet and watching everything grind to a halt has obviously been really weird. I've managed to learn some new skills through necessity. I made a music video and recorded a couple of live sessions in my living room, so I had to figure out how to edit and colour grade the footage. It's forcing us to be creative in ways that sometimes feel a bit alien, but that's not necessarily a bad thing.

'They are quite distinct careers, but actually, over the last couple of years, I've realised that there are also a lot of ways in which they overlap and I've become much more certain that they're both integral to who I am.'

You’ve been working in hospitals as a doctor throughout the pandemic. How have you managed to balance such a demanding job with your music career?

Yeah, they are quite distinct careers, but actually, over the last couple of years, I've realised that there are also a lot of ways in which they overlap and I've become much more certain that they're both integral to who I am, so finding a way for them to co-exist is important. I work part-time and across different hospitals covering gaps in the rota, which gives me much more flexibility to take time off to record and tour. Without that flexibility, I don't think it would be possible.

Do you ever find that that side of your life ever merges with the music you make?

You meet a lot of people working in hospital and listening to their stories is a big part of the job. It's often at quite significant moments in their lives. I sometimes scribble down little lines that I hear, if there's a particular turn of phrase that sticks in my mind then that might be a starting point for sitting down with a musical idea. Hospitals are pretty musical places in themselves. There's so many sounds - beeps, buzzes, clangs, drips, splashes, alarms, accents, languages - you learn pretty quickly to tune out to most of them and which ones need to jolt you into action, but I remember accompanying a patient for an MRI scan and finding the musicality of the scanner as it beeped and whirred really beautiful. I haven't sampled one yet but it's not out of the question.

Your live performances are known in part for their intensity. Have you found you’ve been able to translate that energy into the live streamed shows you've hosted/taken part in?

I was pretty slow off the mark with streaming. I've heard various people say that streaming is here to stay, regardless of what happens with Covid. One thing I really like about it is the ability to connect with people all over the planet, who otherwise wouldn't be able to see me play. Similarly, I've seen some really beautiful intimate live performances that I never would have witnessed otherwise - there's an intimacy to them when they're broadcast from someone's home so they feel very personal. I just recorded an album launch in a beautiful church - it was weird doing the show without an audience in the room - I obviously would have loved to make it a big celebration with lots of people, but I actually think it has turned into something really special too and it's the best we have until we can pack into rooms together again!

'I remember accompanying a patient for an MRI scan and finding the musicality of the scanner as it beeped and whirred really beautiful. I haven't sampled one yet but it's not out of the question.'

Congratulations on taking second place in the Glastonbury Emerging Talent competition! How does it feel to know you’ll be playing there in 2021?

Thank you! Still absolutely, entirely surreal. Perhaps more so for the fact that the festival is still a year away. I've got a list of venues and festivals I'd love to play and Glasto has been right at the top for as long as I can remember, so I can't wait to be there. I'd entered the ETC a few times and made the longlist once before but it came as an amazing surprise to be offered a chance to play. I think it's always worth trying to enter things like that, even if you don't feel like you have a chance at winning.

Have you thought about what you’re going to do with the Talent Development Prize?

I'm piecing together ideas for my next album and trying to get my foot in the door to do more scoring and composing work, so there are some little bits of equipment I want to buy or upgrade to be able to shape new ideas. I also have a rehearsal / writing space, so it'll help me cover the costs of renting that, which is brilliant. The creative industries are so important to us as a society but it's always a struggle financially, so it's brilliant to have organisations like PRS and PRSF supporting initiatives like this.

'The vulnerability of the arts and live music sector has definitely been exposed by Covid so it's good that we're talking about it and pushing for change.'

Can you tell us a bit about your new album, As It Grows Dark / Light?

Of course! It's an album that's been about five years in the making and came about as a collaboration with Guy Massey (The Beatles, Spiritualized, Bill Fay, Ed Sheeran). I had the opportunity to record with him at AIR studios thanks to another competition (always worth entering) and we hit it off and started sending ideas back and forth, working on the album in little bits of spare time. It meant that it took much longer to make than most albums, but actually it also gave us time away from the songs to then come back to them fresh, which I think was really good for the album as a whole. Musically and lyrically, the album explores the ideas of fear and wonderment and the title popped into my head as I was falling asleep. I liked the idea of it capturing both of those themes.

What has it been like to release an album under such strange circumstances?

It's obviously quite different from the normal release schedule; I can’t tour, I can’t do in-person promo and music venues are closed with no clear schedule to re-open, as yet. The album was originally planned to come out in April and was then pushed back to June. At a certain point, you just have to go for it - people still want to hear new music and there are lots of things happening now that resonate with the themes of the album. Another positive thing has been the #BrokenRecord campaign pushing for fairer pay for songwriters in the streaming era. The vulnerability of the arts and live music sector has definitely been exposed by Covid so it's good that we're talking about it and pushing for change.

What’s next for you in 2020, coronavirus permitting?

I'm obviously really looking forward to being able to go out and play music in front of people again but in the meantime, I'm gathering ideas for my next album and still working in hospital too, so 2020 doesn't look like it's getting dull anytime soon.