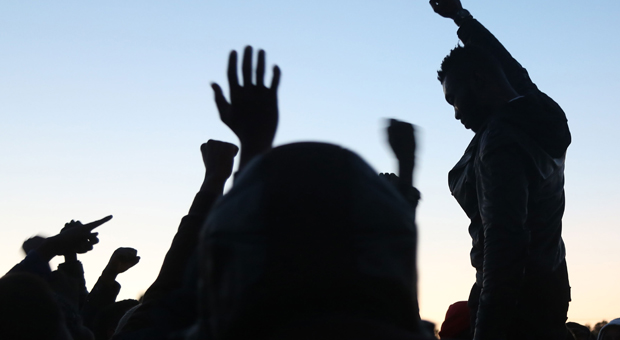 Afro-grime MC Afrikan Boy gives us the skinny on Border Business, his single standing up for refugees, and performing in Calais camp, The Jungle…

As everyone knows, 2015 has been a year of whirling political turmoil in the UK, Europe and in the Middle East where unrest has increased over recent months.

While growing numbers of artists are now using these political topics as springboards for music, Afro-grime MC Afrikan Boy has been fully immersed in the refugee crisis for some time, with his single Border Business outlining his feelings and personal experience of ongoing immigration issues he’s seen while growing up in South London.

He recently visited the refugee camp in Calais France, nicknamed The Jungle, along with Secret Cinema to perform a gig for those there.

This recent work tops off a very busy 12 months for Afrikan Boy with the release of his debut album The ABCD, a MOBO nod for Best African Act and his involvement in One Day I Went to *idl, a play based around his first viral hit of the same name, premièred in Berlin back in the summer. We quizzed the MC and songwriter to find out about his experiences in France and why the spirit of the protest is alive and well…

Where did the idea for the Border Business project come about?

Border Business was a protest song I wrote back in 2009 and came out while I was still studying. It was about migration, using that as a metaphor to explore what it’s like to be a foreigner, you’re in a country where you can’t even live to survive, you’re so broke you can’t even pay attention to what’s going on around you.

Having seen the impact of migration in my community and my family growing up, the song was about expressing the stories of those people who made it across from Africa. The protest elements speak about unrest, voting for democracy, people bringing guns to their voting conventions. Although alien to me, I knew these things were happening across the world. I put myself in that perspective to tell that story.

What inspired the trip to Calais?

The project to go to Calais was something we really dreamed about. A day before we were going to do a show in Calais, it was then we got the invite. I’d never been to anything like that before. It was very enlightening to learn the real human stories behind those living there, trying to get to the UK.

What was it like when you got to the camp? Were you surprised by the conditions?

I wasn’t taken aback but now winter is here, some people have been there for months, people are sleeping in donated tents. The weather’s getting worse and there’s no indoor place for them to shelter.

When you walk around, there’s a kind of community, people walking around with their pots and pans, washing products, shampooing their hair, living their everyday lives. People trying to get on with what they have, people playing football. It was humbling that they’d invite me in and make me feel so welcome.

It was weird. I was like this feels like Africa but with European air. It’s shocking how open these camps are. There isn’t any security. Anyone can walk in there.

How did the gig go down?

It took a while for them to get warmed up but I think a lot of the brothers there connected with me, because of the way I related to them, using some Arabic and Sudanese slang terms.

They’re getting a lot of folk singers visit so for them to have a black brother, Afrikan Boy, coming in from London, speaking a little bit of their language, it fired everyone up. Eventually, everyone just started breaking down, they were shocking out, giving me the bogle, giving me everything.

It was really humbling and showed me once again the power of music to uplift you from your current situation. It was a very humbling experience and a lot of my lyrics that I’d written from their perspective, I was able to perform. It was very empowering to see my music live, and take me to this place where my lyrics were the reality.

Do you think music can have a positive impact in situations like this?

Definitely. If someone is having a bad day, you play a certain type of music and it lifts you. It definitely has a positive impact, in getting ideas out there that challenge a certain ideology. The same way words hold a lot of power, mixing music in doubles the impact to challenge. Even to push questions in front of the public and make them think and ask themselves about what is going on.

Are you optimistic about the world we live in?

The people looking to get over are the optimistic ones. Everyday they try to get on this train even though the night before they got stopped. They are optimistic and that impacts me. But this situation has been going on for time man.

I was there to look at the human story behind this, I was in Germany working with the migrant community over there doing a theatre production called one day I want to live, telling the stories of these people. They’ve still got human stories, stories that compel them to be in this situation that they’re at. It’s important to look at everyone as individuals, not tarnish everyone as an undercover fighter or an economic migrant. You don’t know where these people are coming from, if you were in their shoes, sleeping on a boat for eight days, having to sleep standing up, shit in the water, on a boat that’s meant for 20 people but with 60 on it, people don’t even want to put themselves in that position. I ask what compels them to do this. The political reasons are obvious but there’s this human side. They’re optimistic, they just want to better their lives. And the situation is not going away.

Watch the video for Border Business below.