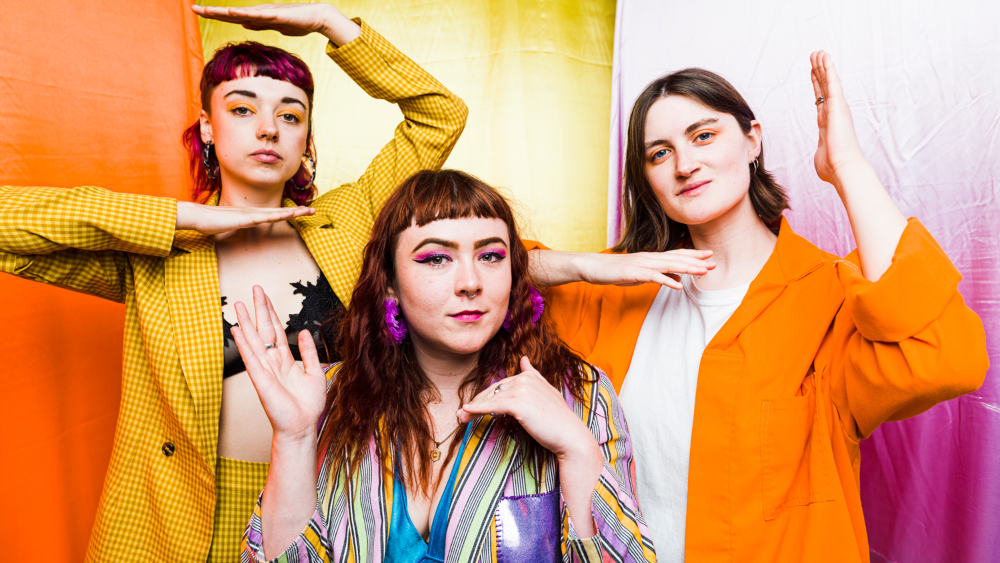 It would be a waste of our reach, not to talk about things that matter to us': to celebrate Welsh Language Music Day we caught up with post-punk trio Adwaith…

Fittingly, the Welsh language trio’s name translates to ‘reaction,’ which is something they’ve been attracting since they formed in their hometown of Camarthen in 2015.

Hollie, Gwenllian Anthony and Heledd Owen released their debut long-player Melyn in 2018, and it subsequently fought off competition from established acts like Cate Le Bon to take home the Welsh Music Prize in 2019.

Although ostensibly a post-punk record, Melyn is musically rich beyond genre confines and shines with a natural lyricism.

That they sing in Welsh does little to dampen to connection that an increasing fanbase are making with the group.

And they are just one of an increasing amount of Welsh artists singing in their mother tongue with success both inside and outside of Wales, including Gruff Rhys and Gwenno.

To celebrate Welsh Language Music Day, we caught up with Hollie and Gwenllian to find out what inspires them to sing in their native language, what their take is on the music scene in Wales and more…

What was the initial motivation behind ADWAITH being a Welsh language band?

Gwenllian: I think, especially in our town Camarthen, there was a big Welsh language music scene. The first bands we got into and went to see live were all Welsh language. It was a very natural progression for us to want to get involved with it too.

How does the songwriting process work between the three of you?

Hollie: It varies to be honest, it can start with a riff or a drum beat, then sometimes we write stuff individually and bring stuff to the group. It really depends. We all share the writing responsibilities and we all produce stuff.

Gwenllian: The lyrics are quite collaborative. Sometimes we have a full song with lyrics written by one of us, but some of it we just have a discussion and write it between us.

Did you ever worry that singing primarily in Welsh might hinder you career?

Gwenllian: When we first started making music we just saw it as something we did for fun, but it’s all progressed really amazingly. I don’t think a career is something that we thought about. A few years later and its all kicking off.

I think a lot of what makes it stand out, especially outside Wales, is the fact that we sing in Welsh, our mother tongue. It’s never something that we thought about really. We often get asked, ‘when are you going to do English songs?’ We have released some English songs, but that’s not us as a band, I don’t think.

Do you see it very much as part of your identity as a band?

Hollie: Yes, very much. That’s what a lot of people love about us as a band. We’re definitely keeping it Welsh, forever.

Do you ever find that it acts as a barrier for some non-Welsh speakers or have people generally embraced it?

Hollie: I feel like when we play outside of Wales the response is great. When we played in London last some guy came up to us and said, ‘you’ve really inspired me to learn Welsh.’ The reaction to it, surprisingly, is amazing.

Gwenllian: I think we get a better reaction out side of Wales a lot of the time. I don’t know if that’s because people are kind of used to the Welsh language in Wales. A lot of people were brought up thinking that it wasn’t cool to speak Welsh. I guess some people have that mentality and feel like they don’t understand it. People outside of Wales don’t have that relationship with the language. We definitely get a nicer reaction outside of Wales.

In recent years acts like Cate Le Bon, Gwenno and Gruff Rhys, among others, have paved the foundations for a strong Welsh language music scene. Does it feel to you like the tide is turning?

Gwenllian: I think over the last few decades it’s been difficult to push Welsh language music outside of Wales. We have Super Furry Animals, obviously, and Gorky’s (Zygotic Mynci), but it is sometimes still a struggle. But Gruff Rhys did open up the door to all the other bands in Wales, which was amazing.

Is it important to you to promote the Welsh language with your music?

I think Welsh artists are overlooked and I don’t feel like their subscribing to a scene. We get a lot of different genres and different experimental music. People in Wales are creating the kind of music they want to.

Hollie: What’s great about Welsh musicians is how experimental they are.

Gwenllian: They don’t feel like they need to be a certain way. Everyone’s very spread out and quite individual, which is cool.

Do you think music helps to encourage people to learn the language?

Hollie: I feel that, like people outside of Wales, people inside of Wales don’t really know the Welsh language. I want them to be curious and try and pick up the language. There’s definitely something great about Welsh language music, translating it and learning it.

More generally speaking, what’s your take on the Welsh music scene at the moment?

Hollie: Pyst, a Welsh distribution based in Cardiff, they’ve been putting on loads of Welsh language gigs and tours around the UK and the reaction to those tours has been amazing. You don’t think people will turn up, because no one really knows who we are, but there’s always such a scene and people are really supportive. So, I think the scene is changing.

Last year you followed in Gwenno and Gruff’s footsteps and picked up the Welsh Music prize – what did it mean to be recognised like that?

Hollie: It felt really crazy to be honest.

Gwenllian: Yeah, we wrote some of those songs when we were like 16, 17 and we didn’t play them live bit revisited them for the album. It’s mad to think that people connected with them so much. We never thought they would have that kind of reach, but it’s been great.

What was the process of recording your debut like and what was the thinking behind it?

Gwenllian: We recorded most of it in a week in mid-Wales, but we also had some singles that we recorded before that we popped in there as well. The album is all about growing up, finding your way as people and growing up. so I guess the album is a reflection of our journey as people.

Hollie: We worked with producer Steffan Pringle – he’s great – he’s produced all of our stuff from the start and still does today. He completely gets our sound and helped massively with the album.

Gwenllian: I don’t know if there’s a musical inspiration because we all like different things and we’re inspired by little things from different bands.

Hollie: I wouldn’t say that we have a band that we idolise and inspire to be like. We get inspired by people we meet. We’ve written songs about people we meet, things that piss us off, things that matter to us – that’s what we write about and what inspires us.

Gwenllian: We are recording a second album in the summer, so we’re writing that now – that’ll be out before Christmas. Very exciting.

Hollie: We’ve got lots of gigs lined up.

Gwenllian: Yeah, we’re going to Russia next month, which is…

As a band do you think you’re most at home in the studio or playing live?

Hollie: I feel like in the studio. We love playing live, it’s so much fun, but in the studio you can do so much more. You can play around with different sounds, but with just three of us, there’s only so much you can do onstage.

Will you be doing anything to celebrate Welsh Language Music Day?

Melyn is out now via Libertino Records.