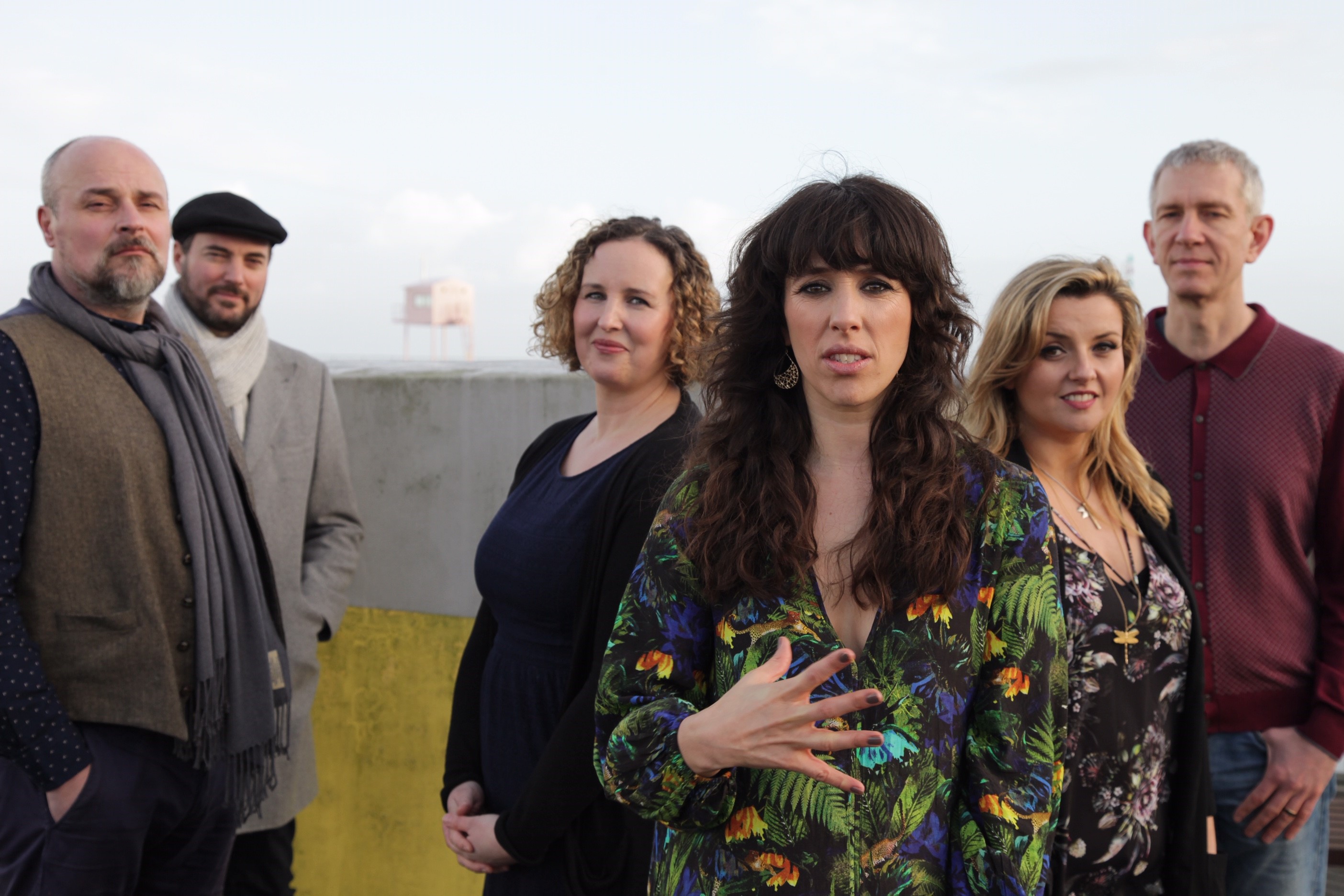 ‘Folk music is in a terrible state. I think there’re too many people who think they’re custodians of it,’ says 9Bach’s Martin Hoyland.

‘Folk music is in a terrible state. I think there’re too many people who think they’re custodians of it,’ says 9Bach’s Martin Hoyland.

In 2009 9Bach released their self-titled debut, which recast traditional Welsh folk songs for the 21st century.

Emboldened by what they had created – despite the grumbling of some traditionalists perturbed by the inclusion of trip hop beats – their next record was comprised of original compositions.

Retaining a commitment to singing in Welsh, the band subsequently weaved in Welsh harp with guitar and a subtle use of electronics to their follow up Tincian, thus honouring the past and embracing the future.

They continued on a progressive path for their third record Anian incorporating Middle Eastern rhythms and psych influences.

Now 9Bach are set to embark on another fresh adventure for PRS Foundation’s New Music Biennial.

In Your Voice (Yn dy Lais) will see the band collaborate with actor Maxine Peake and Portishead’s Andy Gangadeen for a 15-minute genre defying, multi-media piece.

Here we chat to Martin about the motivations behind their new work, the folk music scene and future projects…

How did your collaboration with Maxine Peake and Andy Gangadeen come about?
Crikey, where do you start with that one? On our last album we did something called In Your Voice. What we tried to do was something for a non-Welsh language audience. Some bands do translations to their songs, but it’s really hard to do. So, we came up with the idea of doing interpretations instead, and we thought, why not create something else? Rather than just printing translated lyrics on the album, create something new.

So, we did this thing call In Your Voice and it was interpretations of all the songs. We got different people to do each one, different writers and performers. One of them, a writer called Chloe Moss wrote one and we asked Maxine if she would perform it.

She saw us when we played out first ever gig at Green Man festival, and we kind of kept in contact with her since then. When this project came about we thought we’d extend the idea of that and do the whole singing in Welsh with English interpretations – just do it in one song. So that was that side of it, she was up for it.

Then working with Andy, for a while now we’ve been looking at changing our sound a bit and doing something electronic. Getting this project allowed us to do that and gave us space to try that. We were friends with Andy through our manager and I was talking to him about the ideas and he was excited by it. When we came across this project, he was the logical person to ask and he was bang up for doing it.

What’s the thinking behind In Your Voice (Yn dy Lais)?
Sonically – and this was Andy’s idea – the tricky bit was that it’s a 15-minute piece. We decided early on, because the option was doing three five-minute songs, but we decided early on that we’d go for the challenge of doing just one piece. Andy said, “let’s approach it like a classical music piece.” So we got three different movements and time signature changes and stuff like that. Sonically, really we were just trying to add to the 9Bach sound with some synths and electronics. So instead of having an acoustic drum kit it’s an electronic drum kit and there’s some synths holding the rhythm.

What do you hope audiences take away from it?
I suppose, at first, a good introduction to 9Bach. I guess part of the idea behind doing things is a) to challenge yourself, for starters, but b) to engage the audiences. Hopefully people will get an idea of 9Bach and of the Welsh language. It’s been difficult for us, because we sing in Welsh, we haven’t been able to open as many doors than if we sang in English. So hopefully people will come away and see that singing in Welsh is not a barrier to our music.

And the power of collaborating within creative arts should be open to experimentation. And you can do different things and it’s valid, because people think in boxes, don’t they? The three-and-a-half-minute pop song and that’s it. There’re so many ways you can approach things

How important are initiatives like the New Music Biennial in supporting new work in the UK?
I think it’s a must really. To find a career in music anyway, as I mentioned before, to create a three-and-a-half-minute pop song, or whatever, it’s hard enough to sustain a career within those boundaries anyway. If I went through my record company or my manager and said I wanted to do a 15-minute piece of music [laughs] they wouldn’t be as excited about it as we are, ha!

But I think you can still create something valid, but again, it’s outside of the norm of what the industry expects. Anything like that, I’m sure when Queen did Bohemian Rhapsody the people around them were like, “you must be crazy.” But I think doing things like that can challenge an audience and hopefully change perceptions of what art can be.

But then Gwenno’s had success singing in Welsh and Cornish, that’s raised awareness, Cate le Bon sang in Welsh when she first started. Gruff (Rhys Jones) sings in Welsh, does bilingual albums, sometimes English only, sometimes Welsh only.

Your music combines Welsh folk traditions with contemporary influences. Is it important that folk music evolves in order to keep it alive?
I think it’s essential. Folk music is in a terrible state. I think there’re too many people who think they’re custodians of it. I think there’s too many people who say, “you can’t do it like that.” It seems to be consistently an eternal battle between people who think that tradition is tradition and past the 1900s we’re not allowed to evolve the music anymore.

It seems strange to me that folk music first thrived and emerged by people hearing a song in a different village, taking it to their village and changing it. And now it seems, especially in Wales, people are very of the opinion, “you can’t do that like that, that’s not proper folk music.” It’s a folk song. To be fair, our last few albums are mainly self-written, we used to do the odd folk songs. I think the folk world seems to be populated by a very old audience. To bring in younger audiences there needs to be more exciting developments really.

What inspired you to acoustically revisit songs from Anian and Tincian for your latest EP Noeth?
I can’t remember [laughs]. I me and Lisa were just mucking around with something, maybe we were going to do an acoustic gig or something like that, working out an arrangement for one of the songs – and when we came up with the arrangement it was like a different song. We found it interesting that there’s that scope for it being the same song, but it sounds loads different. We found that interesting and though, why not just do an EP?

It’s a busy year for you, you’re also rereleasing your debut in August. What has revisiting that record been like?
Interesting because, again, they’re all folk songs on that album, but they don’t sound like folk songs. A lot of them don’t anyway, just because of the way they’re arranged musically. I suppose a lot of people would say, it’s not folk music, sonically and because of the way it’s arranged – quite heavy drum & bass. But they are folk songs. I suppose that’s the question, what makes a folk song a folk song? I don’t really have the answer. I’m a rock musician really, that’s my background. I just happened to make an album full of folk songs [laughs]. I think if the folk thing is going to thrive, it needs to be more open and more accepting.

How do you think your music has evolved since then?
For a while now we’ve been wanting to make another change and we’re going to do that on the next album, so I think it’s reaffirmed that, this project’s helped with that. We want to add a more electronic, upbeat slant to what we already do. In a way, putting this album out was a kind of goodbye to what we used to be and now we’re going to move on.

The New Music Biennial is also kind of putting down a marker for what comes next. We’d like to carry on collaborating with Andy.

Beyond the tour, what’s next for 9Bach?
More touring in 2020 and writing and recording the next album for release in 2021.

We’ll expect something very different from you then…
Fingers crossed! [laughs]. I’ve said it now, so it will have to be [laughs].