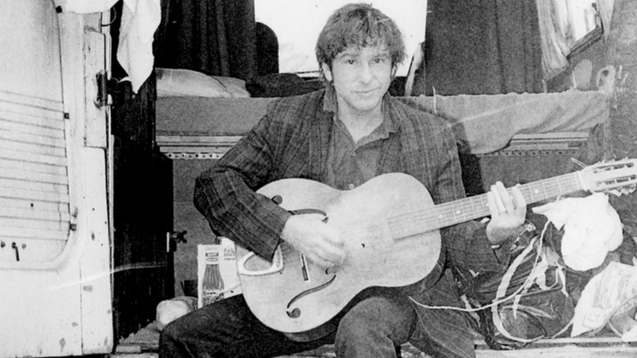 Eric Goulden is Wreckless Eric, a singer and songwriter who has enjoyed almost 40 years as the self-confessed biggest name in the UK’s underground scene. We find out how he wrote his most loved song (I'd Go The) Whole Wide World.

Eric Goulden is Wreckless Eric, a singer and songwriter who has enjoyed almost 40 years as the self-confessed biggest name in the UK’s underground scene. After releasing (I'd Go The) Whole Wide World in the late seventies, the song went on to become a cult favourite while he continued writing, recording and releasing alternative pop across a variety of guises. He now lives in upstate New York and has just released AmERICa, his first LP in almost a decade. We find out how he wrote his most loved song…

It was about 1974. I was 19, an art student living in Hull. I was going out with this girl - I wanted to finish it but it was difficult. One evening I went for a walk through Hull. I had this idea rolling around my head. I was trying to write songs and scribbled this idea on an envelope. I had a couple of ideas for verses and decided to go home and finish it. By the time I got back I decided I could do it with just two chords. Can you write a song with two chords? I didn’t know if I was allowed. But when I got home the girlfriend was waiting. I just wanted to rush upstairs and finish the song. She was going, ‘you don’t care do you?’ I sang, ‘I’ve got the whole wide world, I’ve got the whole wide world.’ ‘Are you listening to a word I’m saying?’ While I was writing the song, I think we split up.

I wasn’t too bothered. I’d got the song and played it to a few people. They were like, ‘what’s that? It’s only got two chords and it goes out of time.’ But it sounded all right to me. I really wanted to write songs like Kevin Ayres, like Clarence in Wonderland. But this is the great thing about being young. You’re so secure in your own ineptness. As you get older you question the quality more.

I left art school in 1976 and moved to London. Stiff Records had just started. They did an interview with Melody Maker and I thought they sounded great. At the time I’d been to audition in bands but it was always the poncy guy who got the job. I dunno if they had rich parents or what but they always had better equipment. With all the bands I played in, everything was either homemade or stolen.

I gave Stiff Records a tape with the song on and the number of the pay phone in the hallway where I lived. I was anguishing about giving them the tape. ‘Oh god they’re laughing at me’. But the next day the phone rang and it was Stiff. They asked me whether I wanted to make a record.

We recorded it with Nick Lowe and Steve Goulding. I could barely plug in my guitar I was so nervous. I still see Steve and he takes the piss out of me for the way I played on the session.

We did the backing track quickly. Nick on guitar, Steve on drums, then Nick put the bass in. We recorded it at Halfway Studios in Islington. It’s a car and exhaust place now - it’s really sad. It was a great studio, there was a real sound to it. I was fine being the frontman but it was better when I was in Hull. Stiff Records weren’t that young and cynical. Being cynical was what you had to be then - but it’s such a fucking waste of time.

It’s funny that the record was made surrounded by such cynicism yet people play it at weddings. I’ve been offered vast sums of money to play while people propose. I always turn that shit down. One guy said ‘I want you to be behind this screen in this restaurant while I propose to my girlfriend - then I want you to come out and play Whole Wide World’. That would be terrible wouldn’t it?

I’m not surprised by its success. But I don’t look at it that way. It’s just me and two chords. Loads of people have covered it but no one’s ever come up to the strength of that original version. People ask whether I get tired of playing it. But I don’t. When you’re a kid you’d dream of this. It might not have been top ten but there’s thousands of top ten hits that have disappeared and it’s endured. When I get to play that song the enthusiasm of the audience will always buoy me up. I never want to mess with it.

Read our previous interview with Eric about his new album, AmERICa via Fire Records.
Features
Back to top