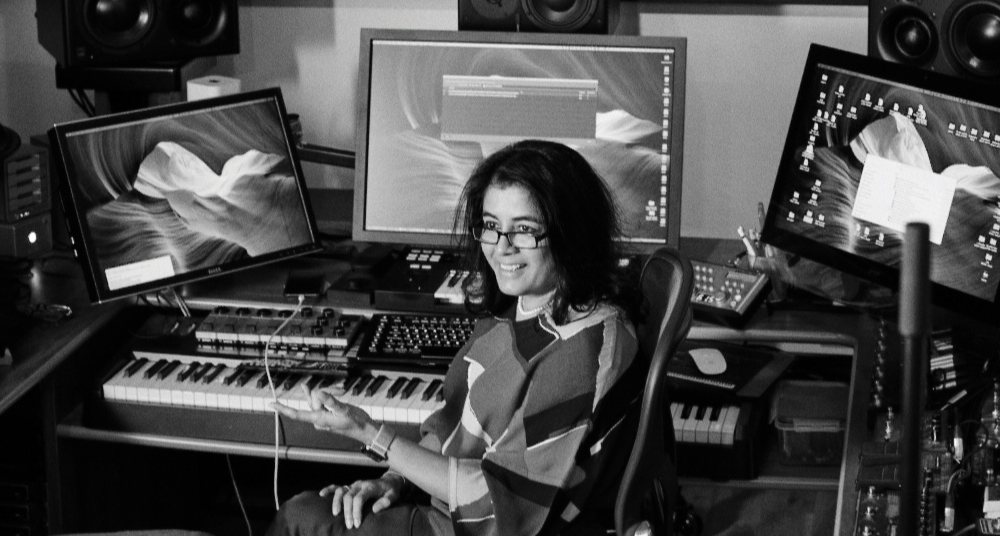 I Wrote That: Nainita Desai - For Sama

‘Sitting in the Cannes cinema, seeing women and grown men crying around me, was the moment I realised that we had gone down the right path in trying to reach and connect with people. Seeing them respond to the film in such a strong emotional way was total validation for all the work we had put in.’

Multi-award winning media composer Nainita Desai has been nominated for an Ivor Novello for her score for documentary film For Sama.

In the early stages of her career, Nainita Desai worked with the director Werner Herzog, then secured a role at Peter Gabriel’s Real World Studios before making a name for herself initially for documentaries, and later feature films like the supernatural thriller Darkness Visible. She has since scored countless BAFTA, Oscar, Emmy acclaimed productions and in 2018, was named one of PRS for Music's top female TV and film writers.

As part of PRS for Music’s Ivors Week celebrations, we asked Nainita to take us through creation of the For Sama soundtrack.

‘For Sama is both an intimate and epic journey into the female experience of war. A love letter from a young mother to her daughter, For Sama tells the story of Waad Al-Kateab’s life through five years of the uprising in Aleppo, Syria as she falls in love, gets married and gives birth to Sama, all while the cataclysmic conflict rises around her.

‘Her camera captures incredible stories of loss, laughter and survival as Waad wrestles with an impossible choice whether or not to flee the city to protect her daughter’s life, when leaving means abandoning the struggle for freedom for which she has already sacrificed so much.

‘The Oscar-nominated and BAFTA-winning film is certainly one of the most unique and important films I have ever been involved in.

‘I composed the music for it from my home studio in London and watched the harrowing scenes thousands of times. I still find it incredibly emotional to watch; the footage has an incredible force, emotion and humanity to it that transcends all barriers.’

'I felt this extraordinary responsibility to do the film and Waad’s life story justice, to tell the story in the most true and authentic way possible.'

‘Working with British director Ed Watts, and Waad Al-Kateab who filmed, produced and lived through the Syrian uprising, I felt this extraordinary responsibility to do the film and Waad’s life story justice, to tell the story in the most true and authentic way possible.

‘I was recommended to the co-director Ed, for the project by a sound editor friend and was sent some rough scenes to watch. I was expecting to work on a ‘war documentary’ set in the middle east. However, I was pretty mesmerised by the approach and access they had. Waad came across as a remarkable human being just from the videos. I felt I simply had to work on the project.

‘I then went in for a meeting. When I entered the edit suite, Waad was on the floor laughing and eating ice-cream. I was quite stunned and overwhelmed when we first met – it was a bit like meeting your hero in the flesh!

‘Being involved in the edit for 18 months writing from a very early stage, I wrote a huge amount of music with a sound palette encompassing electronics, sound design, and orchestral elements with a touch of ethnicity. In fact, I scored it in three different ways over that period.

‘Normally on a 60-minute documentary I’m involved from anything between four and 12 weeks.'

‘The scenes were so powerful that we kept stripping the music back to the point where at times, the music feels at one with the sound scape.'

‘As the edit progressed and the film evolved and changed narrative, there was much soul searching to find the musical heart of the film. On one level the music had to capture the onslaught of angst, fear, tragedy, hope and feeling of pathos that was prevalent.

‘The initial brief was to write a rich and cinematic score – like a ‘Hollywood war movie’.

‘However, when the focal point of the story became Sama, Waad’s young daughter, everything clicked into place. We realised that the relationship between a mother and her daughter would help us understand what it means to be human in extreme situations and that’s what I had to bring out musically, the tenderness of that humanity.

‘As the epic historical events unfold, the music supports Waad’s journey in a very subtle, minimalist and poignant way.

‘The scenes were so powerful that we kept stripping the music back to the point where at times, the music feels at one with the sound scape.

‘I brought in Syrian violinist Alaa Arsheed, a Syrian violinist living as a refugee in Italy. The edginess and soulfulness of his playing perfectly captured the aching heart of Aleppo. We feel the student protesters full of hope represented by his gritty edgy performance.

‘Its only when we reach the end of the film that the music is allowed to truly lead.'

'Despite the minimalism and what may feel like a sparse score, the placement of every note and beat has a huge significance in not over manipulating or ‘over-selling’ the story-telling but supporting the film.'

‘The piece is a very personal piece for Waad as it has elements based on a Syrian folk song that she grew up with.

‘Despite the minimalism and what may feel like a sparse score, the placement of every note and beat has a huge significance in not over manipulating or ‘over-selling’ the story-telling but supporting the film – like the moment when Hamza is by Waad’s side in hospital and they hold hands, or the piano theme following the birth scene.

‘I used the piano, violin and cello for intimate emotional themes such as the track Sama Is Born, which has an innocent, plaintive quality that echoes the yearning for hope and peace.

‘The scene, Leaving Home, where they escape towards the end of the film, has a quiet defiance and determination that represents the strength of the community in Aleppo.

‘Funnily, the most powerful scenes in the film actually have no music on them. To me silence is music – where you don’t have music is as important as where you do have music. The Caesarean  birth scene is a ‘heart in your mouth’ scene with no music, and the tenderness of The Miracle Baby counterpoints the tragic and shocking events of the film culminating in a bitter sweet, much needed emotional release of strings.

‘There is one cue on the soundtrack album. The hypnotic hand percussion of Who’s Got Sama, which originally opened the film but didn’t actually end up in it because we felt it was too much. Sama gets lost, amongst the chaos of the hospital bombing, and the piece has an unsettled tension, but the directors wanted it to feel more raw and real, and less manipulative and leading.'

‘You never know how people are going to respond to your work so when we found out that the film was going to receive its world premiere at SXSW, we were surprised, ecstatic but also worried that no one would go to the cinema screenings because it is a tough film to handle emotionally!

‘The film then got into Cannes Film Festival. To have a film screen there has always been a dream of mine. Getting a documentary into Cannes and actually winning was the icing on the cake.

‘Sitting in the Cannes cinema seeing women and grown men crying around me was the moment I realised that we had gone down the right path in trying to reach and connect with people. Seeing them respond to the film in such a strong emotional way was total validation for all the work we had put in.

'Working on it was a transformative experience for me. It was a challenging journey not without its ups and downs in trying to be authentic and truthful to Waad’s life.'

‘Documentary scores tend to be a little brushed under the carpet, and being a subtle minimalist score, I never thought people would actually notice the music in the way they have. I’m proud and still surprised when people comment on it.

‘I’ve learnt a lot about myself and the way in which I approach writing music in such an immersive way. It’s also enabled me to literally travel all over the world in the last year, speaking at conferences, film festivals and working more in the US.

‘It’s definitely opened doors for me and as a result I’ve been working on some lovely projects for Netflix, HBO, BBC over the last year. I’m also branching out into other areas scoring a couple of video games and a giant outdoor light and art installation.

‘I feel very proud and honoured to have been a part of the film. Working on it was a transformative experience for me. It was a challenging journey not without its ups and downs in trying to be authentic and truthful to Waad’s life.’

You can watch For Sama in full on the Channel 4 website.