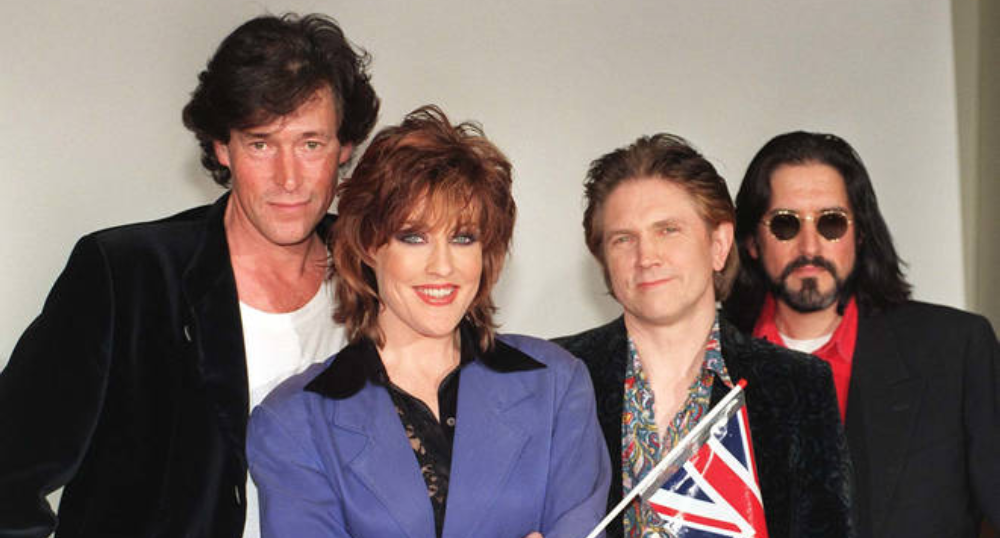 I Wrote That: Love Shine A Light

2022 marks a staggering 25 years since the last UK winner of the Eurovision Song Contest, 1997’s Love Shine A Light by Katrina & The Waves. M Magazine asked the writer behind that smash hit, Kimberley Rew, to break down how it all happened.

I'm not really a ‘Eurovision-style' writer, or part of that music establishment. It was not as part of a plan. Some years I’ve listened to our entries and thought that I don't invest emotionally in the song. But this year, I think Sam Ryder’s song Spaceman is quite subtle, and there’s a lot of feeling in it — he sings it beautifully. I think it's about time for him to do well. Do I mind him winning and breaking our record? He doesn’t need my permission!

There was a bit of weird chemistry in Katrina & The Waves because it was really Alex Cooper’s band. He was the drummer but was essentially in charge. We also had a lead singer with a mind of her own and then there was me — the main songwriter. There was a bit of an imbalance. The dynamics in a band really change over time, and you've got no idea until it happens. You start a band and struggle a lot before you eventually have a hit record, and you think, ‘Oh, great, we've made it,’ then actually still have to get on with your life and try and make something of it. By then, we'd been together for 15 years, and I was trying to write something that nobody could possibly disagree with. It had to work for everybody, and in an odd sort of way I think that helped to make it work for Eurovision.

I was very defensive in writing sessions by then and we would have these big arguments. I was really just the writer and the guitarist, and the others in the band could all write. I think they used to sometimes wonder, ‘Why do we have to have this guy do the songs?’ So, I had to keep justifying myself. Agreeing on anything within Katrina & The Waves was not very likely, but in a way that gave it the energy it needed.

'I wish I knew the answer to what makes a great Eurovision song. I do know you should try and keep it simple and put a lot of genuine feeling to it,'

When I’m composing songs, I like to get the punchline first. Though these days, it's probably more a matter of getting the subject right first. I can't just write [about random subjects] because I'm not going to mean it. I think if it's something I really care about, like getting up in the morning, or not knowing if it's green bin day. Though that sounds a bit like a novelty song, so you've got to be careful. But with Love Shine A Light, well we've all walked on sunshine, you know? This was also something everybody can relate to. The use of repetition was deliberate. There's three verses and I think you change just one word. ‘Love a shine a light in every corner of my heart,’ then it’s in, 'Every corner of my dream' and, 'Every corner of my world. Then you're off — you're all shining a light together. All the factors are there, you just have to hope the audience can sing it well.

I wish I knew the answer to what makes a great Eurovision song. I do know you should try and keep it simple and put a lot of genuine feeling to it. If you do that, it will sound big. No matter how many fireworks and flashing lights you've got, they won't sound as big as what you’re saying.

People keep saying that it was originally written for the Samaritans, and it's easier in some ways to go with that. We didn't really have a big dynamic career where you record an album and know who was going to buy it or who's going to come to the shows. It's much scrappier than that. I think somebody from Samaritans got in touch and said they were looking for a theme song at the time, and I said, ‘Well we've got this song.’ I don't think anything came of it but it's interesting how news works. Once something like that has been said, it keeps coming back.

Entering it into Eurovision is one of the better things that Alex did in the history of the band, to his ever-lasting credit. The system in those days was that anybody could send a cassette with their song to Terry Wogan. He would play the best cassettes on his radio show which had about eight million listeners. Eight million people actually heard a cassette of a demo of Love Shine A Light by Katrina and myself. People were a bit more open minded in those days. The demo was just the two of us — I don't know how that got on the radio and people actually voted for it. There was a show called the Great British Song Contest where the best four would sing their songs on a BBC TV show, and we got through!

I didn’t perform it on stage in Dublin at the actual event. All the vocals had to be live, but everything else could be pre-recorded, so we pre-recorded the backing and had a live orchestra on the day in Dublin conducted by our great friend Don Airey. There were four of us in the band and we had three backing singers. I loved all of them and I still do. But then there was seven of us on stage, so I said, ‘Well I'll just go as 'the writer' instead and sat in the auditorium for the performance. It was weird watching it as a founding member of the group. Music is weird, and things happen that you don’t expect.

'I hope that it is an elemental song about basic hopes and feelings that anybody could sing and relate to.'

Seeing the song become a huge hit overnight wasn’t something that usually happened. It happens more these days then the rest of them are supposedly cast into the outer darkness never to be heard of again. Your fortunes can change in an instant — success when it comes, comes through the media. Before mass media, people were making music, but they were singing in pubs or singing in fields. Then records and the radio came along. Without the media, there probably wouldn't be all these bands with electric guitars and records. Back in our day, people would probably know a lot less songs, but the ones that they did know, they would know a lot better. If you're a big artist, you know you're gonna be in there with the media in the long run. If it's something like Katrina & The Waves, you know you're really only as good as your last hit record, then it all kind of fizzles away again. In that particular instance, it was Katrina's opportunity to have a solo career. I didn't know it at the time — and I only slowly realised — it was actually my opportunity to make music with my wife Lee. I've now been doing that for longer than I was with Katrina & The Waves.

It's always nice when suddenly other people take your songs seriously. I'm still really that teenager who decided to learn to play ‘because I'm gonna be a guitarist in a band, and I've written this song.’ People don't really care because you're not the Beatles or the Rolling Stones. It doesn't sink in that you're basically doing the same as that except obviously, they are far and away better than you. And then, one day you hear your song on the radio, and it'll be after a song by Slade or something like that and that's quite nice.

If you're in a competition it is nice to be the winner. Not many people get to do that. I've done what I wanted to do. I learned to play the guitar and I actually got paid for playing it. And I'm still doing that, and I can make music with my wife who I love and play the music that I want to play, and not as the guitarist in a function band. A lot of people never get any of it. Obviously, I've had to earn it as well, but a lot of people put in the effort and are just as good, and they don't get that reward.

I hope that it is an elemental song about basic hopes and feelings that anybody could sing and relate to. It's difficult to do that without being obvious or simple, or without it being like a cartoon.

Stay up to date with Kimberley Rew