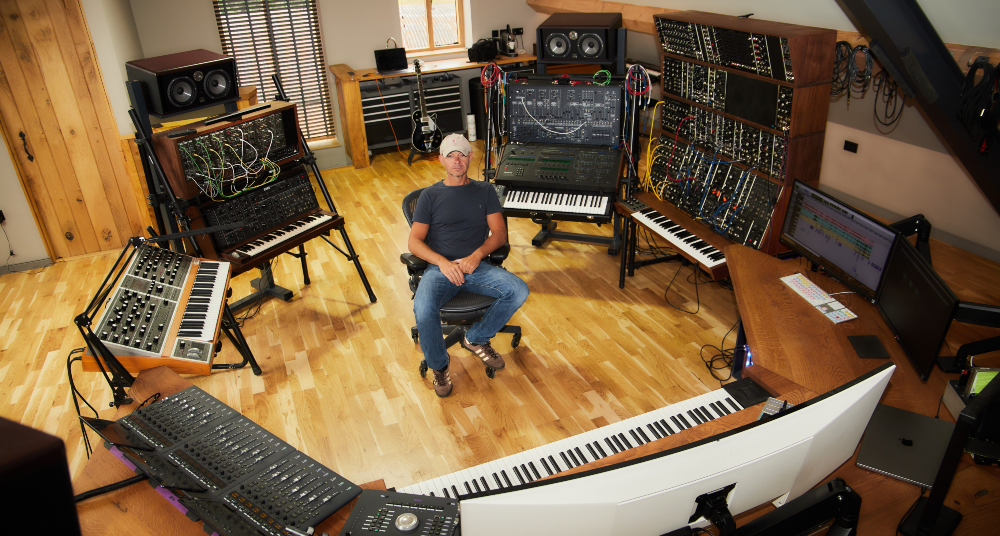 With Big Brother set to return on ITV2 in 2023, M Magazine spoke to Andy Gray about composing one of British TV's most memorable themes.

Most people who were alive and sentient in the UK between the years 2000 and 2018 know Andy Gray’s work.

Whether you watched it or not, Big Brother was a cultural force that was hard to avoid over its initial 17 series run. Its theme song, a racing dance track that brings to mind surveillance and tension, was also released as a single in September 2000, entering the UK charts at No.4. The track also briefly appeared in an episode of Doctor Who. It was, in short, just about everywhere.

It is somewhat surprising, then, that Andy Gray got into songwriting via a happy accident.

‘I was programming for different bands, so I was writing chords and basslines for things and not getting any publishing. Then someone came in one day and said, “You know man, you should be published." I moved towards being a programmer/co-writer, and eventually landed a deal with Universal Publishing,’ he says. ‘Immediately, when you get a big publisher, all that kind of, “Oh, well it’s only a couple of notes,” will disappear as the publisher fights your corner. I started moving more into writing the music and less programming, and that led to producing.’

‘Very rarely do I write music for music’s sake, it’s all music to picture these days and has been for a long, long time.’

The pivotal moment, he says, came when he worked on the album Bunker with DJ Paul Oakenfold. Later the two would join forces as Elementfour to produce the Big Brother theme, but first there was a track called Ready, Steady, Go.

‘It wasn’t for that album. It was kind of knocking around and it got put on that album, and it was majorly synced on everything. Collateral, it was the mini chase on The Bourne Identity, it was on so many Hollywood films. I really enjoyed watching this mini chase with my music on, I thought that was really cool. It got some epic adverts for Saab cars, which were really big ads worldwide. And I knew why that track worked so well.’

‘Everybody said, “Don’t send this, this is not right.” Everybody. Nobody at all said it was good.'

When it came to Big Brother, Andy knew why that song worked so well too. Even if, at first, many people didn’t think it worked as a theme song at all. Andy had been working on the sounds and chords that form the riff of the track for a while, and when the opportunity to pitch for the Big Brother commission came about he thought, ‘I’m going to spend some time on it.’

‘The original is 13 and a half minutes long, and it was a massive club epic. Then I chopped it down to three minutes and sent that in as a pitch,’ he says. ‘Everybody said, “Don’t send this, this is not right.” Everybody. Nobody at all said it was good. Nobody. Me and a mate and my wife liked it, and that was it.’

Almost immediately Philip Edgar-Jones, who ran TV production company Endemol during Big Brother’s run, got in touch. ‘I had to sit in a hotel in London with him, and we discussed that he loved it and that this is what the theme was going to be,' Andy says.

While it might seem like a momentous occasion now in the retelling 22 years later, at the time winning the commission didn’t necessarily seem like a game-changer. After all, before it aired nobody quite knew what Big Brother would be. There wasn’t really anything else in the culture to compare it to. Besides that, the fee itself wasn’t overwhelming.

Of course, it did become a particularly big TV show. Big Brother became a cultural phenomenon, with the theme’s creators picking up royalty cheques each year it aired. And while the show didn’t turn those working on the production side into household names, necessarily, they were inescapably associated with the programme – for good or bad.

‘In one way I loved it. In another way - the “This is Andy, he did Big Brother” thing – I hated it.’ Andy laughs. ‘Luckily, it was an odd piece of music. It was not cheesy music. It might be considered cheesy now because we know it, but at the time it was cool. And the 13 minute dance track, where you only hear that bit once in 13 minutes, was super cool. It was the beginning of progressive house.’

The Big Brother theme could have been the start of a long and lucrative career in TV theme composition, but by his own assessment Andy ‘never exploited’ his role in the pop cultural juggernaut.

‘I did TV theatre and Annie Mac and a few other things, but nothing major. I just carried on with my day to day work really, I went back to bands. Always tried to stay under the radar really, musically, and just work on things I enjoy. Eventually, that lead into more films and I stopped everything else about 10 or 15 years ago,’ he says.

When asked about what it look like when ITV2 brings Big Brother back in 2023, Andy has faith.

‘I’ve got a feeling it might be really good, because they’ve got better at doing it now,’ he says. ‘I don’t think they’ll bring it back and it won’t be good. I think they’ll know how to bring it back for 2023. It’s still the same team behind it, and they’re really, really good at what they do. I think people got bored of it, but it will be interesting to see the format.’

As for whether the new edition will use Andy’s original theme, nothing is set in stone yet. But whether his dance track returns to broadcast in 2023 or not, for generations of TV watchers his work will remain firmly lodged in the collective memory.