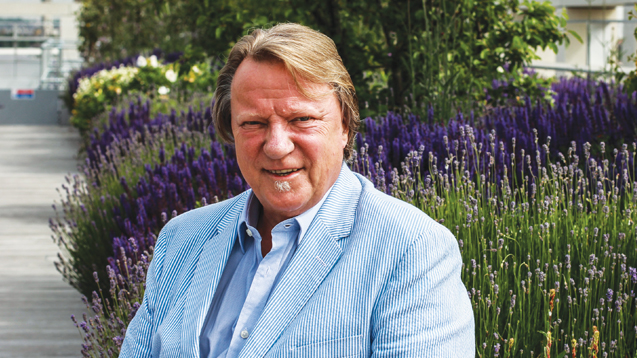 Songwriter and music industry leader Guy Fletcher OBE is hanging up his hat as PRS Chairman after six successful years in the role. Jim Ottewill meets the copyright evangelist to learn of his past, present, and look to the future…

Songwriter and music industry leader Guy Fletcher OBE is hanging up his hat as PRS Chairman after six successful years in the role. Jim Ottewill meets the copyright evangelist to learn of his past, present, and look to the future…

‘You change chemically when you listen to it. It does something to you. It can bring you to tears...’

Guy Fletcher OBE is reflecting on the magical power of a successful song. He’s well placed to comment after over half a century of life lived in music, initially as a writer, then copyright champion as a PRS Board member, and, over the last six years, as Chairman with the collecting society.

Guy’s tenure with PRS will come to an end in 2016, calling time on the latest chapter in a career that began when he picked up the trumpet as a young boy. He honed his musical and compositional skills as a jazz performer before turning his hand to writing music after rock and roll landed ‘like a bombshell’ in the UK at the end of the fifties.

‘To be a young teenager in that time was fantastic,’ he remembers. ‘Because suddenly we had our own music, music designed for us.’

After stints in various vocal groups, a chance meeting led him to work with studio maverick Joe Meek. His experiences with Joe opened the door for him into the industry.

‘It was a complete immersion into Joe’s way of recording,’ says Guy. ‘He was known either as a genius or a lunatic, and I think there was a little bit of both in him. He was like the English equivalent of Phil Spector, except he was recording in a flat in north London. He had a home studio way before anyone else.’

The fledgling songwriter and artist sang on over 100 singles made by Joe in his domestic hit factory.

‘It was great training on making an accessible sound in two and a half to three minutes. I became divorced from anything complicated and focused on pop.’

It was an astute move and the start of an illustrious career, which ramped up after meeting fellow writer Doug Flett in Saville Row in 1965. The pair became a professional songwriting team, inking a publishing deal and going on to write hits for numerous artists including The Hollies, Cliff Richard, Frankie Valli and the Four Seasons as well as original rock and roller, Elvis Presley.

‘We became the first British writers to be recorded by Elvis with Wonderful World, a song we originally wrote for Cliff. It went into his last MGM movie, Live a Little, Love a Little. Amazingly, we got a cable from Colonel Tom Parker, his manager. It said: “We really like that, could you write another one?”’

They obliged with further Elvis hits including The Fair is Moving On and Just Pretend, the latter featuring on the King’s recent The Wonder of You collection. This second album of orchestral re-workings of Elvis hits by the Royal Philharmonic Orchestra reached number one in October this year. Guy believes it’s a fine example of how looking after a copyright effectively can continue to sustain a creator, even, as with this work, it comes 40 years after it was written.

‘Over the years, I’ve always advised songwriters that copyright is their life, it’s their livelihood. You don’t mess about with copyright. Instead, you look after it, you make sure you know what’s going on. I’ve proved it many times over, that songs come back out of the blue to reward you.’

He has indeed, with his Save Me track becoming a hit in the American, South African and Swedish charts thanks to recordings by different artists. This commercial success has been complimented by other awards including an Ivor Novello and ASCAP Award.

Guy’s journey into the business side of the industry began after he and Doug set up their Big Secret Music publishing company in the seventies. While the duo continued to pen eighties hits for Ray Charles, Tom Jones and Joe Cocker, Guy became increasingly involved in educating his fellow songwriters on how to successfully tread the tightrope between commerce and creativity. He was appointed chairman of the British Academy of Songwriters and Composers and Authors (BASCA), representing writers from the worlds of TV and film as well as classical, jazz and pop, before joining the PRS Board in the late nineties and becoming ‘deeply entrenched’ in representing writers. How was the industry when he first joined the society as a director?

‘We had to maintain the value of every bit of our repertoire by getting good rates for broadcasting, for live performance, introducing new tariffs for use of music in public buildings, that sort of thing. Keeping the value of our writers, that’s always been the case and still is. Our core mission hasn’t changed too much - it’s just the landscape is different.’

The advent of digital and online have made for the biggest shifts in the industry since Guy started his time at PRS. But despite this, as he says, his purpose as Chairman has remained the same - to ensure that writers get the most from their music and rights.

Recent years have seen some additional challenges for the collecting society, with PRS marking its centenary year in 2014 and moving location to its new King’s Cross offices.

‘Life has changed for PRS in the last six years probably more than any other time in its history,’ he notes. ‘We’ve moved from Berners Street, where we’d been since 1960, and that was quite something. As was the centenary year. But I think my main achievement has been reaching out to our members who need encouragement, counsel and advice.’

Now as his reign as chairman comes to an end, where does he think the industry is heading next? And what are the biggest challenges for PRS for Music and the world of copyright?

‘The biggest challenge we have is fragmentation of the repertoire. There’s a great benefit in collective management of rights, to keep it valuable. But now there are competitors, people wanting to license themselves.’

However, he’s certainly proud of his work with PRS and how he leaves the society, arguably at a point where the organisation's health has never been better.

‘We really have an altruistic love of the musical creative art form and that’s one of the great things about PRS. We’re here to sustain this for our writers, composers and publishers. We’ve got to continue being an essential part of that ecosystem.
Features
Back to top