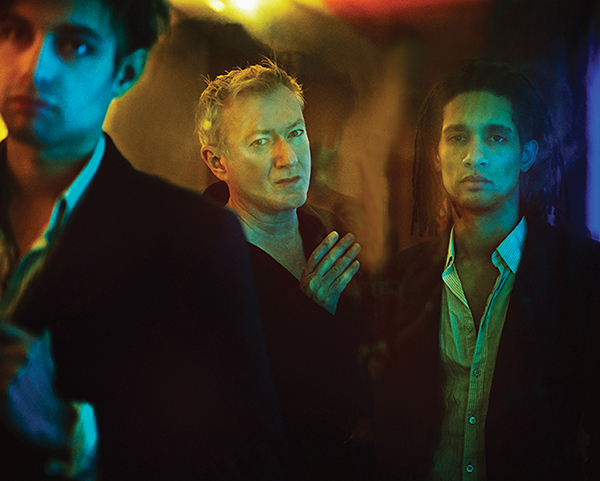 We quiz Gang of Four on their latest album and how the band have still got the creative bit between their teeth...

Gang of Four are one of rock music’s most outspoken and influential groups.

The band broke out of Leeds back in 1978 with iconic debut LP Entertainment!, a powerful statement that blended political wordplay with highly charged punk and funk. Cited as a key influence by Franz Ferdinand and the Red Hot Chilli Peppers, the album still sounds as vital more than 30 years later. The group are now returning in 2015 with new LP What Happens Next, their first without original vocalist Jon King. Guitarist and founding member Andy Gill tell us how the band have still got the creative bit between their teeth…

How did Gang of Four get together?

Me and Jon were arts students at Leeds University. We’d hang out in my bedsit and try to write songs. In the summer of ’76 we went to New York and stayed with Mary Harron. She became a famous film director, making I Shot Andy Warhol and American Psycho. Back then she used to write for New York punk magazines. Ostensibly we were there to look at art and write about our experiences. But we spent a lot of our time at CBGB’s with Joey Ramone propping up the bar on one side and Jon Cale on the other. It all seemed so straightforward, we just thought we’d have a band too.

How was the creative process in the early days?

I’d have an idea, play it on guitar, then try to explain what I was hearing for drums and the bass. That was how we put together music while we were making Entertainment! My role was musical director. I came up against some resistance but I had strong ideas. I was always interested in the song and its performance being a bit like a play with characters in it.

What Happens Next is your new LP - what was the thinking behind it?

Our last album Context came out in 2011. I enjoyed it and was very much thinking about recording new material. We did a few gigs, then Jon decided to leave. I still felt very enthused about writing new music and wanted to continue.

Something I thought about for a while was collaborating with other people. I didn’t know who would sing live but I knew I didn’t want it to be like, ‘There goes the old singer, here’s the new one’.

I was writing and demoing songs, using piano lines to try and nail the melodies. I was talking to my manager and we found John Storey. He initially worked as a session musician but I loved his voice and asked him to play a gig. So we did a semi-secret show at The Lexington in London. It was great and we’ve been all over the place ever since. It was quite, bizarrely, natural.

I did it all in my central London studio where I work as a producer for other bands. I’ve got a big old desk, couple of live rooms and made the Futureheads and Killing Joke albums here. The only downside of working in your own studio is you think you’ve got all the time in the world. You end up mulling over things too much but I think there are benefits to doing things quicker.

How has your political vision changed since the early days?

People have many different interpretations of what political means. With Gang of Four we liked to talk about politics but there’s not one song telling people what to think. The idea of putting yourself on a moral high ground and wagging your finger at those you deem to be less correct than you appals me. We always steered away from that. When you look at early songs, even a song like Ether, which is about Northern Ireland back in the seventies, it’s as much about how we receive information and news through television as it is anything else. The world isn’t black and white, and we don’t see it like that. We see it as this complex thing and that outlook hasn’t changed in the slightest. It remains as true with What Happens Next as any Gang of Four record.

You’re cited as a hugely influential band - which acts do you look to for inspiration?

I’ve found recent tracks by Nine Inch Nails and Kanye West exciting. With a band like alt-j, there’s something amazing about their production. As a producer it’s hard to listen to things transparently. You’re listening to the way it’s made which isn’t how you should necessarily listen to music. But I get ideas from all over the place.

Have you got any top tips you can pass on?

Be disciplined and work hard. It sounds a bit like a teacher doesn’t it? But there’s no other way round it. It is 95 percent perspiration as the saying goes. It really is. Andy Warhol told Lou Reed; ‘Write a song every day’. That’s good advice from the master.